Veteran PAC Aims to Improve Congress on Both Sides

There’s a growing number of post-9/11 veterans from both sides of the political aisle who are determined to retake Capitol Hill and get things done.

Dan Crenshaw is one of them. A 34-year-old former Navy SEAL who deployed overseas five times, Crenshaw emerged from a crowded Republican primary for Texas’ 2nd Congressional District, despite being outspent by $6 million by one of the eight other candidates. The victory moved Crenshaw to a run-off election in May, where he won nearly 70 percent of the vote and the Republican nomination. Getting this far took a lot of hard work, long days and late nights.

Crenshaw was badly wounded in Afghanistan when his interpreter stepped on an IED. The interpreter was killed and Crenshaw lost an eye. He was told he’d probably be blind the rest of his life.

“It was a shock. I went from being on patrol in Afghanistan, being a leader of some of the most elite warriors to ever be on the battlefield, to in a hospital not knowing if I would ever see again,” he says. “Everything I knew, every professional goal I had, was no longer a viable option.”

“We learned problem-solving, we learned leadership, we learned about making hard choices where the stakes couldn’t be higher. We did this in some of the toughest environments in the world.”

Sheer determination put him back on the team five months later, where he worked in an intelligence role until he medically retired in 2016. In 2017 Crenshaw earned a Master of Public Administration degree from the Harvard Kennedy School of Government. Inspired by the grit and resilience of fellow Houstonians in the wake of Hurricane Harvey, he decided in November 2017 to run for Congress despite having no political experience.

“I decided to run for Congress because I wanted to continue my service to the nation and my community. Service was the guide for what I have wanted to do for all of my adult life,” he says. “I saw an opportunity to be out front and lead and make a real impact.”

“The issue of polarization is a systemic problem in our country that requires action now,” says Rye Barcott, a Marine who co-founded With Honor and serves as its CEO. “We all feel this frustration. Congress now has a lower approval rating than any other public institution, and by one measure, is less trusted than a used car salesman.”

Barcott and his two co-founders, post-9/11 veteran Peter Dixon and former Navy officer David Gergen, believe those who served can help resolve the deepening divide that threatens our nation’s future.

“We know that veterans share a common foundation of service that often makes them more willing to seek creative, cross-partisan solutions,” says Dixon, an Iraq and Afghanistan veteran who owns a Silicon Valley defense company. “Politics used to stop at the ‘water’s edge,’ meaning that as Americans, we were on the same team. Veterans realize that we do have real enemies in this world, and they aren’t the fellow Americans sitting across the aisle.”

Candidates supported by With Honor must take a pledge of integrity, civility and courage. The pledge includes a commitment

to meet with someone from another party at least once a month and sponsor legislation with a member of another party at least once a year. Endorsements come with financial support from With Honor’s traditional PAC, as well as independent advertisements from a With Honor Super PAC. With Honor has raised $20 million to help the candidates it supports, including a $10 million donation from Amazon founder and CEO Jeff Bezos.

With Honor’s Super PAC sponsored independent advertising that helped Crenshaw cruise to victory during his run-off election in May.

“During the run-off the race got a bit nasty,” he says. “I was being attacked as being to the left of Barack Obama and Bernie Sanders. With Honor ran ads on TV, radio and in the mail that did a great job getting the truth out in a positive manner that helped us win almost 70-30 on election night.”

READ NEXT: LOGISTICS JOBS ARE PERFECT FOR VETERANS

The resurgence of veterans taking a run at Congress comes at a time when the number of veterans in Congress nears a historic low. Only 18 percent of the 115th Congress once wore the uniform, compared to 64 percent in 1981 and 73 percent in 1971.

About 400 veterans ran for Congress in the primaries, including more than 200 who served after Sept. 11, 2001. With Honor endorsed 33 candidates for the 2018 midterm elections this fall – 14 Republicans and 19 Democrats. Candidates were chosen based on their leadership history and their commitment to the With Honor pledge, Barcott says. Priority was given to candidates with early primaries.

Those endorsements include MJ Hegar, who earned a Purple Heart during one of three deployments to Afghanistan. The Air Force combat search-and-rescue pilot was wounded when a round peppered her right arm and leg with shrapnel and glass during a mission in 2009. Her damaged aircraft crashed a few miles away. When Army helicopters rescued Hegar and her crew, she strapped herself to the skids and returned fire on the Taliban as they flew to safety. Hegar became the second woman ever awarded a Distinguished Flying Cross with Valor.

Unable to fly because of her injuries, Hegar was barred from her next career choice because she was a woman. She separated in 2012, worked in health care and business, got married and started a family.

“I believe that our generation’s great war is not in the Middle East but here on our own soil. We are in a battle for the very soul of our nation.”

Hegar’s inability to serve in a ground combat role because of her gender didn’t sit well for a woman used to breaking down barriers. She sued the Pentagon and lobbied Congress to eliminate the ground combat exclusion rule for women. The ban was lifted in 2013.

“I was able to gather bipartisan support for something that would strengthen our nation, and I was struck by how few people in Washington can do that,” Hegar said. “We need new blood in Congress, fresh ideas, and new leadership.”

She says her children inspired her to seek the Democratic nomination for Texas’ 31st Congressional District. She earned the nomination and an endorsement from With Honor.

“I think that military leaders have a huge advantage in that we have experience working with people with whom we disagree in order to accomplish the mission,” Hegar says. “We are used to putting the good of the country ahead of our own gain, and the significant challenges I faced in training, in Afghanistan, and in my day-to-day dealings with institutionalized discrimination have given me a skill set and a confidence that makes it difficult to rattle or intimidate me.”

“I believe that our generation’s great war is not in the Middle East but here on our own soil,” Hegar says. “We are in a battle for the very soul of our nation. We fight for freedom of the press, civil liberties, racial and gender equality, and we demand our elected officials respect the dignity of the office they hold and the authority of our constitution.”

Veterans running for Congress can face significant hurdles, particularly post-9/11 veterans who have spent years away from home during their military service. Time away from districts they seek to represent means they often lack the deep connections their civilian opponents may have.

“Money and political networks have become rising barriers to entry for young Americans who wish to run for office and are not independently wealthy,” Dixon says. “During the past 20 years, the average cost of a congressional race has more than quadrupled. Furthermore, veterans, having lived outside of their home districts during their military service in places like Iraq and Afghanistan, often don’t have access to affluent fundraising and political circles when they return home.” 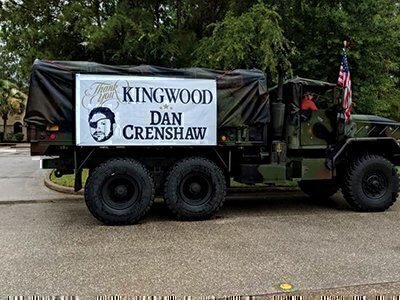 Florent Groberg, who earned a Medal of Honor in Afghanistan and serves as an advisor to With Honor, believes the advantages veterans offer far outweigh their challenges.

“An understanding of the reality of war. A commitment to our nation. A work ethic that is unparalleled. A different vision and mindset. An opportunity for the next generation to have a voice. Patriotism.”

“We learned problem solving, we learned leadership, we learned about making hard choices where the stakes couldn’t be higher. We did this in some of the toughest environments in the world,” he says. “We did this as a member of a diverse team, where race, religion, orientation, didn’t matter. Most of us did this before the age of 25. If we take what we learned in the service and apply it in business, in our community, we will be the leaders the U.S. needs, like our grandfathers were.”

You Can Vote From Anywhere!

For information on voting while serving in the military, visit the Federal Voting Assistance Program’s website at fvap.gov

READ NEXT: EMPLOYMENT SUCCESS AFTER THE MILITARY