Well, here it is, the ten funniest war movie characters of all time. Oddballs. Gallows humor. Hard asses. In exact order. Presented as fact. With absolutely no room for improvement. Don’t think so? Take it up with the complaint department below, because now that we think of it, everything is subjective and you probably have a very good idea that was missed by this  list.

Hearing an undercover soldier from the deep south try to say “Gorlami” in an Italian accent is absolute comedic bliss. Watching him scalp some Nazis is bliss of another kind. Brad Pitt anchors this list off with this classy badass in the instant classic from the mind of Tarantino. 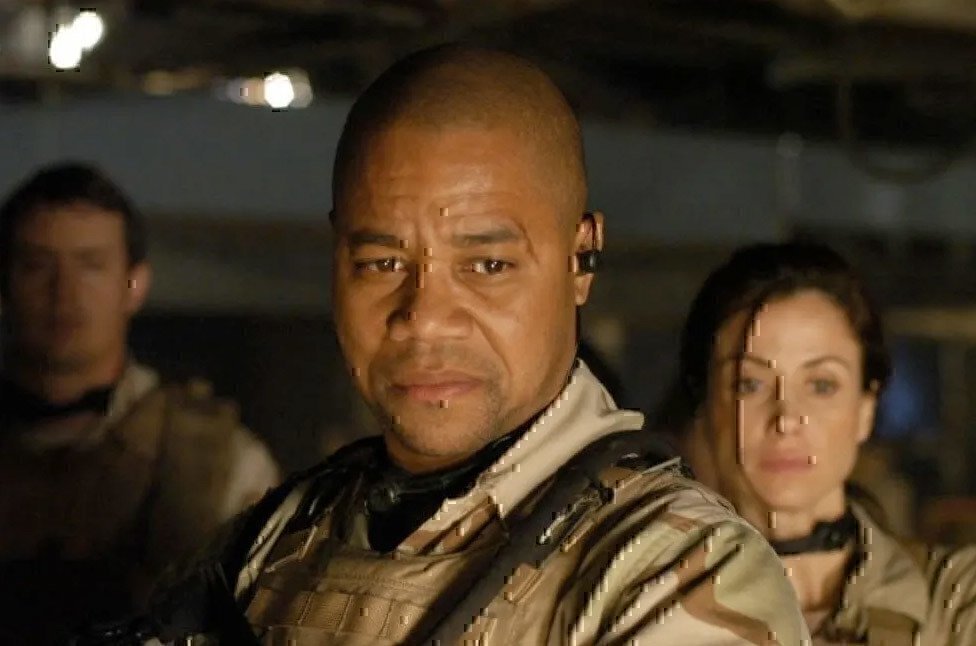 Okay, so this one isn’t technically a comedy. But in the same way that a tomato isn’t “technically” a vegetable. If you haven’t  heard of this movie– you are not alone. In fact, you are very, very crowded. I don’t think JK Simmons has heard of this movie, and he is in it. Watch it if you want to see Cuba Gooding: kill a guy with a shower curtain, call himself “the wolf” for no discernible reason, and threaten to murder the entire family of an innocent shopkeeper who SAVED HIS LIFE. It has a 4% on Rotten Tomatoes, which is generous.

The idea of getting a wounded Marine’s mind off a shoulder wound by breaking his pinky is something only Major Payne could make funny. That and comforting a child with a hell-torn Fallujah version of “The Little Engine that Could.” This movie is silly. This movie is stupid. But so are you if you don’t laugh at it. 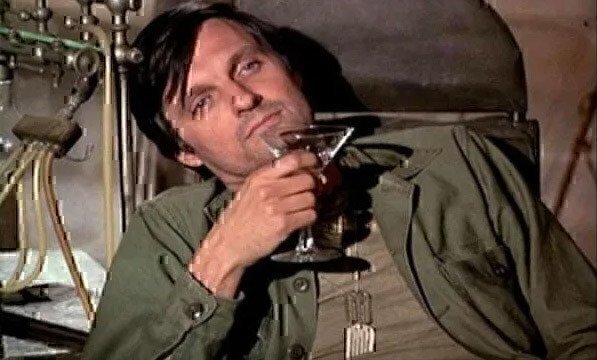 Uh oh, this one’s not even a movie–don’t care— there’s no way a list about the funniest war characters was going to leave out M*A*S*H. While there are probably 3-4 characters from M*A*S*H that could make the list (I’ll give you a hint, one wears a dress, and it’s not Margaret Houlihan). However, Alan Alda is so effortlessly sarcastic in this, that he left an impression on all dads in the US born between 1950-1969 with a TV. 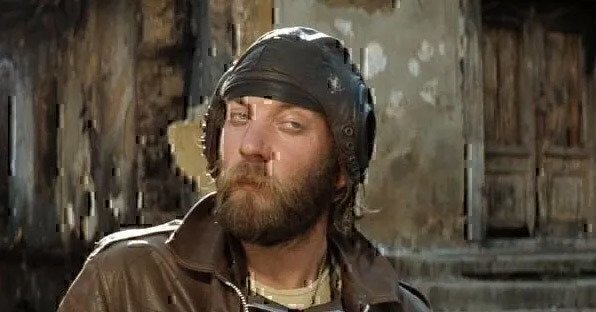 I don’t think my father would continue to claim me as his own if I didn’t include Kelly’s Heroes on here. Donald Sutherland as “Oddball” is an offbeat performance which really captures the existentialism of conflict. Some men are fighting, some men are repairing a downed vehicle–Oddball is just “drinking wine and eating cheese and catching some rays, ya know?”

6. Sam Elliot in “We Were Soldiers” 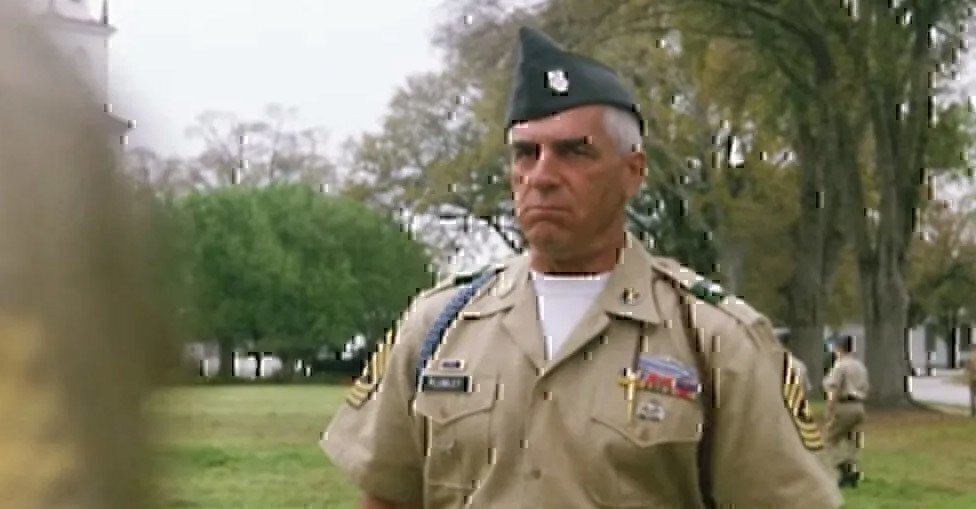 “Good morning Sgt. Major.” … “How do you know what kind of God damn day it is?” Sam Elliot (a.k.a the voice in those “Coors Banquet Beer” commercials) keeps this entire movie on its feet by his rugged portrayal of the hilariously pissed off Sgt. Major Plumley. Plus his voice sounds like beef jerky tastes. 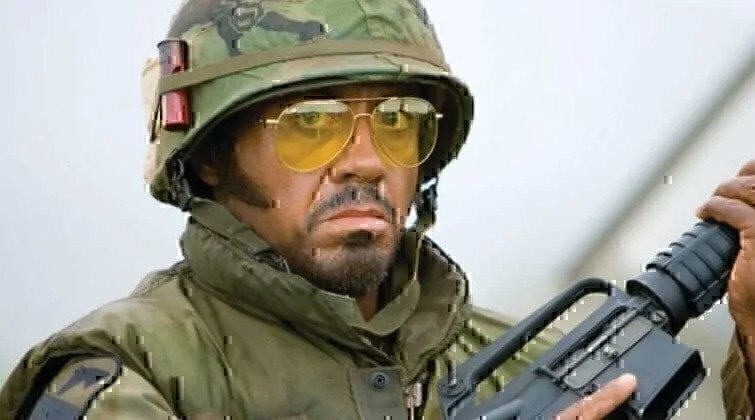 “I know who I am. I’m a dude playing a dude disguised as another dude.” This line alone about sums up Robert Downey Jr.’s “Tropic Thunder” performance. One of only three other Oscar-nominated performances on this list (almost, Cuba), Robert Downey’s ballsy meta performance is as controversial as it is hilarious. 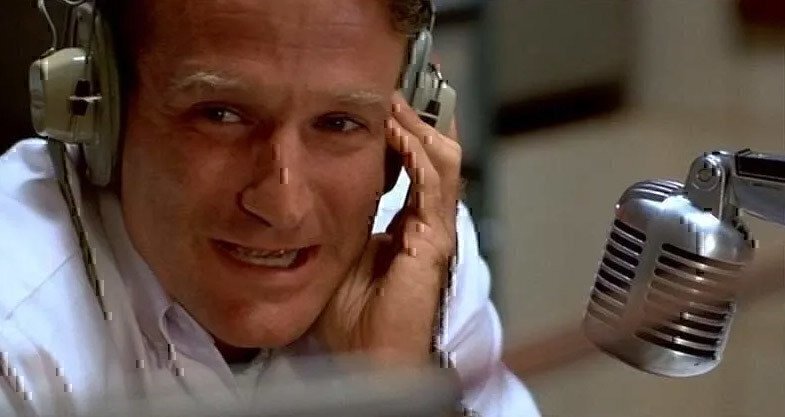 This one is just a requirement. Like it feels like if it wasn’t on here, there would (rightfully) be an uproar. Not to say that Robin Williams isn’t hysterical in this–he is. In fact, he’s so good that it’s an unexciting pick. It’s like, duh, Good Morning Vietnam is amazing, and Robin Williams is unbelievably funny. And he improvised a lot of it. It should be higher, but this list is subjective, and nothing matters. 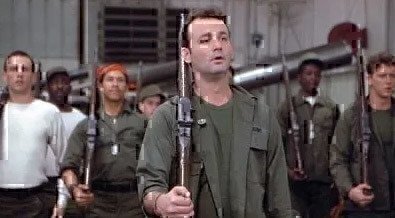 This role spawned (or popularized, rather) an entire archetype in comedies–the slack off reluctantly leading a rebellion of misfits. Bill Murray’s portrayal of John Winger is played seemingly with a wink to the audience throughout the whole movie. The character was even adapted by Dan Harmon as the lead in the popular series “Community” and named “Jeff Winger.” 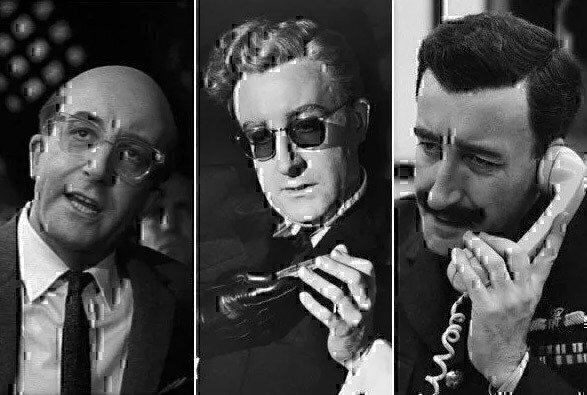 Everything is up for debate except for this spot. Peter Sellers plays three completely unique and separate characters, and they all have made me spackle my laptop screen with Doritos bits with laughter. The scene where Peter Sellers plays “Dr.Strangelove” an obvious Nazi scientist who is eternally fighting against one arm that is permanently possessed with exaltation for the Third Reich. It is physical comedy at its purest form. Legend has it that this scene is the only thing that has ever made Stanley Kubrick laugh on set–and apparently to tears. Even in the final cut, you can see some background actors bite their lips to stop smiling, and hear stifled laughter.