The Medal of Honor Story of the Real Life Forrest Gump 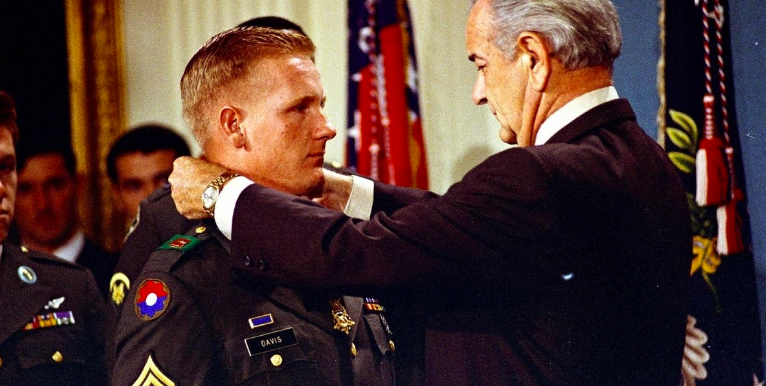 It’s a touching scene that even the most stoic of us will get choked up over. The titular character runs into enemy fire to save his brothers-in-arms. Without hesitation, he carries each wounded soldier to safety — all while being severely wounded.

That fantastic scene earned Forrest Gump‘s place in cinematic history. What makes this and the rest of Forrest Gump’s Army scenes so great is that they were entirely based off the career of Sgt. First Class Sammy L. Davis, to include the Medal of Honor ceremony.

Unlike Gump, Davis was an artilleryman. His fateful night began around 2AM when the enemy engaged Davis’ unit with a 30-minute barrage of mortar fire. The moment he got the all clear, he showed them what his 105mm Howitzer could do. He fired the first beehive shot and the enemy returned fire with a recoil-less rifle that hit eight inches from his head.

After recovering from an insanely close call, he grabbed his M-16 and fired on the advancing enemy. When he fired all but three rounds, he then turned back to his Howitzer to get off that beehive. The weapon had taken a heavy beating and much of the powder was scattered. But he loaded what he could find. Under normal circumstances, seven bags of powder is fine. Davis loaded nearly 21. It almost destroyed the cannon but also devastated the enemy.

READ NEXT: THIS COULD BE THE NEXT SEAL MINI SUB

The Howitzer blew up and rolled over Davis and nearly 30 fragments of the beehive were in his back. Davis, just like Gump would in the film, took the shrapnel in the buttocks. His body and his cannon were in terrible condition.

That’s when he noticed some American G.I.s on the other side of the river.

He had been shot in the leg and was partially deafened, his ribs were broken and his spine fractured, and there was still plenty of beehive in his back — yet he grabbed his Army-issued air mattress and swam to his brothers without even a second’s thought.

Surrounded by enemies, he had to sneak around with nothing but an air mattress until he found the soldier waving at him. There, he found three wounded men in a foxhole — two were ambulatory but one was shot in the head and somehow still holding on. Davis grabbed the soldier with the head wound and placed him on the mattress and the four of them headed back across to safety.

Much of the film touches on Sammy L. Davis’ life, which he openly embraces. Every military scene is based off Davis, including the scene where President Lyndon B. Johnson bestows the Medal of Honor upon Forrest Gump. That was literally Sammy Davis under Tom Hank’s CGI face. Granted, Davis is a much more eloquent speaker.

READ NEXT: 7 THINGS YOU THOUGHT ABOUT ON WATCH IN A FIGHTING HOLE

Article Name
The Medal of Honor Story of the Real Life Forrest Gump
Description
The military portion of the classic movie is somewhat based on the actions of Sammy Davis, who would receive the Medal of Honor for his courageous actions during the Vietnam War.
Author
Eric Milzarski
Publisher Name
We Are The Mighty