7 Things You Thought About On Watch in a Fighting Hole 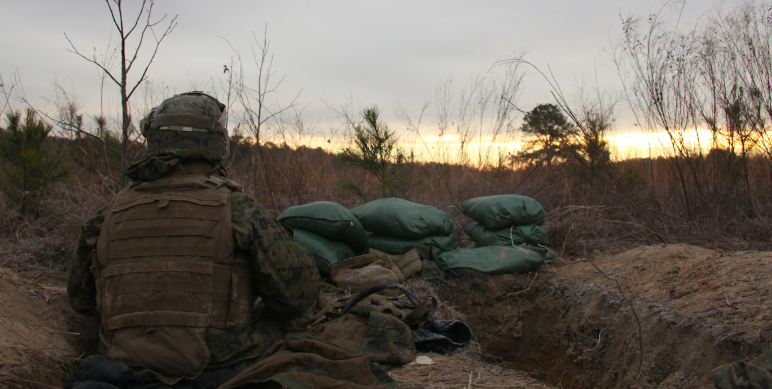 If nothing else has made you question your choice to join the infantry before, digging a fighting hole definitely will. It’s always miserable, it’s extremely time consuming, and there’s always a giant rock waiting for you once you’re halfway down. But, once you get that hole dug, it’s smooth sailing. Now, all you have to do is deal with the sleep deprivation and crummy weather.

Defensive postures allow your unit time to “rest” and recover after launching an offensive. Basically, you take some ground from the enemy and then hold it until your unit is ready to continue pushing the enemy back. If you’re not in an urban environment, you’ll have to dig two-person fighting holes in order to hold your ground. The enemy is likely going to return (with reinforcements) to try and retake some real estate — your unit will be entrenched, waiting for them.

Keep in mind that you’ll be in that position for at least 24 hours, so you’ll have lots of time to think about your life from every angle. Here are some of the things that’ll race through your mind during that time:

1. What you should have joined instead

This is at the top of the list because digging a fighting hole and then sitting in it, deprived of sleep, will make you seriously question why you joined the infantry. You might even think about how much nicer you would’ve had it in the Air Force — or literally anything else that wouldn’t land you in that damned fighting hole.

Meanwhile, in the Air Force…

You’re likely to spend the majority of your time in the middle of the night, which means you’ll likely experience the coldest temperatures that environment has to offer. Joy!

If you don’t it gets cold in the desert or the jungle, you’ll become acquainted real quick. Since God basically hates the infantry, chances are it’s going to rain or, if you’re on a mountain, there will be a blizzard.

If digging the hole wasn’t enough, this will definitely bring you back to list item #1.

3. Where your warming layers are

If you’re somewhere cold and rainy, you’ll be struggling to remember where you put your warmest layers are and if you can get to it without giving up your security for too long in the process. Chances are, your pack will be too far away and you’re sh*t out of luck.

After this realization, you’ll spend the rest of your watch experiencing every stage of grief.

4. When, exactly, is too soon to wake up relief

You’ll convince yourself you need to wake your buddy up 20 to 45 minutes before you actually need to because they “need time to get ready.” In reality, you just want to share the misery.

They’ll look so peaceful when you get there, too.

Since you’ll want to keep your mind off the weather, you’ll spend some time speculating on the fun your friends are having while you suffer. This will lead to thinking about what and who you want to do when you go home next.

You’ll imagine this moment over and over…

If you didn’t bring snacks, you’ll be hungry on watch. This will lead you to thinking about all the food in the world. You’ll make deals with yourself, promising to eat it all once you get back to civilization.

Anything is better than what you’re eating out there.

7. How to get away with smoking

This doesn’t apply to everyone, of course, but it applies to a lot of us. Even if you don’t smoke when you first join, after you dig a fighting hole, you might start considering it. Those that already smoke will be thinking up ways to get away with it. After all, you run a huge risk of compromising your position.

You’ll figure it out, no problem.