75th Anniversary: 10 Things You Don’t Know About the Battle of Iwo Jima

The Marines will be the first to tell you they have “fought in every clime and place” from the “halls of Montezuma to the shores of Tripoli.” The history of the Corps is steeped in legendary heroism and ferocious battles. From Chapultepec to Belleau Wood to Fallujah, the Marines have made a name for themselves throughout our country’s history.

But there is one battle that stands out.

Ask any Marine about Iwo Jima, and you will see instant reverence in their eyes. “Uncommon valor was a common virtue” was the phrase used to describe the spirit of the men that fought that battle.

The landing on Iwo Jima took place 75 years ago today. Located about 750 miles from mainland Japan, Iwo Jima was a volcanic rock that both sides viewed as an important objective of the American’s island-hopping campaign. For the Americans, the airfields there meant both easier and shorter routes to mainland Japan as well as helping clear the air of fighters that would intercept such bombers.

The Japanese simply knew that the capture of Iwo put the Americans one step closer to their homeland.

What followed next was one of the most ferocious battles man has ever waged.

In 1543, a ship located the island and landed to explore the newly found land. They gave it the name “Sulphur Island.” When translated roughly to Japanese, it was called Io To, or Iwo Jima. The Japanese didn’t arrive at the island until the end of the 16th century.

2. The Japanese knew they were going to lose the battle.

As a result, the Japanese changed the strategy of the defense of the island to be one of attrition. They figured the Americans would win. They just wanted to make them pay dearly for it. Hideki Tojo, the Prime Minister of Japan, summoned Lieutenant General Tadamichi Kuribayashi to his office and told him to defend Iwo Jima to the last man as a means to buy time. Kuribayashi, who came from a Samurai family, accepted the mission and set off for the island to set up a unique defense that the Americans had not seen yet.

3. The Japanese wanted to dissuade the Americans from attacking the mainland. 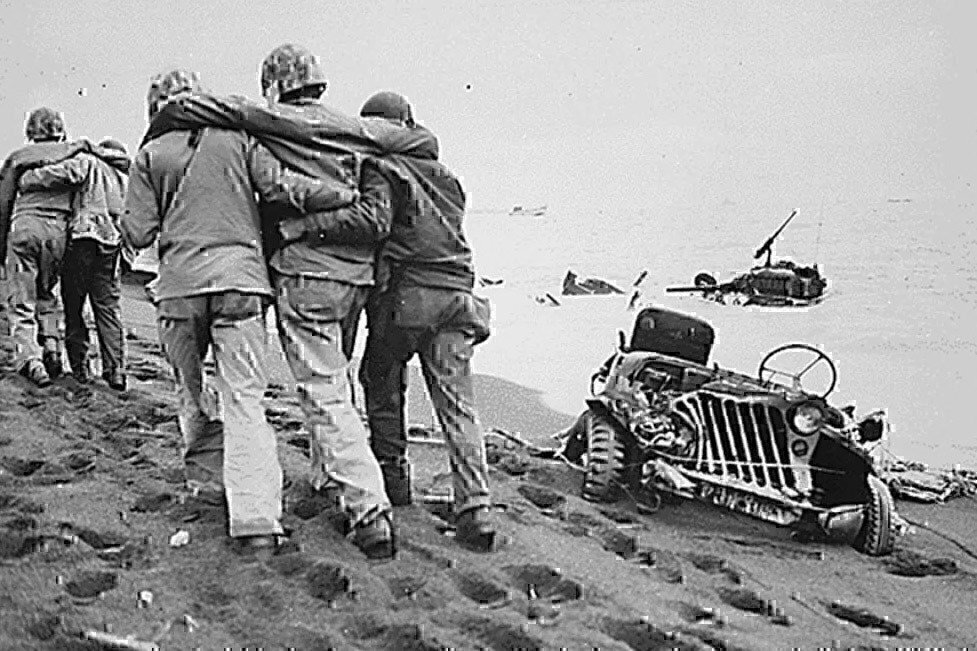 Kuribayashi changed the way the island would be defended. Instead of fighting the Americans on the beaches, he would allow them to land uncontested on the island. He knew the black volcanic sand, which had dunes up to 15 feet tall, could bog down the Americans, so he figured to let them all on before opening fire. He had the beach zeroed in by artillery and mortars to the last inch. On the island’s interior, he set up defensive positions in a new way. The fortifications and tunnels allowed the Japanese soldiers to retake positions that had already been overrun. On an island that was just eight square miles, there were over 11 miles of tunnels the Japanese could use.

The intended effect was to inflict as much damage as possible to the American forces. By dragging out this conflict and inflicting casualties, the Japanese hoped that the carnage would dissuade the U.S. from attacking the Japanese mainland.

4. The US thought the battle would last only a week.

It’s not that the Americans thought less of the Japanese. It was at this point they thought they knew what they were going to do. After victories through the South Pacific from Guadalcanal to the Philippines, the U.S. military thought they had a winning plan. Start with a devastating naval bombardment, get the men on the beach, provide them with close air support, and take the airfields quickly. They did that but realized way too soon that the naval bombardment didn’t do much damage, the Japanese actually wanted the Americans to land, and that they had to fight for every square inch of the island. The initial weeklong projection turned out to be five weeks of some of the worst fighting the Americans had seen to that point.

5. The beach was hell on earth. 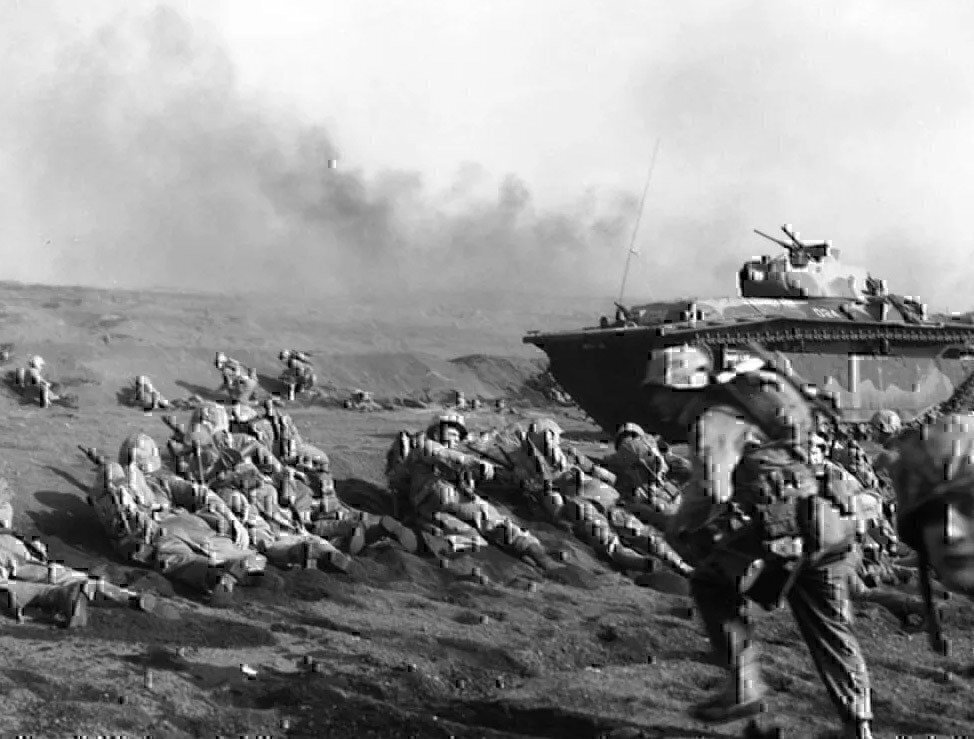 After taking the naval and air bombardment, the Japanese allowed the Marines to congregate on the beach. Many thought that the Japanese were killed in the immense bombardment, but unfortunately, they were wrong. Kuribayashi told his troops to wait one hour before opening fire. When the Marines were massed on the beach and started to move forward slowly through the volcanic ash, they were shocked to learn the hard way that the Japanese had every inch of the beach sighted in and had to race off the beach while under intense artillery, mortar, and machine gun fire.

Within a minute a mortar shell exploded among the group … his left foot and ankle hung from his leg, held on by a ribbon of flesh … Within minutes a second round landed near him and fragments tore into his other leg. For nearly an hour he wondered where the next shell would land. He was soon to find out as a shell burst almost on top of him, wounding him for the third time in the shoulder. Almost at once another explosion bounced him several feet into the air and hot shards ripped into both thighs … as he lifted his arm to look at his watch a mortar shell exploded only feet away and blasted the watch from his wrist and tore a large jagged hole in his forearm: “I was beginning to know what it must be like to be crucified,” he was later to say.

By the end of the first day, over 30,000 Marines had landed, and the island was cut into two. However, upon seeing the initial casualty lists from the day’s carnage, General Howlin’ Mad Smith remarked, “I don’t know who he is, but the Japanese general running this show is one smart bastard.”

6. For the only time in the war, the Marines had more casualties than the Japanese.

The Marines went into Iwo Jima with a 3:1 advantage in terms of troops. At the end of the five-week battle, they would have 26,000 casualties versus 18,000 for the Japanese. One of the men killed on the beach was Gunnery Sergeant John Basilone. Basilone was a hero on Guadalcanal who earned the Medal of Honor for his actions there. As the intense bombardment came down, Basilone was last seen yelling for men to move off the beach. He was among the many killed that day. By the end of the battle, many more would die. While the Marines had more casualties than the Japanese, they had about one third less killed. Of the 18,000 Japanese soldiers who fought on the island, only 221 were captured. Most of the captured were either knocked unconscious or incapacitated.

7. There were few banzai charges so the Americans improvised.

The Americans factored in banzai or human wave attacks when they did their initial estimate of the length of the battle. In fact, the Japanese general prohibited such attacks as he knew that they didn’t work. He wanted his men to fight to the death, but he wanted to take as many Americans out as they could.

The Americans wouldn’t deal with that. Realizing quickly that firearms and close air support weren’t cutting it, the Marines adapted on the fly as they have throughout their history. They started using flamethrowers, (badass men as well as on modified tanks) to eradicate the Japanese. Once they realized the tunnel system allowed the enemy to reoccupy positions that had been overtaken, they just started flame-throwing everything that they saw… over and over again.

It worked. The Japanese tunnel system ended up becoming the graves of countless Japanese soldiers. Only toward the end, when food and supplies were low, did Kuribayashi allow banzai charges so his men would die “with honor.”

8. Americans at home thought the battle was over fast. 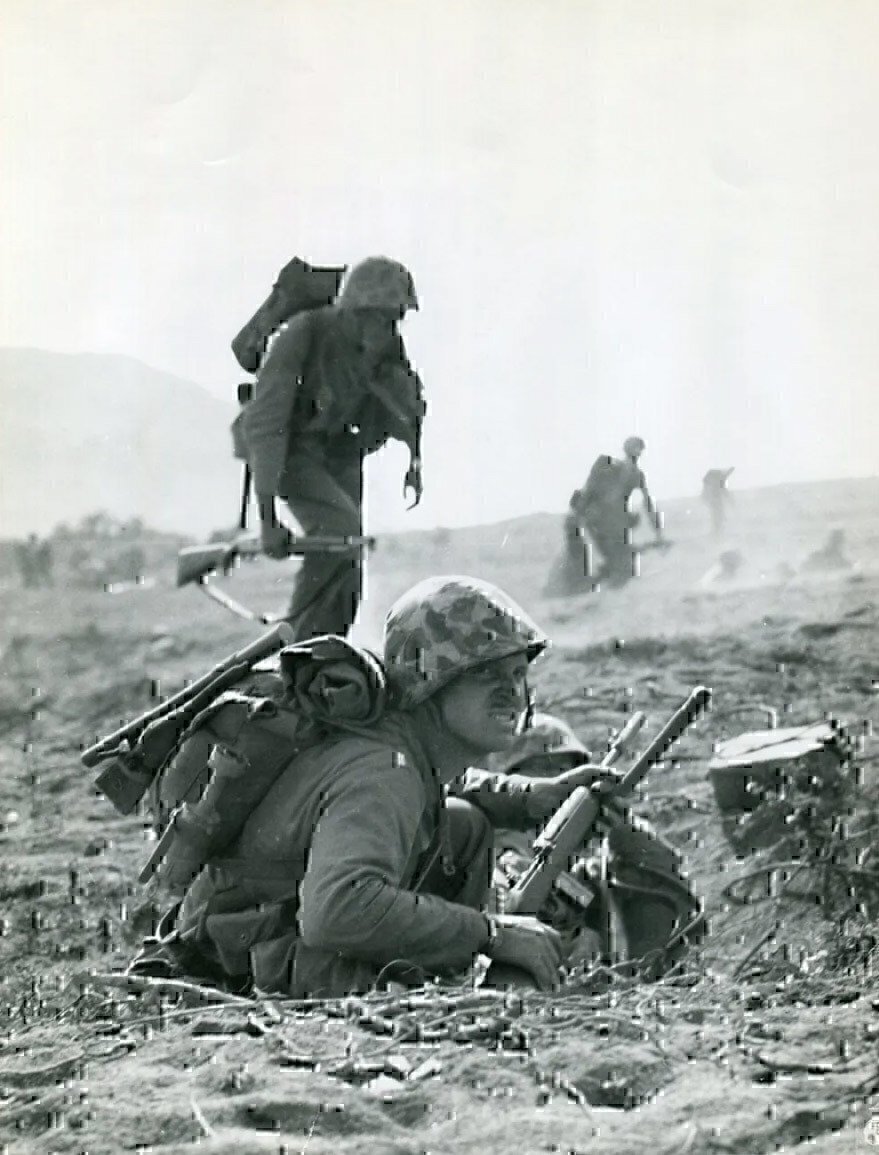 The iconic photo by Joe Rosenthal, which showed Marines hoisting the flag on Mt. Suribachi, was the American people’s first view of the battle. It was taken on February 23, four days after the initial assault. The picture was released by the AP two days later, where it was published by virtually every newspaper in the free world. In an age, before social media, television, and satellite feeds, many assumed the battle was over based on the picture. It wasn’t.

As the battle raged on and the casualties mounted, Americans at home wondered why so many boys had to die for a small piece of rock.

9. How important was Iwo Jima and the effect of the battle?

Even before the battle’s conclusion, the U.S. military started using the airfields on Iwo Jima for bombing runs on Japan. Planes that were damaged during their runs now had a shorter trip to base, so they had a better chance of surviving. Fighters could now use the base to refuel, and accompany their bombers to Japan. However, people wondered if the same things could have happened had the Americans attacked elsewhere. The Americans also found out that the radar used by the Japanese on Iwo was not really beneficial as the Japanese already had other radar installations that did the same job. The battle’s need was a contentious matter as early as the end of hostilities on Iwo Jima.

One effect the battle did have was on the end of the war. After Iwo Jima, another horrible battle took place on Okinawa. By this point, the Japanese realized that Kuribayashi’s strategy worked. They could inflict major losses on the Americans and turn public opinion against the war. The Americans learned too and proceeded to unleash longer more devastating bombardments on Okinawa in the lead-up and more aggressive use of flamethrowers and incendiary devices on Japanese soldiers and civilians caught in the crossfire, to horrific results.

When the final obstacle to the Japanese mainland fell, Americans looked at other ways to end the war and avoid the bloodbath that Iwo Jima and Okinawa wrought.

They found it in recently developed atomic weapons.

10. Uncommon valor was a common virtue.

Regardless of if Iwo Jima was strategically worth it, the Marines still viewed the battle as a badge of honor. They were not part of the planning or strategy but were told to take the island. They did.

They asked for a 10-day bombardment and got three. They adapted to a terrible situation and came out ahead. They looked death in the face and, as Marines usually do, didn’t even get fazed.

Eighty-two Medals of Honor were awarded to Marines during World War II. Twenty-two of them (28%) were earned on Iwo Jima alone. There is only one awardee alive today, Woody Williams, who earned the medal for using his flamethrower to wipe out numerous enemy emplacements.

On this 75th anniversary, to those who fought in that terrible battle and to the families left behind, We Are the Mighty salutes you.