From Homeless Veteran to Change Maker for Women Veterans

To hear Navy veteran Ginger Miller’s story is to hear an inspiring tale of transformation. After all, she shepherded her family out of homelessness, and her subsequent mission to serve women veterans has been recognized by two presidents.

But listen to her story a little more, and you’ll see that it’s more than inspiring.

That’s because Miller, a self-described “hard charger,” doesn’t just watch a problem from the sidelines; she takes action, and people follow.

Resolved to right the ship, Miller had planned to make a career in the Navy. But in 1992, she was medically discharged.

Her transition was difficult, lacking in substantial preparation and guidance. Plus, her husband, who had separated from the Marine Corps not long before, suffered from PTSD.

“We were both young, we were both unskilled,” Miller recalled. “I was pregnant at the time of my medical discharge.”

They lived with relatives, but the arrangement didn’t last.

The Verge of Homelessness

Soon, they were homeless.

They lived in their car, and periodically stayed in a hotel. Although both Miller and her husband found work, things were still tight.

“What some people don’t realize is that even though you have a little bit of money coming in, you still have to eat,” Miller said. “You still need gas. You still need a place to take a shower. So, the monies that we had were very insufficient.”

Despite this hardship, Miller maintained her resolve.

“My biggest focus was to keep my family together,” she said.

She worked three jobs and went to Hofstra University for her bachelor of science in accounting. She didn’t dwell on her difficulties.

After a year, her family rented a new home. Miller later landed a job at JPMorgan Chase, where she thrived.

But she didn’t settle into a relative calm; she discovered a community who needed her help.

In the early 2000s, Miller began serving veterans. She realized that, by and large, women veterans experienced unique and difficult transitions from the military.

Miller could relate. “It almost feels like, once you get out of the military, you’re in a new battlefield, a battlefield at home,” she said.

To address the issue, Miller formed Women Veterans Interactive in 2011. Originally founded to empower women veterans, Miller has honed the organization’s strategy over the years.

Naina Leo, senior vice president and chief growth officer at Maximus, sits on WVIF’s board. Closely involved in WVIF’s recent development, Leo believes the organization’s strength lies in its history of accomplishment and its clear vision for the future.

“She’s relentless in terms of doing what she needs to do to make the cause happen,” Leo explained.

Miller said that WVIF maximizes impact by providing all services under one umbrella.

“We have the whole gamut,” Miller said, adding, “One of the things that we have really perfected is the outreach and engagement.”

Women veterans get practical support and find relief in a community that understands them.

Miller reflected: “It’s a place where you feel comfortable enough to say, ‘Oh, you know what? That happened to me. But not only did that happen to me, but I’m saying that in a place that can now help me.’”

Action and follow-through are key to WVIF’s effectiveness, Miller said.

WVIF has helped women veterans escape homelessness, find jobs and access health benefits—without ever leaving someone to figure it out for herself.

This empathy is a unique dynamic, Miller said, offering a human connection and a sense of hope and belonging.

“We have your back at Women Veterans Interactive,” Miller said. 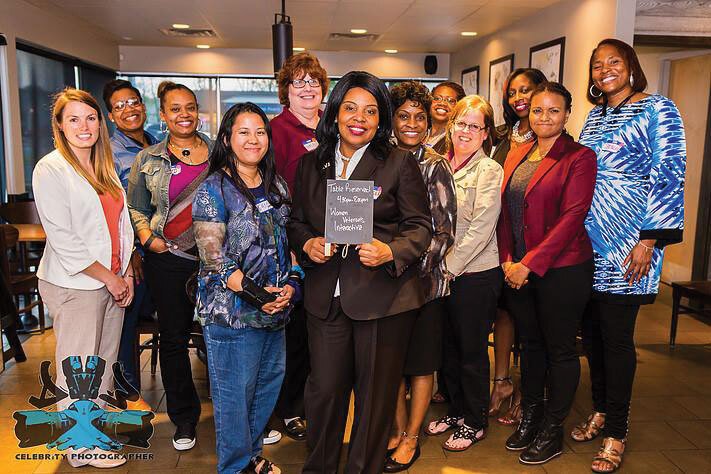 Miller has been recognized across industries, at local and national levels.

President Obama honored her as a White House Champion of Change in 2013, and President Biden appointed her to the USO Board of Governors last year.

But Miller doesn’t relish in the accolades; she figures out new ways to advance WVIF’s mission.

Whether she’s testifying on Capitol Hill or networking with industry leaders, her community’s well being is her priority.

“There’s just so much work to do for the women veteran population,” she said, adding that because WVIF has had “boots on the ground” for so long, they are well equipped to do the work.

Leo said WVIF is in the midst of exciting growth, which will yield a positive impact. And with Miller’s leadership, much can be done.

“She has so much energy, so much passion,” Leo said. “Nothing stops her.”

And if Miller has anything to say about it, nothing will.

How This Veteran Started A Career As A Secret Service Agent

Women Vets, You Earned Your VA Benefits. Are You Using Them?