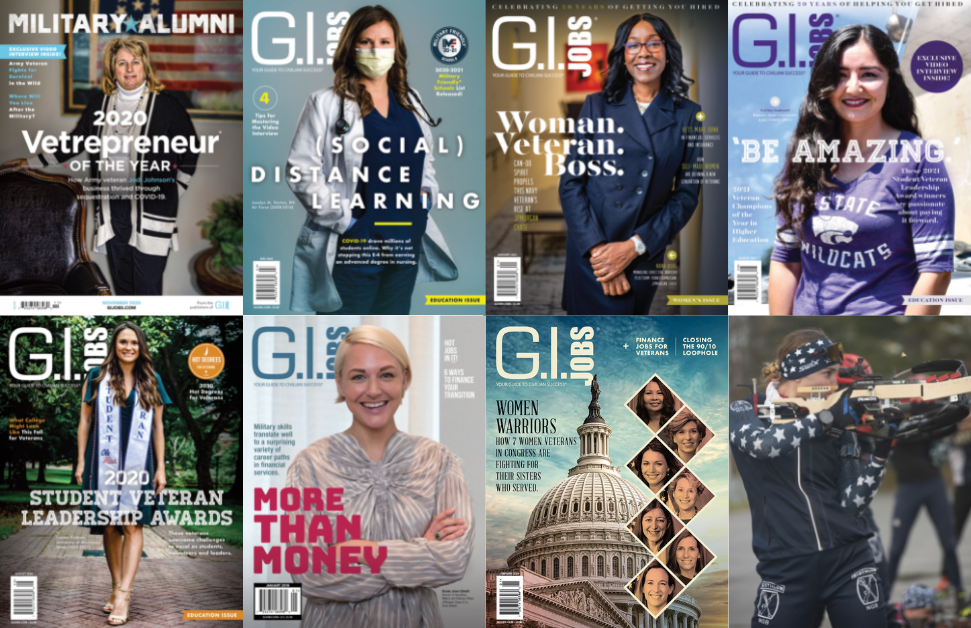 We wanted to start an annual Women Veterans We Love list to feature some of the many female vets whose success stories we’ve shared over the years. What better place to start than with women veterans who have graced the covers of G.I. Jobs Magazine over the last several years?

Why We Love Her: Fatima took on triple majors at KSU and served as a Student Veterans of America leader on campus. Giving back to fellow veterans helped her overcome nagging self-doubt about fitting in.

Why We Love Her: From the US Naval Academy to JPMorgan Chase and beyond, Nana has never been daunted by long odds in male-dominated career fields.

Why We Love Her: Jodi kept the business she built with her husband thriving through sequestration and COVID-19, continuing her mission to serve the men and women in uniform. She was named the 2020 Vetrepreneur® of the Year.

Why We Love Her: Lauren overcame initial struggles to leave a positive impact on the University of Mississippi by the time she graduated. She chose service as a way to rise above her own personal challenges.

Why We Love Her: Jazzlyn refused to allow the COVID-19 pandemic in spring 2020 to derail her quest to advance from an RN to a nurse anesthetist. Shifting to online study, her long-term goal is to work with children.

Why We Love Her: This Iraq war veteran overcame severe combat injuries and dedicated her life to advocating for veterans, first with the VA and now in the US Senate. She serves on the Senate Armed Services Committee.

Why We Love Her: Also a veteran of Iraq, Joni was the first female combat veteran elected to the Senate. She also advocates for veterans through her service on the Senate Armed Services Committee.

Why We Love Her: Tulsi served in the US Congress for eight years on the Foreign Affairs, Armed Services and Homeland Security Committees before becoming the first female combat veteran to ever run for president in 2020.

Why We Love Her: Chrissy is a former businesswoman, teacher and nonprofit leader who now serves her fellow veterans as a member of the US Congress. She’s a member of the House Armed Services Committee and founded the Servicewomen and Women Veterans Congressional Caucus.

Why We Love Her: A former business owner who served on six Navy ships, Elaine was elected to the US House of Representatives in 2018. Today she is vice chair of the House Armed Services Committee and serves on the House Committee on Veterans’ Affairs, among others.

Why We Love Her: Martha was the first female fighter pilot to fly in combat and the first to command a fighter squadron, earning a Bronze Star and six air medals. She represented Arizona in both the US Congress and Senate, and served on the Senate Armed Services Committee.

Why We Love Her: Mikie flew missions as a helicopter pilot for 10 years before separating from the Navy. She earned a law degree and served as a lawyer before being elected to the US Congress in 2018. She sits on the House Armed Services Committee and several others.

Why We Love Her: Brooke was helping fellow veterans get hired at JPMorgan Chase & Co. when she appeared on the cover of G.I. Jobs in January 2018. She founded a nonprofit to help female veterans transition from the military, and today serves as director of learning, development and engagement for the Haskell Company.

Why We Love Her: OK, Deedra hasn’t been on the cover of G.I. Jobs. But when we saw this National Guard member turn in the best-ever performance by an American biathlete during the 2022 Beijing Winter Olympics, we couldn’t resist at least an honorable mention. Deedra finished 7th in the 15km individual, despite only training in the sport since 2017. In all, nine US military members competed in the 2022 Beijing Winter Olympics, including Army Sgt. Emily Sweeney in Luge Singles.

Additionally, G.I. Jobs covers tips and resources for veterans in any aspect of their military transition. Download the G.I. Jobs app to get access to all of the magazines and more veteran resources.