Chuck Yeager is an Air Combat Ace, Daredevil Pilot and Hilarious on Twitter

“He shoots down all these Germans, THEN became the fastest human being alive? And he’s this witty, rugged mountain guy? No way, re-write this.” If Chuck Yeager’s life story were a fictional screenplay, it might be rejected as too unbelievable. Just to put his accomplishments in perspective: he was the first human to travel faster than the speed of sound, and that arguably isn’t even the coolest thing he accomplished.

Born the son of a gas driller in West Virginia, Yeager enlisted in the U.S. Army Air Forces during WWII intending to become a mechanic. Turning wrenches presumably didn’t offer enough mortal danger, so he earned his wings as a fighter pilot. On his eighth combat mission, Yeager was forced to bail out over occupied France when his P-51 fighter was hit by German fire. He was injured and alone in enemy territory, so naturally, this was very bad news…for the Germans.

Yeager, thoroughly pissed off by anything that didn’t involve tormenting the Third Reich from the skies- linked up with the French Resistance and taught them bomb-making skills. He also saved the life of another downed U.S. pilot by amputating the man’s leg with a penknife and carrying him over the mountains to neutral Spain.

Upon returning to England, Yeager headed back to the States to take it easy for the rest of the war. Just kidding: General Eisenhower approved his request to return to combat duty, and Yeager promptly shot down five enemy planes in a single day, earning the rare “ace-in-a-day” status.

He also downed one of the Germans’ infamous Me-262 jet fighters by ambushing the much faster jet when it slowed down for landing, later reflecting “not very sportsmanlike, but what the hell?”

The war might have been over, but Chuck Yeager’s appetite for death-defying aerial feats remained unquenched. He remained on active duty and became a test pilot for the first generation of jet aircraft.

Piloting the experimental X-1 jet in 1947, Yeager became the first human being to travel faster than the speed of sound despite having broken several ribs horseback riding a few days before. He quipped over the radio mid-flight to a colleague, “I’m still wearing my ears and nothing else fell off either.” 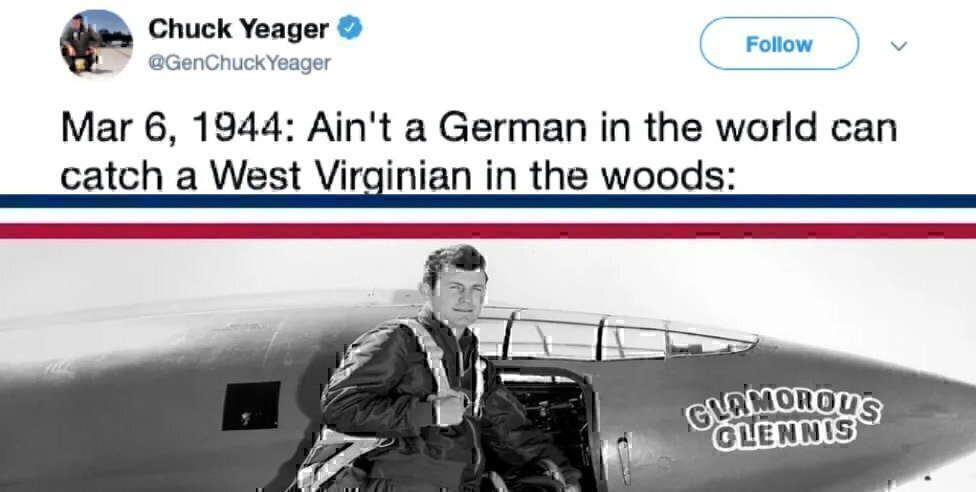 Chuck Yeager next to his experimental jet aircraft.

Yeager’s legendary skill as a pilot was apparently surpassed only by the ice water in his veins that enabled him to repeatedly survive disaster. While setting yet another airspeed record in 1953, his jet began spinning out of control. Despite his head smashing against the canopy, Yeager regained control of the jet and landed safely, because of course he did. By this point, even physics itself had learned not to mess with Chuck Yeager. Yeager went on to multiple command billets within the Air Force.

Despite commanding the Air Force’s astronaut training program, Yeager himself was ineligible for NASA because he lacked any formal education beyond high school (admittedly though, if anyone on earth could be justifiably declared “too cool for school,” it was Chuck Yeager). He also logged 127 combat missions in Vietnam as a bomber pilot because if there’re flying and danger involved, then no way is Chuck Yeager missing out. Yeager retired from the Air Force in 1975 as a brigadier general.

He continued to work as a test pilot after retirement and broke the sound barrier again during his final Air Force flight in 1997. Yeager was portrayed by Sam Shepard in the 1983 film “The Right Stuff” in which he made a cameo as a bartender.

Oh yeah, and then he broke the sound barrier again at age 89 as a passenger in an F-15. Chuck Yeager has broken the sound barrier so many times that one might wonder if it personally wronged him at some point.

Yeager’s legacy lives on in an unexpected way, too. Think about the last time you heard an airline pilot on the intercom. You know that familiar relaxed, deliberate cadence that every pilot seems to speak with? That “pilot voice” began during the early era of jet aircraft when Yeager’s contemporaries began imitating his distinctive West Virginia drawl on the radio. 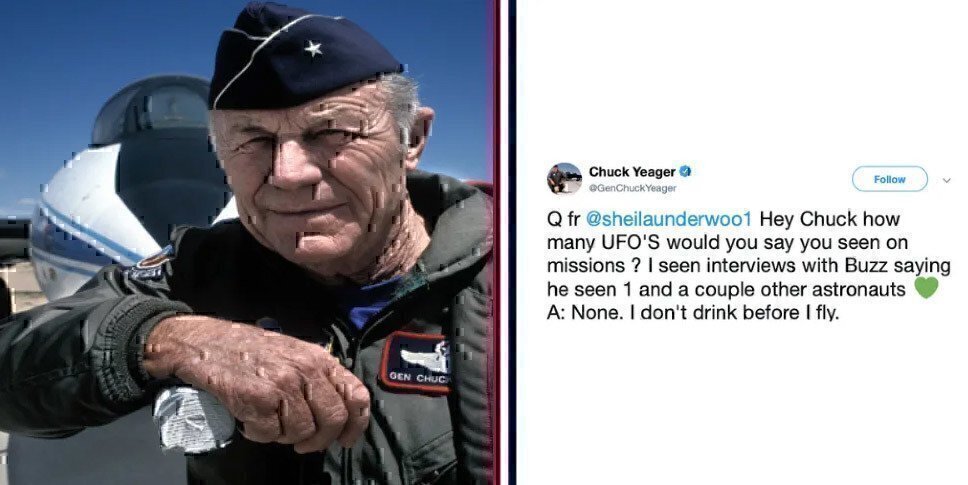 This is the point in the story at which one might expect to hear that General Yeager passed away in such-and-such year.

As of the time of this writing in 2019, Yeager is alive. He is very active on social media where his insights and trademark sense of humor (seriously, he’s hysterical) continue to entertain and inform fans across the world.