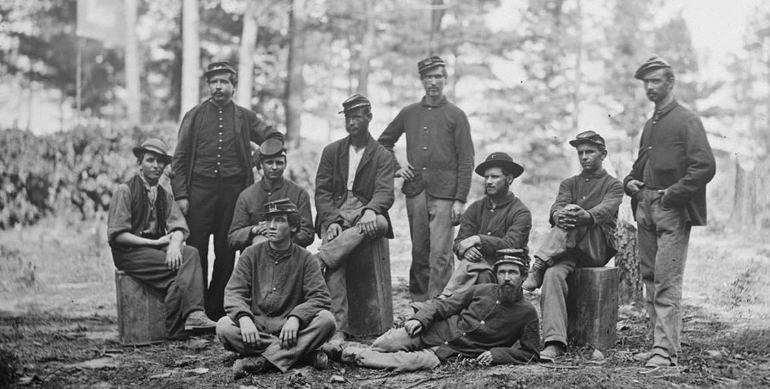 In the chaotic days of the American Civil War, troops from both the sides used to storm the battlefield and go head-to-head in a ruthless campaign to destroy the opposition — an opposition filled with those they once called fellow countrymen. The multi-year war was the deadliest to ever take place on American soil. Approximately 620,000 people were killed during the war, leaving several Southern states in ruin.

To fight a ground war, troops need supplies. But back in the mid-19th century, the way we outfitted our troops was very different from today. Budgets and technologies were limited.

Outside of itchy and hot uniforms, the gear each man carried was very similar on both sides.

The North and South duke it out while fighting in the Civil War.

There was a small variety of weapons to choose from. Most ground troops took up either a Lorenz, Springfield, or a Colt revolving rifle. In order to fire those weapons, they needed ammo, percussion caps, and black powder. All these items were usually stored in a cartridge box, typically mounted on a troop’s belt for easy access.

In the event that the enemy was quickly approaching and there wasn’t any time to reload, troops always kept a sharp bayonet close by. Swords and sabers were commonly used by officers and NCOs to cut through the enemy. When these blades weren’t tearing through blue or grey uniforms, they were used for directing troops.

Two civil War troops are loaded up ready for combat.

It’s reported that many ground troops had to purchase their own mess kits, which usually contained a metal plate and cup. They would often store around three days’ worth of food in their haversacks. Tobacco, fruit, and some soap could also be found in their pouches.

Outside of food and ammo, troops often carried a copy of the Bible, a mirror, a sewing kit, and some playing cards. They didn’t have the weapon systems we have today, but modern infantrymen still carry virtually the same types of gear today — but our versions have seen some upgrades.

READ NEXT: HERE’S THE ORIGIN STORY OF THE BATTLEFIELD CROSS

Article Name
This is the Gear an Average Troop Carried During the Civil War
Description
Military gear has certainly changed a lot over the years. Today troops are equipped with some of the mot advanced gear ever. Life was different back during the Civil War. Here's what the average troop carried.
Author
Tim Kirkpatrick
Publisher Name
We Are The Mighty