Here’s the Origin Story of the Battlefield Cross 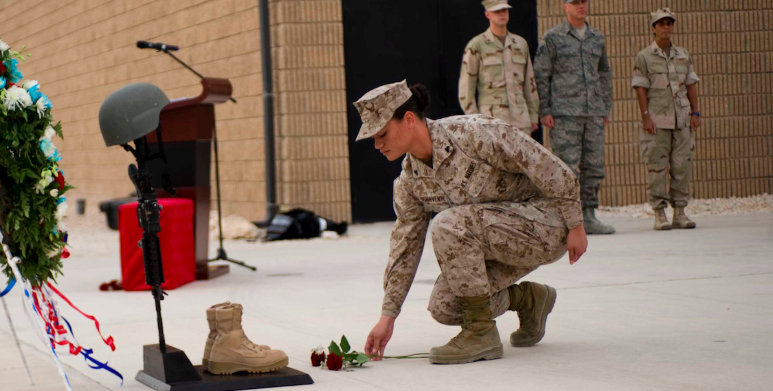 Troops die in battle — it’s an unfortunate fact, but it’s the nature of the job. Countless men and women have sacrificed themselves to protect their fellow service members, their friends and family back home, and the lifestyle we enjoy here in the U.S.

“Battlefield crosses” were created to honor the fallen. A deceased troop’s rifle is planted, barrel-first, into their boots (or, in some cases, the ground) and their helmet is placed atop the rifle. Like all things military, this cross is part of a long-standing tradition — a tradition that has evolved since its first use on the battlefields of the American Civil War.

Despite the fact that it’s called a cross, there’s no single religious ideology attached to the practice.

The tradition of marking the site where a troop met his end began in the Civil War. Historically, large-scale battles meant mass casualties. After armies clashed and the smoke settled, bodies were quickly removed from the field to stop the spread of disease. Blade-cut, wooden plaques were placed at temporary grave sites so that others could pay respects.

The grave marker of Lt. Charles R. Carville, a member of the 165th New York Volunteers who died at Port Hudson May 27, 1863.(Nation Museum of American History)

It wasn’t until World War I, when troops were issued rifles and kevlar helmets, that these wooden blocks were replaced with the crosses as we know them. To many, it was the equipment that made a trooper, so creating a memorial from that same gear was poignant.

In World War II, dog tags were standard, making troop identification easier. The tags were eventually placed on the memorials, giving a name to the troop who once carried the gear on which it was draped. When available, a pair of boots was placed at the bottom of the shrine, too.

A pair of boots, a rifle, a helmet, and some identification — there’s something eerily, symbolically beautiful about the battlefield cross, composed of the core components of a troop.

Today, given the technology, photos of the fallen are also sometimes placed near the memorial. These crosses help give troops closure and a way to pay their respects to their brothers- and sisters-in-arms.

READ NEXT: WWII VET PLAYED SONG FOR SNIPER WHO TRIED TO KILL HIM