What Female Marines Experienced In WWII 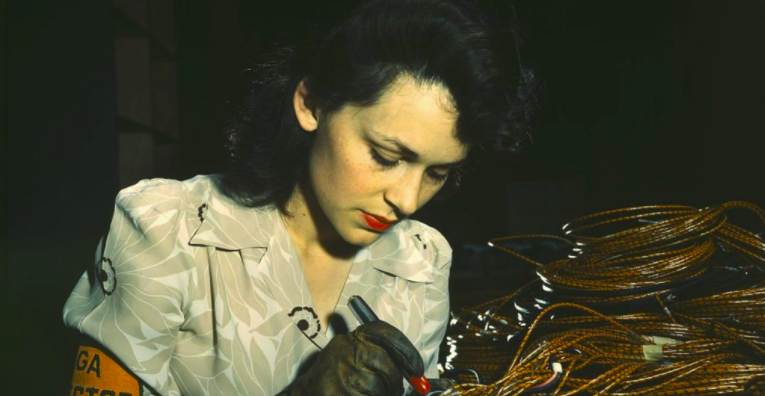 Fresh out of high school, Jessen didn’t find that excitement working as a linotype operator at the local newspaper. So, what does a young woman in search of adventure do when there’s a war going on?

In Jessen’s case, she joined the Marines.

“I was young then, and I wanted the action. There was nothing going on (here). It was too dull at home,” said Jessen, who was Margaret O’Shaugnessy at the time.

Four female pilots leaving their ship at the four engine school at Lockbourne are members of a group of WASPS who have been trained to ferry the B-17 Flying Fortresses. Photo from USAF.

She’d worked for a couple years at the newspaper in Homer, Nebraska, after graduating from Homer High School in 1942. With World War II raging in Europe and in the Pacific Ocean, there were a lot of opportunities to find something more exciting to do. There was the military, and there were jobs available in the many factories that built planes, ships, and other supplies needed for the American war effort.

Jessen considered both before telling her mother that she was joining the Marines.

Also Read: WWII-era female flyers are fighting for military burial honors (and you can help)

“She figured I’d be better off in the Marine Corps.”

Jessen joined the Marines in May 1944 and was sent to Missouri for basic training. Men also were trained at the base, but kept separate from the women. Jessen said the training was physically demanding, and women were allowed to practice on guns but were not allowed to have them. Once she completed basic training, Jessen was sent to Norman, Oklahoma, to learn how to fix Cosair fighter planes.

“They just thought that’s what I was capable of,” Jessen said.

Jessen passed the training and was sent to Marine Corps Air Station El Toro in Santa Ana, California, where she was assigned to work as an office clerk. She never did work on airplanes.

“You know how the government works,” she said. “They train you to do one thing and then have you do another.”

The women who arrived at El Toro weren’t viewed positively by the men they replaced. For many of the men, it meant they were losing their stateside assignments and heading to war.

“The men were mad at us because we came in and took their jobs and they were sent overseas, so we were resented, I’m sure,” Jessen said.

Jessen spent the remainder of the war at El Toro and was discharged in June 1946. Still looking for adventure, Jessen and another female friend hitchhiked across the country to Florida and up the East Coast to New York.

A poster used by the US government to recruit women to the war effort during WWII.

“It drove my mother crazy,” Jessen said with a wry smile and a chuckle.

Eventually, Jessen returned home, where she began dating Alfred Jessen, who had served in the Army in Germany during World War II. They were married in 1947 and raised five sons. Jessen would later work for Iowa Beef Processors in Dakota City for 19 years before retiring in the mid-1970s. Her service in the Marines taught her a valuable lesson for her later work experiences.

“It taught me how to get along with people,” she said. “You don’t judge them. Everybody was the same.”

Over the years, Jessen saw her husband honored for his military service. Few people knew she, too, had served.

“I think my husband was proud of it, too. He realized they didn’t treat us the same,” Jessen said. “When they came around and offered him an award for being in the service, he told them I was in the service, too, but they never offered me an award.”

That slight doesn’t lessen the pride Jessen said she feels about her decision to join the Marines rather than be a welder.

“I’m proud of the fact I served,” she said. “It gave me a lot of experiences.”