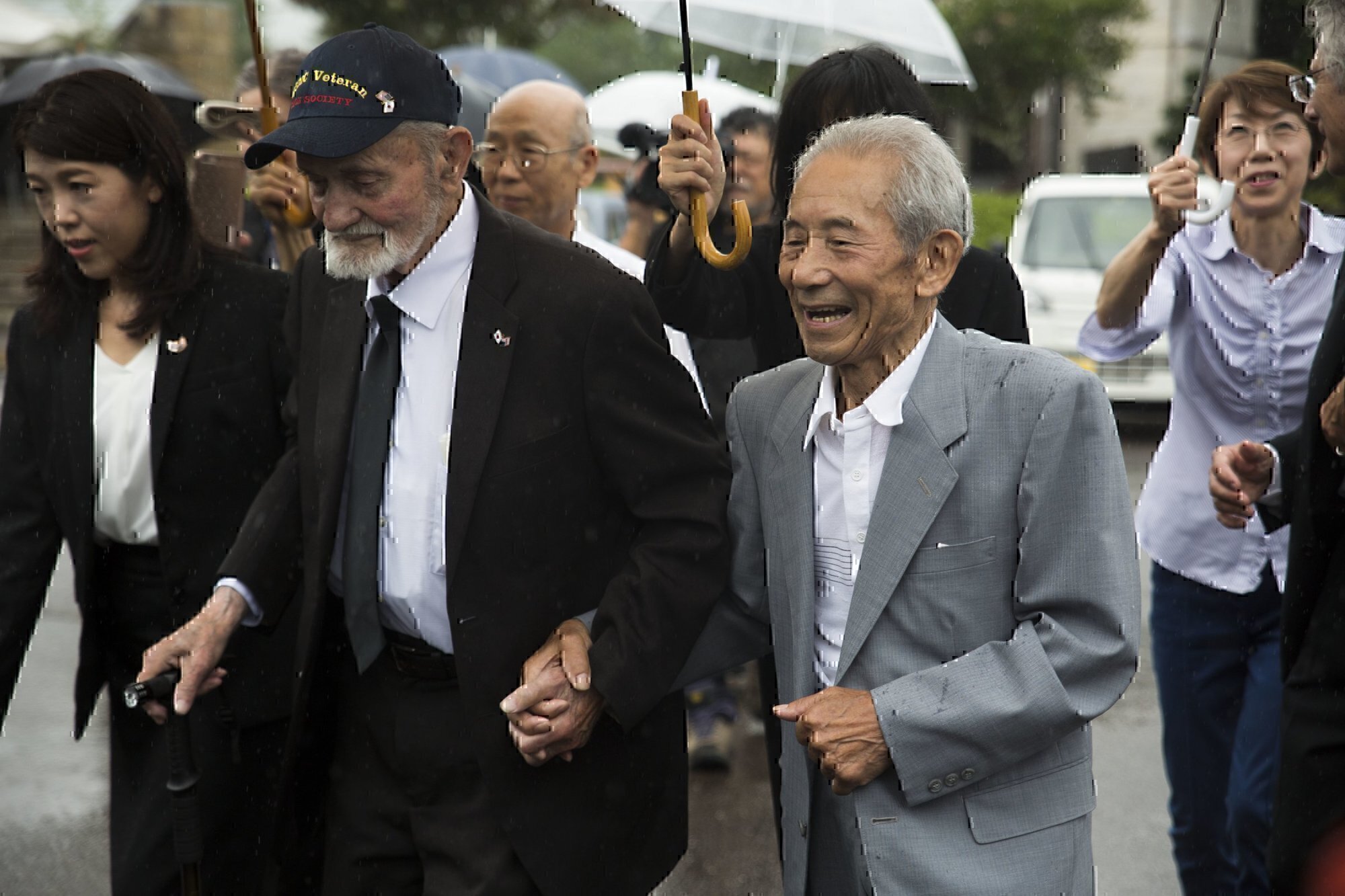 Deep within the mountains of Gifu Prefecture, in a small farming village hidden away from the fast-paced city life, the family of a fallen Japanese soldier eagerly waited for the return of a precious heirloom. For the first time in 73 years, the Yasue family can finally receive closure for the brother that never came home from war.

World War II veteran Marvin Strombo traveled 10,000 miles from his quiet home in Montana to the land of the rising sun to personally return a Japanese flag he had taken from Sadao Yasue during the Battle of Saipan in June 1944.

The U.S. Marine Corps veteran carried the flag with him decades after his time serving as a scout sniper with 6th Marine Regiment, Second Marine Division. He cared for the flag meticulously and never once forgot the promise he made to Yasue as he took the flag from him in the midst of war.

As a young corporal, Strombo looked up from his position on the battlefield, he noticed he became separated from his squad behind enemy lines. As he started heading in the direction of the squad’s rally point, he came across a Japanese soldier that lay motionless on the ground.

“I remember walking up to him,” said Strombo. “He was laying on his back, slightly more turned to one side. There were no visible wounds and it made it look almost as if he was just asleep. I could see the corner of the flag folded up against his heart. As I reached for it, my body didn’t let me grab it at first. I knew it meant a lot to him but I knew if I left it there someone else might come by and take it. The flag could be lost forever. I made myself promise him, that one day, I would give back the flag after the war was over.”

As years went on, Strombo kept true to his promise to one day deliver the heirloom. It was not until the fateful day he acquainted himself with the Obon Society of Astoria, Oregon, that he found a way to Yasue’s family. Through the coordination of the Obon Society, both families received the opportunity to meet face-to-face to bring what remained of Yasue home.

Sadao’s younger brother, Tatsuya Yasue, said his brother was a young man with a future to live. When Sadao was called upon to go to war, his family gave him this flag as a symbol of good fortune to bring him back to them. Getting this flag back means more to them than just receiving an heirloom. It’s like bringing Sadao’s spirit back home.

Tatsuya was accompanied by his elder sister Sayoko Furuta and younger sister Miyako Yasue to formally accept the flag. As Tatsuya spoke about what his brother meant to not only his family but the other members of the community, he reminisced over the last moments he had with him before his departure.

Tatsuya said his family received permission to see Sadao one last time, so they went to him. He came down from his living quarters and sat with them in the grass, just talking. When they were told they had five more minutes, Sadao turned to his family and told them that it seemed like they were sending him to somewhere in the Pacific. He told them he probably wasn’t coming back and to make sure they took good care of their parents. That was the last time Tatsuya ever spoke to his brother. As Strombo and Yasue exchanged this simple piece of cloth from one pair of hands to the next, Strombo said he felt a sense of relief knowing that after all these years, he was able to keep the promise he made on the battlegrounds of Saipan.

The reunion also held more emotional pull as it took place during the Obon holiday, a time where Japanese families travel back to their place of origin to spend time with loved ones.

Although Strombo never fought alongside Yasue, he regarded him almost as a brother. They were both young men fighting a war far from home. He felt an obligation to see his brother make it home, back to his family, as he had made it back to his own. Strombo stayed true to his word and honored the genuine Marine spirit to never leave a man behind.