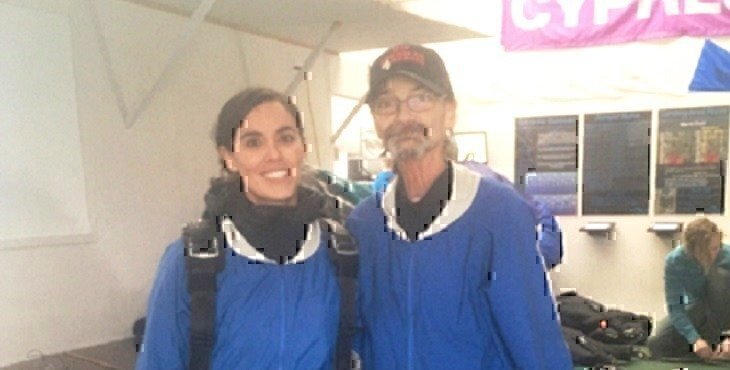 Army Veteran Kenneth Augustus loved adventure.  He loved to rock climb, and scuba dive, and always had a longing for falling hundreds of feet per second from an airplane.

“I got a call out of the blue to come work with this Veteran,” Lili said.  “I was told he only had a few months to live but when I got there he was beyond positive, and so easy to work with.  He had made peace with what was happening to him and was really preparing himself for the inevitable; he just had some things he wanted to experience first.”

Lili made several calls and finally arranged the jump through two very generous community partners: Skydive Utah and the Elks Lodge.  It was go time!

“He got to jump with his brother and his son, and they wanted me to do it with them!  We had a group hug and were all fist-pumping in the plane prior to the jump.  It really was an extraordinary experience.”

On Veterans Day 2017 Kenny Augustus fulfilled his dying wish. Attached to a highly-experienced instructor and with a big smile on his face, he dove out of a prop plane at 13,500 feet.  Imagine a free fall at 120 miles per hour for 60 seconds.  Moments later, the jolt of a chute opening was followed by a peaceful glide to the ground.  Lili remembers Kenny’s smile and a big thumbs-up.

From one Extreme to the Next: Scuba Diving One Last Time (check)

Later that evening, Kenny went scuba diving with his son via virtual reality goggles at the Crater in Midvale, Utah. He was too sick to go in the water, but enjoyed the next best thing.  Using a drone especially equipped for the water, Kenny followed his son underwater and experienced everything his son was seeing.   Kenny was hoping for the real thing, but just being there surrounded by the love and support of his family was thrill enough.

“I went to my supervisor and I just broke down” Lili said.  “I am touched and hurt all at the same time. I really got to know him and his family over a short time. I just never thought it would hurt this much.”

Lili agreed to tell this story because of this extraordinary Veteran she came to admire. His spirit and positivity in the face of such pain and uncertainty impacted her in ways she never imagined.

READ NEXT: 6 REASONS WHY CIVILIANS BACK OUT OF MILITARY SERVICE