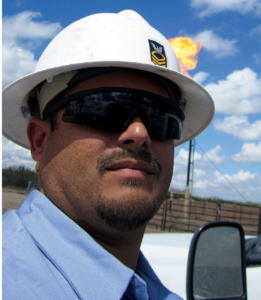 Transition Recipe: Take a full measure of Navy training, mix in 20 years of experience as a mechanic and leader, and add a dash of luck. That formula worked for Carlos M. Cisneros, 41 who retired from the Navy in 2013 and transitioned smoothly into a career as a service manager with United Rentals.

Room to Grow: Like in the Navy, he trains and mentors his crew. And the best thing? There’s lots of room to advance. “It offers the opportunity to learn, grow and move up within the ranks with unlimited potential for advancement,” he says.

Getting Out: Cisneros grew up in Miami, but wanted a change. He didn’t have money for college, so he enlisted. During his 20 years active duty, he served on guided-missile frigates, a mines countermeasures ship and security patrol boats-among others. They all had one thing in common: training and mentoring young sailors. “Most of the time it seemed like babysitting, but in reality it was developing the future of the Navy,” he says.

Getting Lucky: Cisneros was proud to make chief petty officer, but after 20 years he was ready to begin a civilian career. He sent resumes to any job he qualified for;no luck. So he changed his tactic. “In all honesty, I was lucky. I contacted a recruiting firm and shortly thereafter was notified of an opportunity to move to an area where family wanted to go.”

Same Core Skills: Today he manages the maintenance and repairs of diesel generators and HVAC units. He still trains personnel and helps them grow in their careers. Some things never change.

Great Advice: The best advice he got was from his wife: Be persistent and don’t give up. There is always an open door somewhere, don’t quit if it gets hard. His best advice for you? “Don’t wait until the last minute to try to figure out what you want to do,” he says.