How the Titanic Was Discovered on a Navy Operation 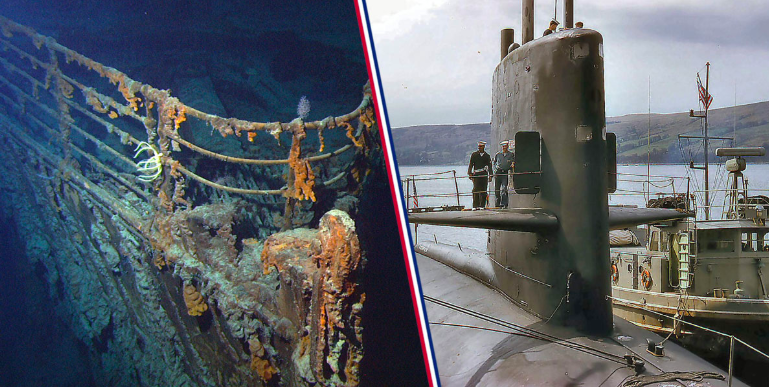 The RMS Titanic was billed as “unsinkable.” Many conflicting reasons have been proposed as to why but, nonetheless, they were proven wrong. When the RMS Titanic sank to the bottom of the North Atlantic Ocean, she took with her over 1,500 of her 2,224 estimated passengers and crew.

Countless expeditions were sent to go salvage the wreckage, but it wasn’t until 1985 when it was “suddenly” located. For many years, there was a shroud of mystery surrounding exactly how it was found. The truth was later declassified by the Department of the Navy. As it turns out, finding the Titanic was a complete accident on the part of U.S. Navy Commander Robert Ballard, who was searching for the wreckage of two Navy nuclear submarines.

Ballard had served as an intelligence officer in the Army Reserves before commissioning into the active duty Navy two years later. While there, he served as a liaison between the Office of Naval Research and the Woods Hole Oceanographic Institution.

He spent many years of his life dedicated to the field of oceanography. Even before enlisting, he had been working on his own submersible, called Alvin, with the Woods Hole Institute. He’d continue designing submersibles and technologies until he finished his famous craft, the Argo. The Argo was equipped with high-tech sonar and cameras and had a detachable robot called Jason.

It was then that the U.S. Navy secretly got in touch with Ballard about finding the USS Thresher and the USS Scorpion in 1982. Both nuclear submarines had mysteriously sank at some point in the 1960s, but the U.S. government was never clear on what exactly happened.

A simple task, but it was far from what Robert Ballard wanted to do.

The approximate locations of the submarines were known, but exactly how well the nuclear reactors were holding up after 20 years on the ocean’s floor was a mystery. They sent Ballard and his team to go find out. To cover their tracks, they said they were embarking on a regular expedition to search for the lost Titanic (which, despite the outcome, wasn’t the objective at the time).

The mission was to take four one-month-long expeditions — two months per lost submarine. Ballard asked if he’d ever get the chance to look for the Titanic while he was out there, a chance to fulfill his childhood dream. The Navy struck a bargain. They said that he could look for the sunken behemoth after he found the two subs, if time and funding permitted.

Of course, discovering the Titanic was an historic moment, but the Scorpion and the Thresher could be leaking nuclear radiation…

He received his funding and set off with the French research ship Le Suroit. Ballard kept most of the crew in the dark, opting instead to stick with his cover story of searching for the Titanic. He’d personally go down in a submersible and check on the status of each nuclear reactor and their warheads. He had a rough idea where to look, but he followed debris trails on the relatively smooth ocean floor to get to each destination.

Once he finished checking on the USS Scorpion and USS Thresher, he had twelve days remaining. Between the two wrecks was a large debris field that littered the ocean floor. This was far from where many experts claimed the Titanic would be.

Just like the two submarines, Ballard believed that the Titanic imploded, leaving behind a massive trail of debris as it drifted to its final resting place. He used what he learned from the submarines and applied the same theory to the Titanic.

First he found the ship’s boiler, and then, eventually, the entirety of the hull.

His theory about the ship splitting in two was also proven.

He knew that his remaining time was short and a storm was quickly approaching, so he marked his exact location on the map and returned to the wreckage the following year. For a year, he didn’t tell a soul, for fear of others showing up and trying to remove artifacts from the ship. He eventually returned on July 12th, 1986, and made the first detailed study of the wreckage.

Ballard would later investigate the wreckages of the Bismarck, the RMS Lusitania, the USS Yorktown, John F. Kennedy’s PT-109, and many more. The story of the Titanic, of course, would later be turned into a film that won 11 Academy Awards — which conveniently left out the fact that the ship’s wreckage was actually discovered due to a top-secret government operation.

Article Name
How the Titanic Was Accidentally Discovered on a Navy Op
Description
U.S. Navy commander Robert Ballard was contacted to discover to the remains of two submarines, but he also had plans to find the Titanic. Ballard ended up discovering the wreckage of the Titanic during the Navy operation.
Author
Eric Milzarski
Publisher Name
We Are The Mighty