5 Things We Wish We Had On Deployment 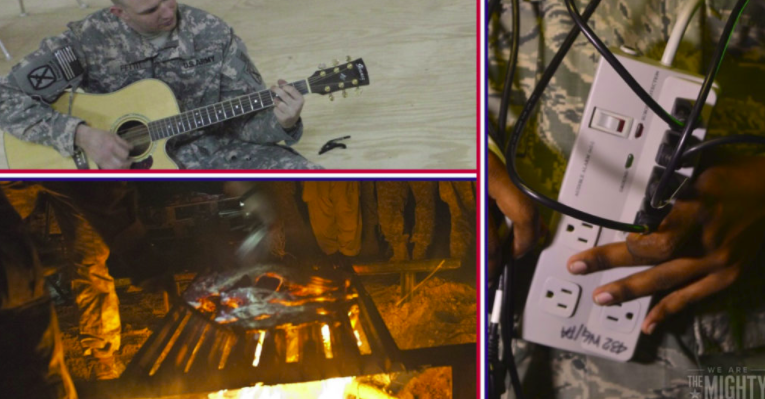 Every little gift sent out through a care package — or just bought on Amazon — helps troops deployed. While troops are eternally grateful to the families, schools, and churches that send USPS flat-rate boxes stuffed with goodies, there’re some awesome, quality-of-life things that troops wish they could get, but logistically can’t.

These are some things we wish we had after being sent to the deserts of the Middle East.

Yes. Mothers can whip up a mean batch of cookies that can survive the weeks of shipping it takes to get to our fighting men and women. And yes, military cooks (usually) whip up some mean chow for the troops (if they have access to a dinning hall).

But it’s the other meals — the ones mama makes that cooks can’t mass-produce — that troops wish for.

Sure, the cooks are good, but are they “honey glazed ham, made with mama’s love” good? (Image via Wikimedia Commons)

It’s funny how the little things get taken for granted while deployed. Sure, troops could conceivably set up a nice lounge for themselves with all the useless junk they ordered off Amazon or stashed in their pre-deployment box, but the thing is, how are you going to power all your cool stuff?

Before you even think about it: No. Daisy chaining power strips and extension cords for more outlets won’t work. Too much power coming from one tiny cable will cause a fire — and fire is bad.

Ever see a troop come home and just want to enjoy being alone for more than a bathroom break? Deployments are cramped. Living spaces are tight. Everywhere you go, you need your “battle buddies.”

It’s fine at first, but you quickly realize there’s only so much small talk you can make with the same 12 people for 12 months.

Oh, and it also smells like sweat, ass, and feet. No one ever thinks about sending air fresheners. (U.S. Marine Corps Photo by Sgt. Scott Whittington)

Today’s society is spoiled. Now, you can get in contact with anyone in the world using just the tiny device in your pocket. Too bad there isn’t any cell phone reception in Trashcanistan.

If you want to talk to friends and family back home, you have to wait until you can go to the USO tent, wait until you can get an open spot at a computer, and then, if you’re lucky enough to get some time, you have to deal with internet on par with 1995 dial-up. And your time is limited, so you can send basically just a, “Hi, mom. I miss your food. Tell everyone I love them.”

In the USO’s defense, they are getting better and better… (Photo by Sgt. Shawn Coolman)

War is loud. War never stops. Especially when you’re trying to sleep. Troops tell themselves that they’ve gotten used to sleeping with the generator running and pilots flying at all hours of the night, but it’s just a lie.

Plus the cots or bargain-bin mattresses that have been recycled time and time again since the start of the war aren’t any help.

But hey! Just another drop in the bucket for all of the back pain of veterans go through. (U.S. Army Photo by Staff Sgt. Jason Bailey)

Why lift with your lower enlisted when you could use one of these bad boys? Check roger. Filling sandbags is just something troops do while deployed — sometimes as a punishment.

But seriously? A soldier can dream, right?

READ NEXT: THIS IS WHY SOME SAILOR WEAR GOLD STRIPES, AND SOME WEAR RED