The Charge That Influenced The Trooper By Iron Maiden 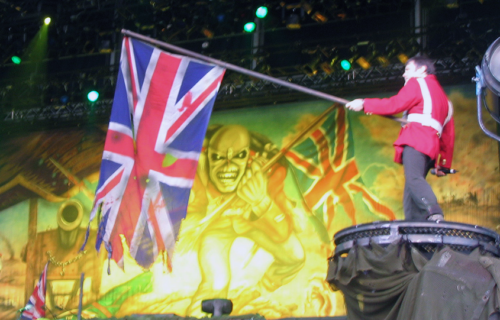 “Forward, the Light Brigade! ‘Charge for the guns!’ he said: Into the valley of Death. Rode the six hundred.”

This was part of Lord Alfred Tennyson’s poem about how much of a cluster f*** the Battle of Balaclava truly ended up being. It is also the subject of Iron Maiden’s “The Trooper.”

The song directly states, “And as I lay forgotten and alone. Without a tear I draw my parting groan,” as a tribute to unnamed troops who were killed that day. In the many years that have since passed, letters have been discovered of first hand testimony of the ill-fated battle.

From 1853-1856, French, British, and Ottoman forces fought against the Russian Empire in the Crimean War. Conflict began after the Russians occupied Ottoman territory in modern day Romania. Within this war, the most infamous battle was at Balaclava where “The Charge of the Light Brigade” took place.

Under the command of Maj. General James Brudenell, 7th Earl of Cardigan, the light cavalry brigade consisted of roughly 670 men. Lord Raglan, the Commander of the British forces, intended to prevent Russian troops from maintaining their guns on Ottoman positions.

There are many historical discrepancies on who ordered the actual charge, but the fact remains: the cavalrymen charged directly into enemy cannons, killing roughly a sixth of brigade and another sixth wounded, totaling 271 casualties.

It was later discovered that the Russians numbered 5,240 strong.

Officer of the 17th Lancers (Painting via Cranston Fine Arts)

An unknown officer of the 17th Lancers wrote in a recently discovered letter, “We all knew the thing was desperate before we started, and it was even worse than we thought. However there was no hesitation, down our fellows went at a gallop — through a fire in front and on both flanks, which emptied our saddles and knocked over our horses by scores. I do not think that one man flinched in the whole Brigade — though every one allows that so hot a fire was hardly ever seen.”

The loyalty of the British cavalry became well respected. The London Gazette wrote of the charge weeks after. While the commanders became despised, the troops were revered for their courage in the face of certain death.

Private Pearson of the 4th Light Dragoons wrote to his parents, “I shall never forget the 25th of October — shells, bullets, cannonballs, and swords kept flying around us. Dear Mother, every time I think of my poor comrades it makes my blood run cold, to think how we had to gallop over the poor wounded fellows lying on the field of battle, with anxious looks for assistance — what a sickening scene!”

(Photo by Roger Fenton via Wikimedia)

Roger Fenton is regarded as one of the first war photographers and was present at the charge. Fenton refused to photograph dead or wounded as to not upset Victorian Era sensibilities, but he did capture troops and many moments after.

This photo that J. Paul Getty Museum called “one of the most well-known images of war” shows the aftermath of cannonballs that littered the landscape. The photograph titled “Valley of the Shadow of Death” has been on exhibition with the over 300 other images of the Crimean War

(Photo by Roger Fenton via Library of Congress)

Today, the Light Brigade is remembered in the song “The Trooper.” Bruce Dickinson frequently on tour wears the British “red coat” smock as he waves a war-torn Union Jack. There has never been a more appropriate time to form a wall of death in the mosh pit.

This story originally appeared on WeAreTheMighty.com

READ NEXT: WWI Fighter Inspired “One” By Metallica