WWI Fighter Inspired “One” by Metallica 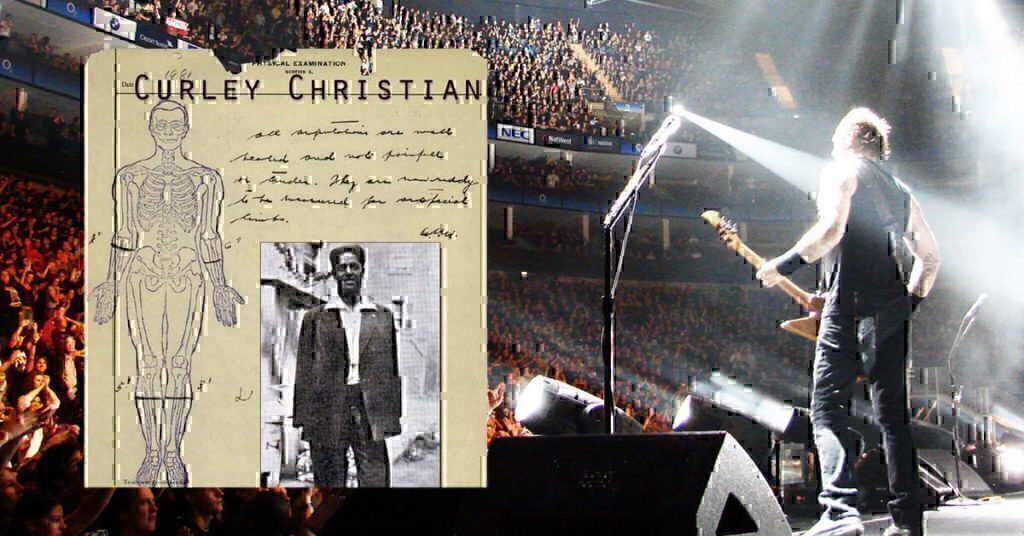 Ethelbert “Curley” Christian was the first and only surviving Canadian quadruple amputee of the First World War.

Born in Pennsylvania, Christian settled in Manitoba before enlisting in the Canadian Armed Forces almost a year and a half before U.S. involvement. It was in the Canada’s most celebrated victory at Vimy Ridge that Christian sustained his injuries, resulting in the loss of all four of his limbs.

Prince Edward VIII (who would later become King Edward VIII) visited Christian at the Toronto hospital and wrote about him in what would become a long string of inspiration that became Metallica’s One.

Image via Sharon Williams and the Military Museums of Calgary

Metallica is one of the most beloved bands by U.S. troops and they have fully embraced the troops in return. They have invited veterans and their families on stage and they’ve also been “honored” by the use of their music in Guantanamo Bay.

But it’s in their music that they show their support for the troops, using the “plight of the warrior” as a reoccurring theme. None of their songs (or their music videos) capture this more than 1988’s One.

The song takes inspiration from the novel “Johnny Got His Gun” written by Dalton Trumbo. The music video uses many clips from the same 1971 film, which was also written and directed by the novel’s author, Trumbo.

(MetallicaTV | Youtube)
“Johnny Got His Gun” is about a World War I soldier, Joe “Johnny” Bonham, who suffers severe injuries. After losing all four limbs and most of his senses in combat, Johnny reflects on his life, as memories are all he has left.  The film and novel are remembered for the ending where, after many years of insanity of being trapped, Johnny wishes only for death.

Having read Prince Edward VIII’s letter, Trumbo used the story as the inspiration for what would be his best selling novel.

Johnny may have been a fictional character, but Curley was the real soldier. And very much unlike Johnny, Curley loved life despite all that was thrown at him.

(Article via The Winnipeg Evening Tribute)

Ethelbert “Curley” Christian never lost any of his senses, unlike his fictional counterpart, and remained in high spirits through out his life.

His cheer was noticed by the then Prince of Wales, who wrote about the joyous veteran. Christian fell in love with his caretaker, a Jamaican volunteer aide named Clep MacPherson. The two would marry shortly after. Their love — and her nursing skills — would spark the Canadian Veterans Affairs to enact the Chapter 5 – Attendance Allowance, one of the first in its kind.

Years later, Christian would meet King Edward VII at the dedication to the Canadian National Vimy Memorial. He described to the Toronto Star their second encounter: “Just as he was passing he paused and pointed to me, saying, ‘Hello, I remember you. I met you in Toronto 18 years ago,’ as he broke through the double line of guards.”

After many years of a happy marriage and raising a son, Douglas Christian, Curley Christian passed away on the 15th of March, 1954. His legacy still carries on through both his advancement of Canadian Veterans Affairs and being the true inspiration for one of the most iconic power ballads.

Rock on, Curley. Rock on.

This article originally appeared on WeAreTheMighty.com.