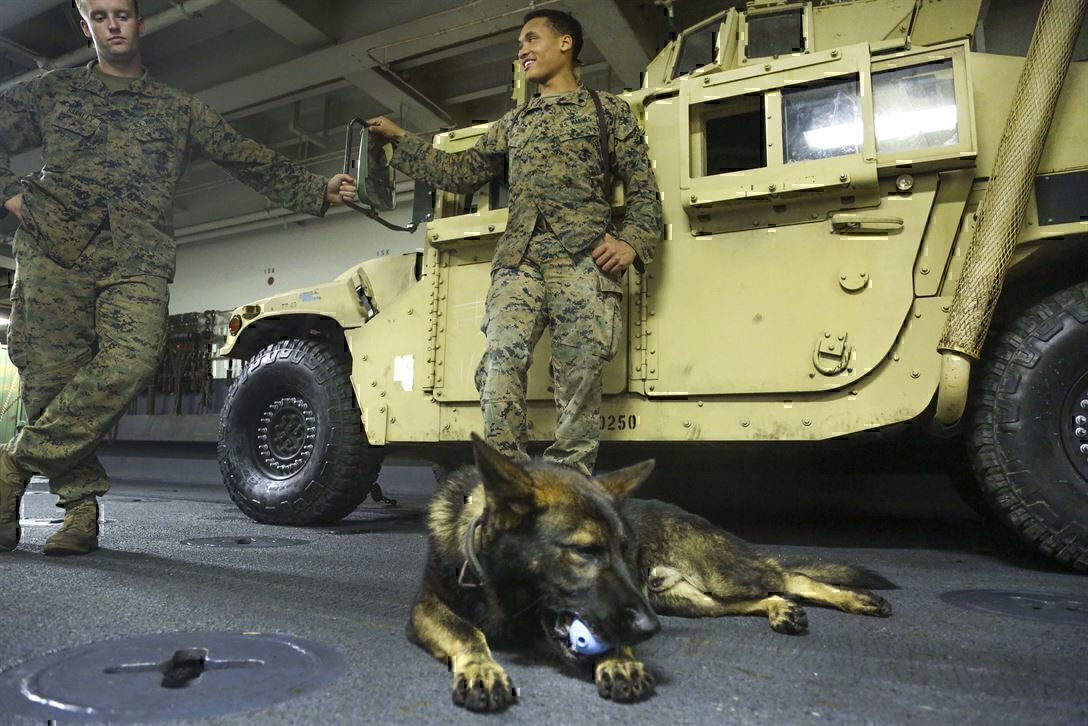 After about ten to twelve years, it’s usually time for a military working dog (MWD) to retire.

Unlike us, they don’t get out and start celebrating life immediately. Hundreds of them are sent to Lackland Air Force Base near San Antonio, Texas every year. Before November 2000, most of the dogs were euthanized or just left in the battlefield troops just left (because despite the rank and funeral honors, they’re listed as equipment).

Five puppies cloned from Trakr, a German shepherd, who made headlines by rescuing victims from the World Trade Center following the 9/11 terrorist attacks, mug for cameras. (Yonhap News photo)

When a dog is retired out, it is usually because of injury or sickness and the best person to care for the puppy is the handler. More than 90% of these good dogs get adopted by their handler. Makes sense — calling a military working dog your “battle buddy” seems less awkward when the context is with a Labrador Retriever.

Next on the order of precedent in MWD adoption is law enforcement. Their services would be invaluable within police forces because they are trained to do exactly when the police would need them to do. However, the dogs are contractually agreed to belong to the department. They are the only ones allowed to allow the dogs to perform patrol, security, or substance detection work and the DoD has strict restrictions otherwise.

Sadly, even the police force won’t take the rest of the military working dogs because of their age or injury. This is where civilians come in. Bare in mind, adoption isn’t a quick process and applicants are carefully screened. It may take about a year on the waiting list to get your first interview.

They are not some goofy pug you can just adopt and take home. These dogs have usually deployed and show the same symptoms of Post Traumatic Stress. These dogs were trained to sniff out roadside bombs and to fight the Taliban and now have trouble socializing with other dogs and aren’t as playful as they were before.

The MWD selection process demands that the most energetic and playful puppies are needed for combat. After years of fighting, these old dogs show signs of nervous exhaustion and distress. If that pulls at your heart strings because it hits close to home, it is scientifically proven that dogs (including these MWDs) can aid and benefit those with Post Traumatic Stress.

If you don’t mind the wait, have an appropriate living space for a large dog, and are willing to aid these four legged veterans, there are organizations that can help. Save-A-Vet and Mission K9 Rescue are great places to start.