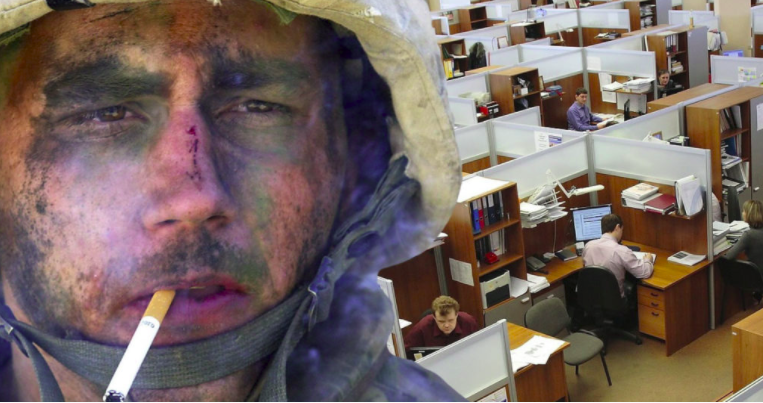 When you’re in the military, every bit of civilian life is broken out of you. When a veteran returns to civilian life, there are plenty of habits that get dropped like a bag of bricks. Slowly, we learn to sleep in a bit more and not get upset if someone in our new office has a bit of stubble. Some habits, however, aren’t turned off because of how much of an edge it gives us over civilians.

Respect is a two-way street. Start a conversation with someone with respect and they’ll look at you better for it.

7. Scheduling and being 15 minutes early

Every hour of every day is planned. Routes are checked well beforehand to see how long it’ll take to get somewhere and departure times are planned accordingly. Even with the planning, veterans still make it there before the given time, just in case.

Admittedly, it’s a pain when nobody else gets it and we have to find something to occupy our time while we wait.

Eh. We’ll find something else to do. (Image via GIPHY)

6. Preplanning every detail (with backups)

When veterans arrive, we have a game plan — with an alternate plan, and a contingency plan, and an emergency plan…

In that one-in-a-hundred time where we don’t have a plan, our “winging it” skills are on point.

While we all need food to survive, it just takes too much damn time to consume it. Veterans cut the fat and use that extra fifteen minutes each meal to wait in front of wherever we’re going next.

This doesn’t stop when a veteran gets out of service. Take speed eating and eliminate the need to stay fit and you quickly get an idea why some vets get fat.

Every vet during their first week at Fort Couch. (Image via GIPHY)

We drive recklessly and safe at the same time. We’ll swerve in and out of traffic like it’s nothing and yet our driving records are spotless.

Some people might view this as us “driving like assholes.” We call it “I didn’t like that cardboard box / White Toyota Helix on the side of the road.”

That’s basically the reason why we always drive in the middle of the road. (Image via GIPHY)

3. Not complaining about weather

Ever hear a veteran complain that it’s too cold, too hot, too wet, or too snowy? Hell no.

Whatever the weather, at least we’re not enduring it in the field.

PCSing to nearly every base on the planet does that to you. (Image via GIPHY)

The English language is fascinating. While most civilians make up some onomatopoeia and call it a “thingy,” troops and veterans will usually default to whatever we called it in the service.

A bathroom is a “latrine” or “head” because you’re not going in there to bathe. If something is “ate-up” or a “charlie foxtrot,” we can point out how much of a clusterf*ck something is without letting everyone know someone’s a dumbsh*t.

Vet-specific terms are mostly insults though, which leads us to… (Image via GIPHY)

1. Pointing out peoples’ flaws in a polite and effective manner

In the military, troops need to be able to tell the person who outranks them by a mile that something’s wrong.

Troops can tell a General — in a polite way — that their boot is untied. Troops can also tell a Private that they’re a friggin’ idiot for showing up to PT formation only 9 minutes early.

We’re quick to point out the flaws. (Image via GIPHY)

Many vets still work out. The rest either embrace Fort Couch or lie about it — but we know the truth.

No one’s judging. (Image via GIPHY)

READ NEXT: THIS IS WHY SOME SAILORS WEAR GOLD STRIPES, AND SOME WEAR RED