This Navy Veteran Was Also a Women’s Rights Pioneer 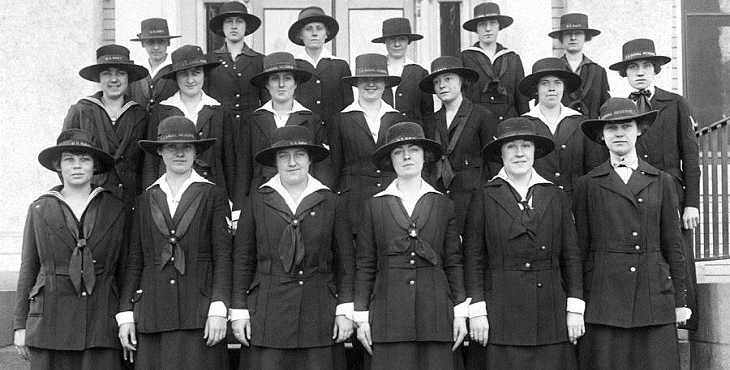 Mary Sutherland was a pioneer in the movement for the equality of women in America.  As a Navy Veteran of World War I, she was one of the earliest women allowed to enlist in the Navy.  Her service, along with the thousands of other women who enlisted in the Navy during World War I, changed the way that many Americans perceived women in society.

When the United States entered World War I in 1917, the Navy quickly learned that it was not staffed with the amount of personnel that the war demanded.  In order to solve this shortage, the Navy opened up recruitment to women.  It was the only military branch to do so during the war.

Many women saw this as an opportunity to not only serve their country, but to prove to society that they were capable of doing so in equal capacity to men.  Thousands of women quickly enlisted in the Navy.  In September 1918, 22-year-old Sutherland enlisted as a Yeoman (Female) 1st Class.

The eagerness of these women to serve caught the Navy by surprise, and revolutionized its recruitment.  The amount of women who enlisted solved the Navy’s initial concerns of personnel shortage, but the unanticipated number of women recruits created separate issues that the Navy needed to address.

The Navy needed an increase of female nurses to perform medical examinations for the new women recruits.  It needed to design and issue new uniforms for women.  It had to build, assign, and manage separate living quarters.  As more and more women enlisted, they created the need for additional support.  Women also filled many of these support roles.

Through the course of the war women served in the Navy in a variety of different occupations.  They worked as everything from secretaries and phone operators, to mechanics and munition makers.

By 1920, two years after the end of the war, the Navy had discharged most of its Female Yeomen.  However, women’s contributions to the war and the home front were recognized.  That same year, the Nineteenth Amendment was ratified and gave women the right to vote.  The long battle for women’s suffrage had finally ended, in part because of the efforts of women during World War I.  When Sutherland completed her military service, she had the right to vote for the first time.

Sutherland took pride in her service.  She continued to serve within the Veteran community long after her military service.  In the 1980s, she was an active member of both the Disabled American Veterans and the American Legion.

On September 28, 1988, Sutherland passed away at the age of 92.  She is buried in Florida National Cemetery.

This article was written by Kenneth Holliday for VAntage Point.

READ NEXT: 5 THINGS YOU DIDN’T KNOW ABOUT THE FIRST FEMALE MARINES