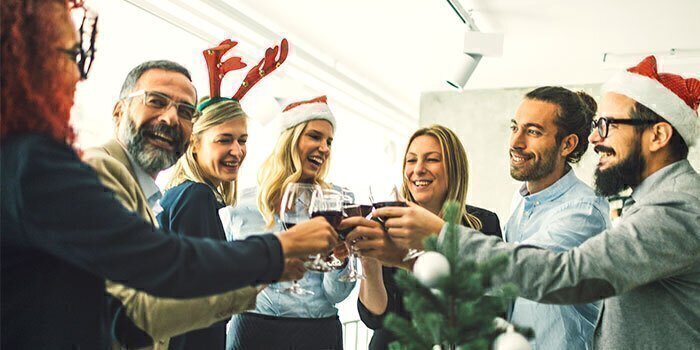 One tradition the military shares with civilian companies is the holiday party. Both a nod to various religious holidays and an end-of-the-year celebration, the holiday party is “mandatory fun” in civilian organizations as well as military.

But much more so than in the military, a civilian holiday party presents lots of opportunities to make a good impression with the immediate supervisors who write performance reviews, as well as the higher-ups who make promotion decisions. And if they like you, they’ll push you forward. So here’s how to get the most career boost out of a holiday party.

Don’t do anything crazy. In the military, holiday parties are (to a certain extent) a chance for everyone to relax and have fun together, often with alcohol. The military can get away with this because the organizational structure is very clear: you can joke and drink with your commanding officer, or your platoon sergeant, but you know that your relationship with them will be no different come the following Monday. If anything, getting a bit intoxicated at your military holiday mandatory fun events is expected and encouraged, as long as you don’t become aggressive, start fights, or break things (or get a DUI).

In the civilian world, however, the organizational structure and behavior expectations are murky. Supervisors and higher bosses will be friendly, and they probably want you (and everyone else) to reciprocate. What you probably won’t know, however, is where “the line” is for them – and you certainly don’t want to cross it and get on their bad side. It’s the same with alcohol: if it’s provided, you can drink it and make merry – but you don’t want the higher-ups to remember you as “the drunk one.” The best course of action is to participate in the party, but make sure you stay sober enough to remain in control.

Leave a good impression on everyone. Military performance reviews are based on very objective criteria like shooting, PT scores, and technical qualifications – which means that if you’re good at your job, you will be recognized for it. In the civilian world, however, it isn’t always as clear. You may be placed in a work cell or on a project team – which means that to the boss (or the boss of YOUR boss) you may seem interchangeable with your teammates, and you’ll likely get the same evaluation. What does this have to do with the holiday party? It’s an opportunity to stand out as something more than just a member of team X or project Y. If the higher-ups remember you positively as polite, engaging, and (perhaps) as a veteran, they are going to react more positively when they see your performance review. If it helps, look at the holiday party not so much as a “party” but as a promotion interview.

Your old habits of military courtesy will serve you well. Be friendly but respectful to everyone, greet your teammates and supervisors in a friendly way, and make sure to introduce yourself to any bosses you haven’t met. You can even tactfully remind them about your history: “This is my first job after the Marine Corps, and I’m really excited for the opportunity!” Have some polite questions ready if you need them – kids, holiday plans, favorite sports teams, or non-controversial current news stories are good places to start. In a conversation, listen more than you talk. People respond more positively toward those who are interested in them, and negatively when they feel used (as when someone else preaches at them or bothers them with personal matters).

A good trick to keep conversation going is to respond with amplifying information: “You know, something else I heard about that was…” Avoid sucking up, and recognize when it’s time to leave the conversation: If you’re talking to someone and their eyes shift to other conversations, or they suddenly make little half-turns away, then simply wish them a happy holiday and excuse yourself. Even if they were getting annoyed, they’ll still feel subconscious gratitude that you responded to their social cues.

Overdress. Whatever your personal feelings are on dressing nicely, holiday parties have a distinctly formal vibe. If you’re trying to look “cool,” you’re probably more concerned about what your peers think – understandable, given that you may be still trying to “fit in” and prove yourself part of the team. But if you want to stand out to the higher-ups, the easiest way is to dress nicely. Additionally, the people who put on the party (management) will appreciate you making the effort, certainly, and they’ll remember you for that.

Keep in mind we’re not talking a tuxedo or a suit, either. Generally you can’t go wrong with dressy slacks and a collared dress shirt, perhaps with a sweater or a jacket, with tie optional. Females can mimic this with a skirt or nice slacks paired with a dressy shirt and maybe a sweater (a dress is a bit more formal). That’s considered “business casual” if there’s a dress code for the party – “semi-formal” means a suit and tie; “formal” means a tuxedo. The one exception to this rule is when the holiday party occurs at work during the work day. Then you should just wear whatever you normally wear to work (but maybe a little dressier).

READ NOW: What The Heck Is Business Casual!?

Be helpful. Company parties almost always need volunteers to help set up and clean up. In the military, you could always hope you weren’t on the working party, but in a civilian company this is a chance to meet people from other parts of the company, including the managers who are in charge of the holiday party. This is advantageous, because it shows that you are committed and eager to help, and that you are reliable. This also puts you in the position of receiving thanks from the partygoers, which makes them feel unconsciously that they “owe you.” Where all this is an advantage is during personnel meetings, when supervisors and managers decide who’s getting promoted (or laid off). They won’t explicitly make the holiday party an evaluation bullet, but remembering that you were positive, helpful, and that they felt grateful may make all the other evaluations bullets more positive. As for layoffs? It’s hard to lay off the guy (or girl) who put on the holiday party.

Know when to leave. This rule applies in many ways. First, don’t leave too early. Being among the first to bail sends the message that you don’t care about company events, or that you have better things to do, or that you just don’t like the people there. It also may upset the higher-ups who planned the holiday party, and certainly will rob you of the chance to develop relationships and look good.

Try to enjoy yourself – it’s the easiest way to be friendly and positive (as long as you don’t do anything stupid). But suck it up if you have to so that you look happy and are social, then when the party is winding down just exit gracefully. Maybe nobody will be talking about you next Monday, or remembering your antics, but your peers and bosses may think a little better of you for your good behavior at the holiday party, and that may be all you need to stand out – and to get a better evaluation (and a subsequent raise and/or promotion) next time around.

READ NEXT: Things You Didn’t Know About Working Overtime