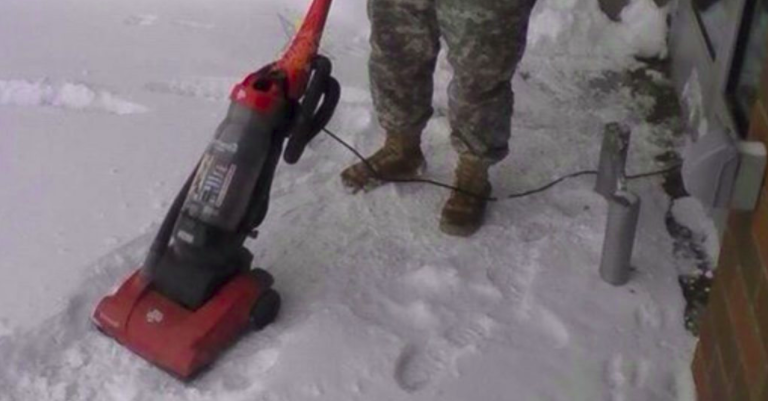 Whenever a military film comes on and the fictional non-commissioned officer gets heated, it’s always the same routine. “Drop and give me twenty.”

The truth is, that exact phrase isn’t actually used much in the military. Not because push-ups aren’t a thing in the military — they are — but NCOs tend to have more unique and clever punishments in mind — especially if you’ve really pissed them off.

Here are a few examples of “character development” that have been used on us:

The pain of one Joe who messed up royally can sting far after they ETS.

In front of some company, battalion, or brigade headquarters are a bunch of rocks. Each is painted with a color on one side, and another color on the other. Whoever gets the unfortunate task of painting the rocks gives future disobedient soldiers a lighter punishment: to flip the rocks from one color to the other. The next guy who acts up flips ’em back.

Sound boring and tedious? That’s because it is.

We don’t have all day! Flip that rock!

#2. Mop the rain off the motorpool.

The idea behind creative corrective actions is to be give them a nearly impossible task to emphasize how badly they screwed up with a dash of hilarity to maximize the point.

Both can be achieved by making their dumb ass mop up the rain or sweep the grass.

#3. Carry around an oversized version of what they lost.

Whenever you see some poor schmuck toting a giant pice of cardboard drawn to look like a CAC, you know they left their ID card one day.

If they lose their weapon, make them carry a stupidly large cardboard “rifle” that they must refer to as their “wife-le”. They lost track of time? Give them one of Flava Flav’s old clocks. The sky is the limit!

#4. Carry around a potted plant ‘to replace the oxygen they’re wasting.’

Do you have one of those “just can’t get anything right” soldiers? Are they a waste of space and oxygen?

Make them replace all of that beautiful oxygen they’re hogging with their very own plant to put something back in the air.

#5. Making the troop on a ‘dead-man’s profile’ blink in cadence.

There’s always that one cocky junior guy that is quick to pull out the “Nuh-uh Sergent! You can’t make me do sh*t!”

Get ’em. Anything done a thousand times in cadence can become a living hell.

#6. Fill sandbags with nothing but a white towel that you expect to come back clean.

This one always catches the smart asses if you leave them unsupervised. Take the typical deployment punishment to the next level by giving them only a white towel to clean off the sandbags when they finish. The bags must stay at one point and the dirt is a yard or so away.

A good Joe will fill the sandbags by hand and save the towel for the end and leave just trace amount of dirt on them. The smart ass will get lazy and use the towel to carry more sand into the bag and try to finish earlier. If they towel is dirty or if the task is done too soon. You caught them.

Filling sandbags has been a time honored tradition going back since Joes started screwing up. (Image via FirstWorldWar)

An oldie, but a goodie.

There’s a perfectly good sidewalk to use. There’s no need to step on the Sgt. Major’s grass. Give them the most useless tool at AAFES to do the most tedious task for the most amount of time.

The grass will grow back to what it was by the time they finish the field.

This guy got his grass sent in mail to have it on deployment. Step on his and you’re screwed. (Image via Rallypoint)

#8. Greeting of the day is repeating whatever they screwed up on to everyone.

Make them the example to remind others not to follow.

“Good morning, Sergeant. Be sure not to leave your helmet at the range!” over and over again should hopefully embarrass them enough to never do that again.

Extra points if it’s for a dirty barracks room and you have them use their dirty socks as sock puppets. “Good afternoon, specialist… Be sure to clean your barracks room…”

Extra Extra points if they do it to a General officer. (Image via Defense.gov)

#9. Take away their birthday.

Hands down the most diabolical disciplinary action comes from Redditor Forewarned-Forearmed in a post back in 2014.

“What are they going to do? Bend my dog tags? Take my birthday away? chuckle chuckle”

Yep — apparently a Navy Captain did just that once by deliberately sailing parallel to the International Dateline then slipping across it right at midnight.

Tomorrow suddenly becomes yesterday and no birthday for you this year ya chuckle head.

No one ever said the Navy wasn’t salty as hell.

READ NEXT: 22 OF THE FUNNIEST THINGS DRILL INSTRUCTORS HAVE EVER SAID