A Look At the Haunted Grounds of Gettysburg 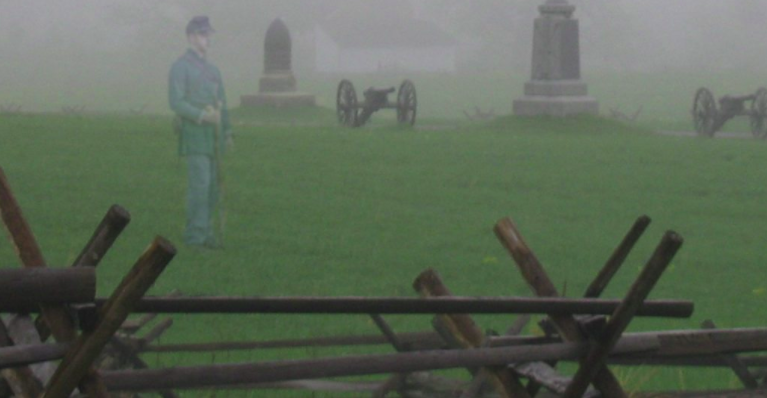 Long after around 7,800 soldiers died in the three day battle of Gettysburg, tourists and ghosts hunters claim to encounter the fallen.

The remote village offers over ten different ghost tours that run year round for guests to get a glimpse of the supernatural at several prominent sites from the battlefield. People report the sunken gut feelings along with hearing faint echos of the battle that occurred.

The site of the infamous downhill bayonet charge at Little Round Top is a common location for sightings of energy balls (or will-o’-wisps) spiraling around the forests. Captured on photo, many believe it to be enough proof that they need.

Another hot spot for spirits in Gettysburg is Sach’s Bridge. The 100-foot expanse not too far from the battlefield is frequently covered in fog.

A group of paranormal investigators went to the bridge to try and get photos or EVP recordings. While there, the fog came back in. They say that they saw lights, heard the sounds, and claim shadowy figures rushed past them.

And then there’s the graveyard.

Visiting the graveyard at night can be unsettling. The fog returns and ghost hunters say that the ghosts want them to leave. The wind ‘pushes’ the visitors away from the grave stones.

Now, there is a perfectly logical reason for all of these. The will-o’wisps of Gettysburg could be floating dust and pollen, since most sightings of “orbs” come during the spring time. There’s nothing supernatural about fog appearing before sunrise and lingering throughout the day. And even in the final picture, snow melting from the gravestone first isn’t unique.

Skeptics can poke holes in nearly everything about the paranormal activities in Gettysburg as being hyped by the locals to keep tourism up. Still, nothing takes away the gut feeling of being on the hallowed grounds of the most pivotal battle in American history.

READ NEXT: THE TOUCHING TALE OF A LEGENDARY WWII BEER RUN