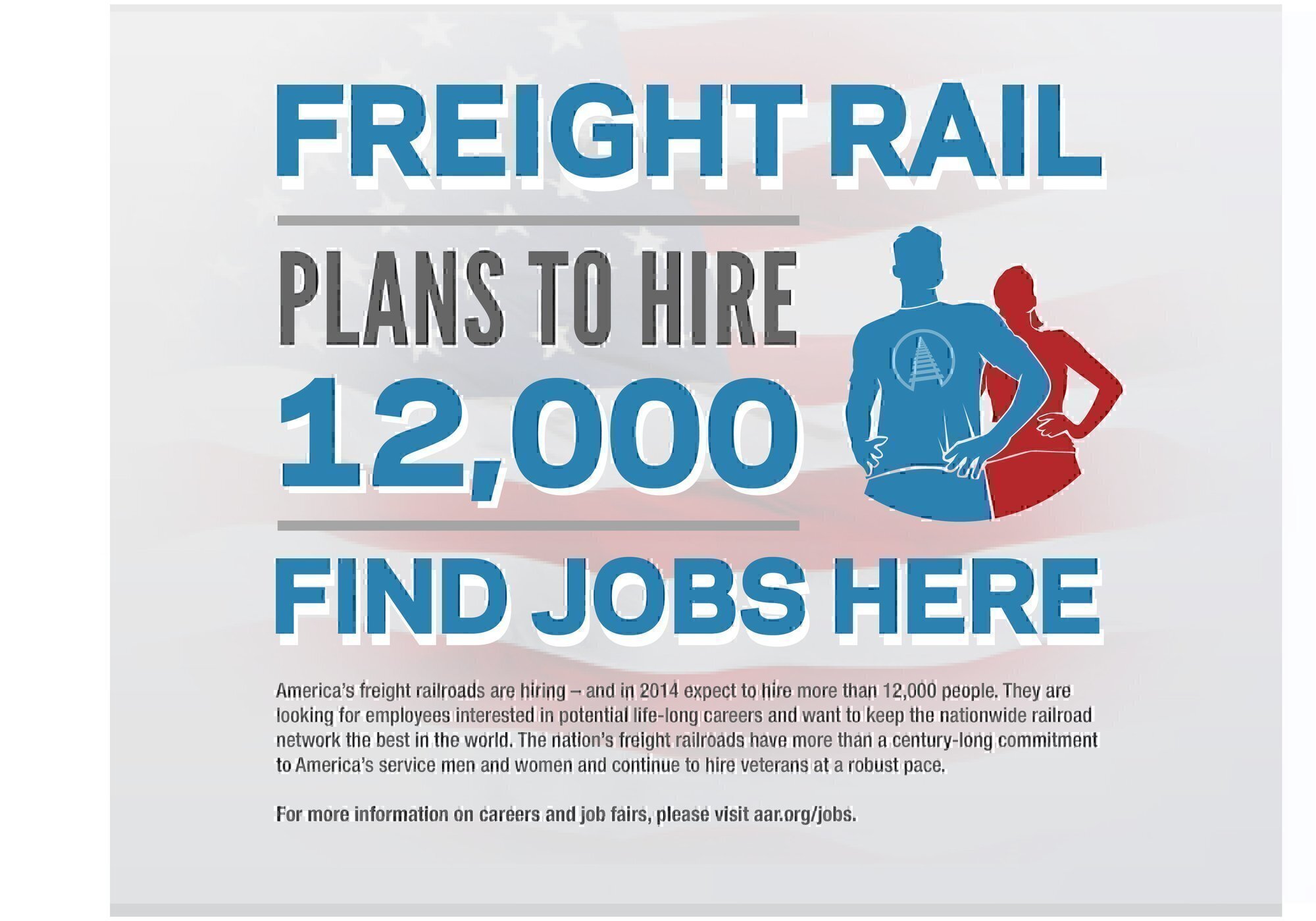 Transportation is vital to the American economy. Every product we buy first faces a sometimes-lengthy journey to the store by boat, plane, train or truck.

For America’s transitioning veterans, that means careers with companies that haul the nation’s goods from place to place.
Take railroads, for example. The Association of American Railroads (AAR) reports that the railroads plan to hire 12,000 new workers in 2014. These jobs are scattered across the country and include a lot of different positions. If you like to work outside, you could be a track and signal maintenance worker. Got the skills to field strip equipment? The railroads need mechanics. Rather ride the rails? They need conductors, too. And leaders, which start with management training programs.

The pay kicks butt. Railroad employees earned an average of $78,085 in 2012, according to the AAR. If you include benefits, the average compensation was $112,600. Not too shabby.

At CSX, the starting pay depends on the craft or position, experience and responsibility.

“Starting salaries range from $45,000 to $60,000 for entry-level positions,” says Steve Toomey, manager of military and diversity recruiting for CSX. “Salary levels generally rise annually. Working overtime in many positions can be an important factor in overall starting salary.”

Maybe the best part for transitioning veterans is that America’s railroads know better than most employers that veterans thrive in this safety-conscious work world, which operates 24/7 – just like the military.

“We are actively seeking employees with the experience of service in the American armed forces to join our company,” Toomey says.

Besides awesome pay, the railroads benefits are squared away. The railroad retirement pension is legendary, and at CSX benefits include medical, dental, a CSX Pension Plan, 401(k), paid holidays and leave of absence (including military leave).

Over-the-road transportation is another thriving sector of transportation. There’s a lot of truth in the old trucking industry adage that says “if you bought it, a truck brought it.” In fact, in 2012 trucks hauled 9.4 billion tons of freight, and motor carriers collected more than $642 billion, or 80.7 percent of total revenue earned by all transport modes, according to a February 2014 report by the American Trucking Associations (ATA).

“Without the industry and our truck drivers, the economy would come to a standstill,” says Bob Costello, ATA chief economist. “Without trucks, America stops.”

“The outlook is looking very good right now as we head into the remainder of 2014 with the expectations of this trend to continue into 2015,” says Cheryl Freauff, recruiting manager for TMC Transportation. “The demand for trucking has never been stronger than we are and will be seeing this year and in 2015.”

The ATA estimates there are more than 25,000 good-paying jobs available right now, and the shortage is expected to grow.
“It is predicted that the industry will need 100,000 to 150,000 drivers in the next three to five years,” says Rob Reich, vice president of maintenance and driver recruitment at Schneider National.

No Experience, No Problem

Transportation employers are willing to train new hires with the skills they need to succeed.

Werner Enterprises is one of the five largest carriers in the United States with more than 7,000 trucks. Chris Polenz, associate vice president of human resources, says Werner is actively recruiting drivers across the country.

“We seek hardworking, goal-oriented individuals with good customer service skills and a personal drive to win,” Polenz says. “We want to attract and hire mission-minded candidates that appreciate the opportunities that come from driving positive results.”

“Werner established our industry’s first apprenticeship program approved by the departments of Labor and Veterans Affairs (VA) that focuses on the recruitment of veterans,” Polenz says.

Eligible veterans with GI Bill benefits can receive up to $13,891 of their tax-free benefits in this on-the-job training program, in addition to receiving their normal pay. Upon completion, veterans receive a certificate from the Department of Labor recognizing them as a professional truck driver.

Freuaff says truck drivers with a Class A Commercial Driver Licenses (CDL) working for TMC can earn between $42,000 and $60,000 per year.

In addition to the salary, Schneider offers numerous benefit programs for its employees. The Schneider military program includes guaranteed home time for weekend drills and annual training – no vacation time required. In addition, the VA has accepted Schneider into its exclusive Apprenticeship Program. Learn more about Schneider read this post; Schneider National Careers for Veterans.

“During a driver’s first year by  working for Schneider, they are eligible to earn a monthly educational benefit check from the VA in addition to their Schneider paycheck – up to $1,236 each month depending on their years of service,” Reich says.
Schneider also provides up to $6,000 in tuition reimbursement to driving school graduates. Plus, Schneider offers extended benefits and differential pay if employees are deployed for up to 18 months and flexible, but predictable, work schedules and a good work-life balance.

The opportunity to grow in your career is also one of the benefits of working for companies in a growing industry.
“The business world can move quite a bit faster than governmental processes or career paths, so do not discount what you can achieve in a very short time while working for a company that promotes from within,” Polenz says. “Promotions can come faster than you might think, so do not be discouraged if you start your new career at a compensation level less than you are currently use to. It can open the door to an opportunity to prove yourself and ultimately move you forward.”

How To Get Hired At BNSF