Army May Bring Back ‘Pinks and Greens’ Uniform Out of Retirement 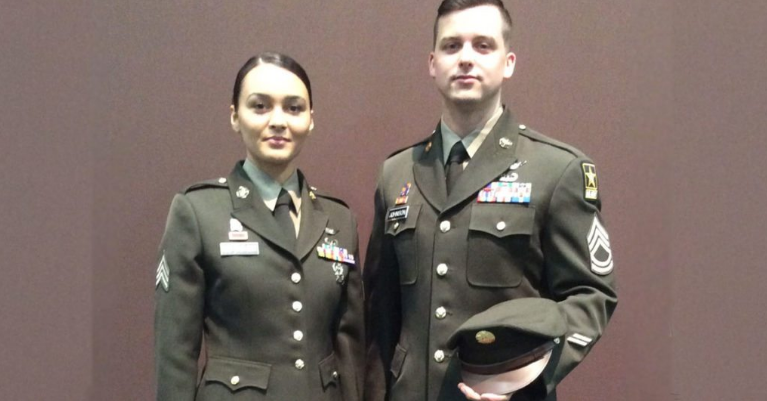 The U.S. Army may be digging its iconic “pinks and greens” out of the WWII-era tough box.

Premiering at the annual AUSA meeting held at the Walter E. Washington Convention Center in Washington D.C., soldiers were walking around the conference floors wearing several variations on the “pinks and greens” dress uniform.

The “pinks and greens” were the standard U.S. Army service uniform during WWII. In 1954, the Army transitioned to just greens until 2007, when then-Army Chief of Staff Gen. Schoomaker debuted the Continental Army-inspired dress blues at the State of the Union Address. Despite the slacks and shirt not being an actual shade of pink, olive drab shade 54 made from rose wool, it’s referred to as pink. If you squint at it just right, you could probably say that it’s pink.

Some wore folding caps while some wore service caps. Some female soldiers displayed skirts, some pants. Female soldiers will now have ties. Still no sighting of the iconic belt around the coat.

Deputy Chief of Staff Lt. Gen. Piggee and Sgt. Maj. of the Army Dailey with the prototype “pinks and greens.” (Image via HQDA G-4‘s Facebook Page)

Sergeant Major of the Army Dan Daily told Army Times that this would be a buffer between the combat and service uniforms. Army Service Uniforms would be bumped up to ceremonial with an option for dinner dress. The pinks and greens would add another layer of formality and offer an alternative to camouflage in the Army Combat Uniform.

Meaning every day wear of the “pinks and greens” — and how the Army would wear the current uniforms — is probably similar to how the Marine Corps currently wears their service uniforms.

The Marine Corps’ mandarin-collared Blue Dress Uniform would be how the Army would wear its blues to formal events that would require the wear of a tuxedo.

And damn do Marines look sharp as hell when they’re on leave. (Photo by Cpl. Brianna Gaudi)

Sgt. Maj. of the Army Dailey also said that soldiers wouldn’t have to pay for them. He said “Enlisted soldiers don’t pay for uniforms. They’re in your clothing allowance.” Whether lower enlisted need to actually spend their clothing allowance on what its meant for is still not clarified (which means if you are a lower enlisted soldier reading this, don’t spend it on booze and video games just yet.)

This article was written by Eric Milzarski and appeared on WeAreTheMighty.com