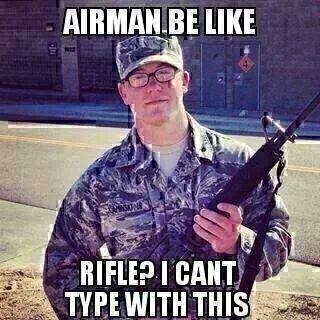 When it comes time to write up the technical pamphlets for the next generation of military gear, the manufacturers … probably won’t call us.

Here are seven perfectly accurate descriptions of military hardware that no self-respecting manufacturer would ever publish:

1. The Apache is the world’s most advanced digital camera

It’s a lot of money for relatively poor image quality, but the zoom is fantastic.

The AH-64 just has so many features that Canon and Nikon would never dream of putting on a camera: multiple rotor blades, a hydraulics systems, missiles, rockets, and a cannon. It’s almost hard to spot the camera sensors in the ball at the front.

Does your armor deploy its own smoke grenades? And depleted uranium shells?

Because the armor is on motorized tracks, you can barely even feel the 60 tons of protection. It even has seats, a feature most body armor lacks.

It gets you high enough to see over the terrain while keeping you low enough to see all your enemies. If only there was something we could do about them from up here?

You can move a LOT of people with one of these ships. Over 6,000 with the old Nimitz-class. The newer Ford ships hold less people, normally about 4,000, but have sweet magnets that could hold literally anything to a fridge. In a pinch, there’s even a way to move people from shore directly to the ship without it docking. But be warned that the cruise directors are pretty uptight and the upper decks are noisy.

5. TOW missiles are a much faster delivery method than carrier pigeons

But, you know, they’re still faster than pigeons.

While carrier pigeons top out at around 90 mph in a sprint, TOW missiles fly at an astounding 715 mph. There’s almost nothing that can get your message across a battlefield faster, and the control cables let the recipient know just where the message came from.

Just a quick note, when sending messages to friends you should be sure to remove the original payload.

6. Rifles can punch holes through hella paper at once

Don’t use boring three-hole punches that can only handle a few sheets when these rifles can create either 5.56mm or 7.62mm openings in dozens of sheets of paper at once.

7. CS gas is a quick and effective decongestant

Neti pots are weird and pouring liquids through your sinus cavities can lead to brain parasites. 2-chlorobenzalmalononitrile has neither drawback and is extremely effective at clearing your sinuses.

READ NEXT: 32 MILITARY GRAPHICS – WHAT THEY MEAN AND WHAT THEY SHOULD MEAN