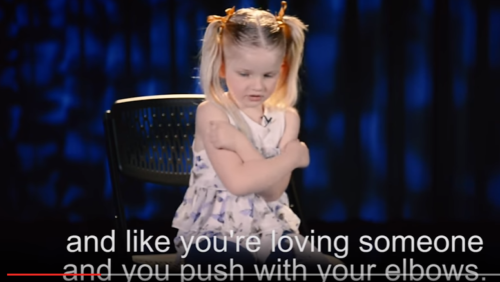 The U.S. Army released a video of military kids answering, or attempting to answer questions about the Army. Now, any time that children are allowed to show their hilarious and adorable ignorance when it comes to grown-up stuff, I’m game. That’s the entire reason why the saying “ignorance is bliss” even exists, I think. Because children don’t know any better than to think that a push up is like when you are loving someone and you push with your elbows. That little blonde girl is absolutely brilliant, by the way. She nailed every answer.

Question #1: The Push Up

Her answer:  As we mentioned above, was that “you put your hands like this, like your loving someone. And then you PUSH with your elbows.” Brilliant. That sounds much harder than an actual push up, therefore being a better exercise. That’s how it works.

Question #2: What Is A Soldier?

Her answer: “My dad is a soldier, and he usually protects the world.” That is absolutely correct. Not just this country. The whole world.

Her answer: 101st. Another correct answer.

Question #4: How do you salute?

Her answer: “Oh yes, I saw Dad do that once. I do that sometimes.” Technically nobody can tell her she’s wrong. And her salute was at least better than these salutes by grown ups.

Question #5: Why Do Soldiers Wear Boots?

Her answer: “To keep their feet safe.” This girl is going to rule the world some day.

Her answer: “The bad guys.” They threw the buzzer at her too quick on this one. There is no way that is wrong. That’s what the Army is supposed to do. They beat the bad guys. Bad guys is a relative term, anyway. On the day Army plays Navy, technically Navy are the bad guys in Army’s eyes. The little blonde girl was so right they thought she was wrong.