7 Military Veterans Who Played in the Super Bowl 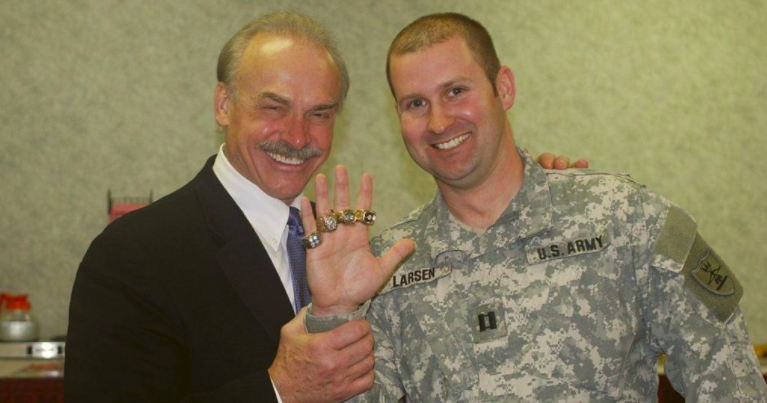 The Super Bowl is where the stakes are highest in the world of professional football.

But for some who have played in that big game, they have staked far more than whether or not they help hoist the Vince Lombardi Trophy — they’ve served in the military, signing “a blank check to the United States of America for an amount of up to and including my life,” to paraphrase a popular quote.

Here are some of the more famous names (and not-so-famous) names who served in the military and played in the Super Bowl:

In the 2017 season, he will coach linebackers for the New York Jets.

According to NFL.com, Greene totaled 160 sacks and five interceptions over 15 seasons.

Cardona will be playing in Super Bowl LI with the New England Patriots, serving as a long snapper. He did the same with the U.S. Naval Academy’s football team – starting as a freshman and for all four years.

A 2015 DoD feature on military-NFL ties reports he serves on active duty, and has assignments with the Naval Academy Preparatory School in Newport and with the destroyer USS Zumwalt (DDG 1000).

Dallas Cowboys Hall of Fame quarterback Roger Staubach, who threw for 153 TDs in a career that came after service in the United States Navy that included a tour in Vietnam. (Photo from Wikimedia Commons)

Prior to Pat Tillman, Roger Staubach was probably the most famous person who had his feet in both the military and National Football League. He played 11 years in the NFL, all with the Dallas Cowboys, throwing 153 TD passes according to NFL.com. He played in four Super Bowls, winning Super Bowls VI and XII.

He served four years in the Navy, including a tour in Vietnam.

Perhaps best known for his Super Bowl XXI heroics as a member of the New York Giants, including a 6-yard TD catch, McConkey wasn’t drafted by an NFL team when he graduated from the Naval Academy.

His naval service included time as a helicopter pilot, but he decided to go for his dream of playing pro football. A 2013 Buffalo News article revealed that it was a family connection to New England Patriots coach Bill Belicheck (whose father was an assistant coach at the Naval Academy) that launched McConkey’s NFL career.

A 4.4-second time in the 40-yard dash didn’t hurt, either. Over his six-season professional football career, NFL.com notes that McConkey had 67 receptions for 1,113 yards and two TDs for the Giants, Chargers, Cardinals, and one other team.

Chad Hennings, a 1988 graduate of the Air Force Academy, was elected to the College Football Hall of Fame on May 16, 2006. He was considered one of college football’s great defensive linemen of his era, a unanimous first-team All-America selection in 1987 who received the Outland Trophy as the nation’s top interior lineman. As a pro, he embarked on a nine-year NFL career with the Dallas Cowboys that brought him three Super Bowl titles. (U.S. Air Force photo)

Though Hennings won three Super Bowls with the Dallas Cowboys, he also was very well known as an Air Force pilot flying the A-10 Thunderbolt II close-air support plane, according to GoAirForceFalcons.com. According to NFL.com, Hennings had 27.5 sacks over his nine-season NFL career.

One reason may have been the fact that in December, 1968, he was drafted by the Army and volunteered to serve in Vietnam. According to a 1969 AP report printed in the Pittsburgh Post-Gazette, Bleier was wounded on Aug. 20 of that year — shot in the thigh and hit by grenade fragments, losing part of his right foot.