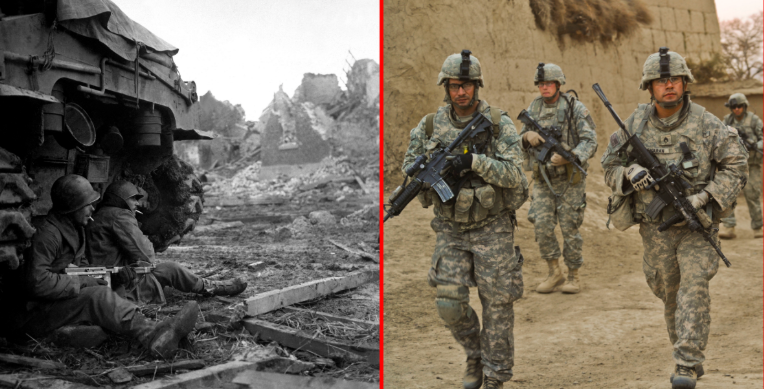 For decades, our troops have faced awful weather, separation from their families, and a diet consisting of the same daily rations, and yet they still complete their vital missions.

However, as time moves forward, so, too, does technology. Because of that, many modern troops don’t face the same problems as those that came before them. It’s important to always remember and respect just how tough our brothers and sisters-in-arms had it way back in the day.

To all past, present, and future veterans out there, WATM salutes you for your outstanding service. Be thankful that you don’t have to worry about these problems that once plagued the old-timers.

1. Getting shot by a small-caliber round

We understand that getting shot sounds like a huge deal — because it is. However, allied troops on the modern battlefield wear a particular type of body armor, called “SAPI plates.” The inserts are made from a ceramic material and are worn over vital organs. These plates protect from small-arms fire and they’re a massive step up compared to what troops wore in Vietnam.

In Vietnam, troops wore only the uniforms issued to them as protection. Taking a round to the upper torso was, almost without exception, a profound injury that left long-term effects.

2. Not hearing from your family back home

Back in the day, the art of letter-writing was a troop’s only avenue of communication with family and friends back home. Those letters could take weeks to be delivered.

Today, we still have a mail service up and running, but we also have this thing called “the internet” — ever hear of it? — that can keep deployed troops in the loop. Soldiers, sailors, and Marines today also have access to phones through the USO and, sometimes, satellite phones to connect them with home in a matter of seconds.

Lance Cpl. Eric W. Hayes makes a phone call to his mother from the phone center at Camp Buehring, Kuwait.

3. Frequent weapon jams during a firefight

Those of us who’ve fired a weapon or two in our lives may have experienced a jam at some point. Even those of us who have seen combat in Iraq and Afghanistan rarely experience weapons malfunctions while sending rounds downrange because modern weapons are so well-manufactured and well-maintained.

It hasn’t always been this way. Ask any Vietnam veteran and they’ll tell you that their weapons would jam “just by looking at them.” We can’t imagine anything worse than losing your primary weapon when fighting the enemy on their home turf.

Today, calling a service member from another platoon or company is as easy as picking up the comms gear headset and requesting someone’s call sign.

Although troops have had verbal communication systems in place for decades, they weren’t nearly as mobile or readily available as they are today. Back then, the radioman was in charge of carrying the proper equipment and usually stuck closely to their superior to make sure they maintained quick access. If that unit’s radio was down, replacing it wasn’t as easy as going to Radio Shack and buying another.

Today, many key members of the infantry platoon carry vital gear, making communication easy as f*ck. If a radio goes down, you can have it replaced in a few hours.

Staff Sgt. Bryan Robbins calls in for mortars during a live-fire exercise.

READ NEXT: 6 TYPES OF PEOPLE YOU MEET AT THE ARMORY

Article Name
4 Old School Problems Today's Troops Don't Worry About
Description
Back in the day troops had to worry about many more problems on the battlefield. Here are 4 old school problems today's troops don't have to worry about.
Author
Tim Kirkpatrick
Publisher Name
We Are The Mighty