6 Types of People You’d Meet at the Armory 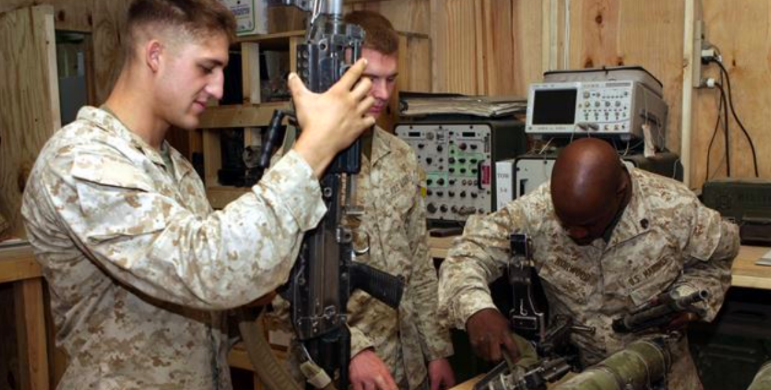 Trips to the armory are supposed to be as simple as picking up your weapon system, training with it in the field, cleaning it, and checking it back in.

However, rarely does that timeline progress as seamlessly as troops would like. For all the newbie Boots out there who’ve never stepped foot inside the secured weapons compound, know that it’s a place where you’ll encounter an interesting cast of characters, all of whom claim the occupation of armorer.

1. The one who can find a single speck of dirt in your rifle

Some armorers like to stick their dirty pinky fingers inside your rifle only to magically discover that your bolt assembly has a greasy smudge on it. This guy isn’t him. Instead, he sticks a clean, sterile Q-tip inside and somehow manages to find the only grain of dirt left on your rifle — and rejects you.

2. The one who knows everything about weapons

It’s almost like they were born inside the Remington or Colt manufacturing plant because this troop is an absolute genius when it comes to firearms. Even if they’re a Boot, the senior enlisted staff respects this guy or gal.

Cpl. Miguel A. Garcia works on a weapon before heading out to help teach the Ghanian Army on armory procedures and weapons maintenance.

3. That one sh*thead who is always cranky

We don’t know who or what puts this armorer in a lousy mood, but they seem to be in one every time you encounter them. Although you do your best to prevent angering them further, there’s no cheering them up.

It’s as if one of their general orders is to always be an ass to those who come within walking distance of the armory window.

4. The one that you can never find when you need to check your rifle in or out

5. The one that was supposed to deploy with your unit, but now works at the armory.

Believe it or not, some troops will put in request after request to transfer to a different job to avoid deploying. Oftentimes, they get sent to work at the armory if they have a basic understanding of weaponry. One day, you’ll stroll up to the armory to check out a rifle, and there they are — it’s that guy from your unit, who’s now working window.

6. The one who gets forced to give hip-pocket classes

It’s simple: some troops have a knack for teaching, others don’t. Typically, nobody’s paying attention to these hip-pocket classes anyway. Troops just want to go to the field and blow something up.