6 Great Phrases You Want to Hear as a Lower Enlisted 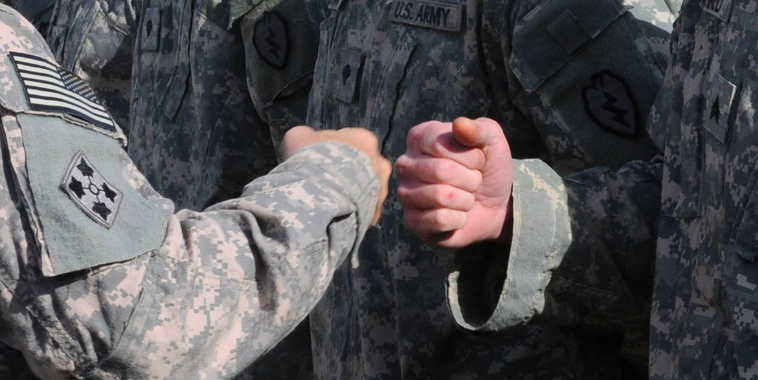 To the absolute surprise of no one in the military, being enlisted personnel can suck. Of course, the magnitude of that suckiness depends on your unit but, overall, there’s a very good reason it tops many peoples’ lists of “worst jobs in the world.”

Being the lowest guy on the worst totem pole isn’t all bad, though. There are genuine moments of levity that keep troops reenlisting — despite how much bile they spew about their unit.

Leaders in the military aren’t the troops’ mothers. They won’t pat them on the back for tying their boots properly or washing their hands like a big kid. What a good leader will do, however, is commend good troops when it’s warranted. And, to be completely honest, there was no better feeling than knowing you’ve impressed your chain of command.

As a lower enlisted, these are the six greatest things you’ll hear.

Good troops will always try to better themselves in their given field. If they’re an infantryman, you know they’re going to try to be the best infantryman they can. If they’re a waterdog, you better believe they’ll be be best damn waterdog the world has ever seen.

Acknowledgement of one’s hard work is rarely direct. You’ll likely never hear, “good job, Pvt. Smith. You really cooked one hell of a batch of eggs this morning.” True gratification usually comes when a leader admits that they’ve been bested at a given task by the person they’re training.

Having a superior admit that you’re in the right is a sweet, sweet feeling.

The thing about being commo was that no one notices you until something goes wrong — and then it’s your fault. Being commended means a lot.

2. “The commander has a surprise for you at close out formation”

Surprises are almost never a good thing. Ninety-nine times out of a hundred, it means that the poor Joe has to go clean the latrines or sweep all that sunshine off the sidewalk.

When it’s specifically noted that a surprise is coming “at close out formation,” however, it usually means either a promotion ceremony or an award. You know, the kind of surprises you actually want.

Or the commander could just have you mop the grass in front of the company. That’d be a surprise to everyone.

3. “I got nothing else for you. Go clean your barracks room or something”

The military can’t stop for a single second. That’s just how it works. So, when the business day is reaching its close, the company area has already been cleaned for the seventh time that week, and there aren’t any pending connex layouts, leaders still need to find something for their troops to do.

There’s an understanding between good leaders and troops that the phrase “clean your barracks room” doesn’t always mean “clean the barracks.” Sometimes, it means go hide out in your room with your phone on. It definitely mean, “start drinking” — you’ll be called back in at any moment.

If your barracks room actually does need cleaning, then it’s not a subtle clue. Clean your damn barracks room.

4. “Your paperwork was pushed through”

You’d think that with the stupid amount of bureaucracy in the military, accountability of paperwork would be paramount. It isn’t. Not by a mile. When people tell you to make copies of everything and keep your originals, it’s not an off-handed suggestion. Things will get lost.

That being said, there are those once-in-a-blue-moon moments when everyone in the training room and battalion S-1 are in sync and absolutely nothing gets lost, torn, or rejected. When everything works in concert and a leave form is involved, it’ll bring a tear to your eye.

Training rooms are like those sloths in Zootopia except the reason they’re so slow is because no one cares enough.

5. “My guy is one hell of a soldier/Marine/airman/sailor”

Leaders are in a perpetual pissing contest, trying to prove that they lead best. That’s part of the reason they push for their Joes to make the “Soldier of the Month” boards. Sure, it looks good for the soldier, but it’s more about getting some bragging rights over other leaders.

Still, knowing that you’re one of the guys that your leader is willing to put on a pedestal is one hell of a feeling.

All you can do is keep being the troop that your leader knows you to be.

This list wouldn’t be complete without the one-word phrase that makes a morning so much better:

READ NEXT: NEW ARMY PT TEST WILL AFFECT EVERYTHING IN ARMY

Article Name
6 Great Phrases You Want to Hear as a Lower Enlisted
Description
Being a lower enlisted is never easy. But there are certain times that are easier than others. Here are 6 phrases you love to hear as a lower enlisted.
Author
Eric MIlzarski
Publisher Name
We Are The Mighty