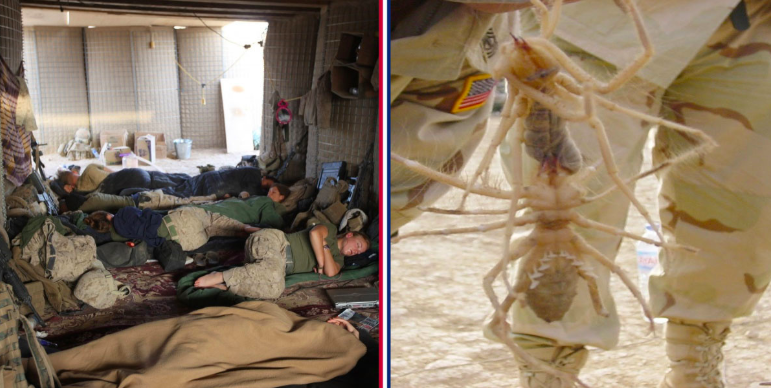 Insects carry disease, infect food stores, and bring loads of other concerns with them. Keeping an area bug-free is a top priority for maintaining good health and hygiene.

The military has plenty of rules and regulations in place to help troops keep an area free of pests (which usually involves a lot of cleaning), but there are far more ingenious — and fun — ways to ward off these crawlers.

1. Busting out a can of bug repellant

A regular can of bug repellent works wonders. Normally, you’d spray it on your skin to deter pests for a little while, but you can also use it to protect an entire area.

The more expedient way, however, is to just spray it everywhere. Or, for maximum recklessness, you could just take a knife to the can and let it explode everywhere. Just watch out for open flames, though, because aerosol bug-repellent is highly flammable.

For the soldier with plenty of faith in the system, the U.S. Army fielded factory-tested, insect-repelling ACUs to soldiers in Iraq and Afghanistan back in 2012. To their credit, the permethrin-treated clothingworks kinda well at first.

Under factory conditions, the ACU-Ps were said to work for fifty washes. In the hands of soldiers, however, they last maybe three before the colors started to run.

Other branches have a version of this, but they actually respray their uniforms instead of just hoping it’s good enough.

Among the least-advised methods of repelling bugs (according to most medical officers, anyway) is to smoke nicotine, but many older vets swear by it — or it’s just a convenient excuse.

Let’s set the record straight on this with some university-backed studies and advice from subject matter experts: Yes, some insects, like flies and some mosquitoes, are deterred by tobacco smoke. However, most insects are actually drawn to heat and smoke because it feels like an ideal environment — burnt and damaged trees. Additionally, plenty of the more aggressive insects, like wasps, are actually drawn to the smell of nicotine and discarded cigarette butts.

Camel spiders are notorious. They’re extremely large spiders that will desperately cling to shade, even if that shade is cast by troops standing in the open desert. They’re not aggressive and non-venomousto anyone larger than a mouse, but no one wants to see a giant f*cking arachnid skitter up close in attempts to stay shaded.

Some troops will openly accept the punishments associated with negligent discharge if it means they can open fire on those suckers. Others opt for a more effective (and satisfying) method: punting ’em into a million pieces when they rush you.

Whatever works, am I right?

5. Night-vision goggles to spot them

Scorpions give off trace amounts of ultra-violet bio-luminescence that can’t be seen by the naked eye. Coincidentally, most night-vision goggles pick up light from both ends of the electromagnetic spectrum. For better or worse, you can spot scorpions more clearly at night through a pair of NVGs.

Be warned. Sometimes, you’re better off not knowing how many scorpions are really hanging around your fighting position.

Just remember, the see-through ones are the most dangerous ones. Have fun!

READ NEXT: HOW TO RANK YOUR CHALLENGE COINS