The U.S. Army and U.S. Marine Corps infantrymen pride themselves on being some of the biggest badasses on every block they roll into.

They have more similarities than differences, but they’re unique forces.

Here are 5 ways you can tell Marine and Army infantry apart: Note: For this comparison we are predominantly pulling from the Army’s Infantry and Rifle Platoon and Squad field manual and the Marine Corps’ Introduction to Rifle Platoon Operations and Marine Rifle Squad. Not every unit in each branch works as described in doctrine. Every infantry unit will have its own idiosyncrasies and units commonly change small details to deal with battlefield realities. Differences between Army and Marine Corps infantry are a follows; 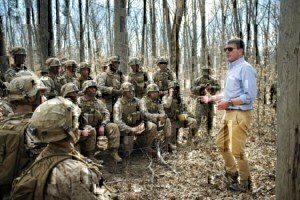 Army and Marine Corps rifle platoons share many elements. They are both organized into larger companies, both contain subordinate squads organized into fire teams and both employ the rifleman as their primary asset. The Army platoon has a radiotelephone operator and a medic. The Marine platoon has a radio transmitter operator and a corpsman who fulfill the same functions. The Marine Corps rifle platoon contains three rifle squads. Each squad is led by a sergeant who has three fire teams working for him, each led by a corporal. The fire team leader typically carries the M203 grenade launcher slung under his M16. Operating under him are the automatic rifleman, assistant automatic rifleman and rifleman. The Army platoons contain smaller squads. An Army rifle squad leader is typically a sergeant or staff sergeant who leads two four-man fire teams. Each Army fire team consists of a team leader, an automatic rifleman, a grenadier and a rifleman. Note that the Army squad is using a dedicated grenadier in place of an assistant automatic rifleman. Typically, one rifleman in each squad will be a squad designated marksman, a specially trained shooter who engages targets at long range. Also, the Army has an additional squad in each platoon, the infantry weapons squad. This squad has teams dedicated to the M240B machine gun and the Javelin missile system. Both Marine Corps and Army infantry platoons operate under company and battalion commanders who may add capabilities such as rockets or mortars when needed. 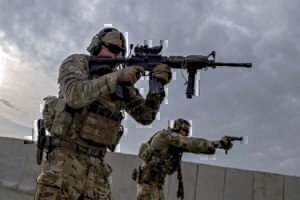 The Army typically gets new weapons before the Marine Corps. It moved to the M4 before the Marine Corps did, and soldiers are more likely than Marines to have the newest weapons add-ons like optical sights, lasers and hand grips. Marines will get all the fancy add-ons—they just typically get them a few years later. When the Army needs a rocket or missile launched, they can use SMAWs, AT-4s or Javelins. For the Marine Corps, SMAW is the more common weapons system (they can call heavier weapons like the Javelin and TOW from the Weapons Company in the battalion). The Army is quickly adopting the M320 as its primary grenade launcher while the Marine Corps is using the M203. The M320 can be fired as a stand-alone weapon. Either the M320 or M203 can be mounted under an M16 or M4. 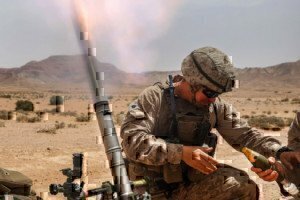 Obviously, infantry units aren’t on their own on the battlefield. Marine and Army rifle units call for assistance from other assets when they get bogged down in a fight. Both the Marine Corps and the Army companies can get mortar, heavy machine gun and missile/rocket support from their battalion when it isn’t available in the company. For stronger assets such as artillery and close air support, the services differ. Marines in a Marine Expeditionary Unit, an air-ground task force of about 2,200 Marines, will typically have artillery, air and naval assets within the MEU. Soldiers in a brigade combat team would typically have artillery support ready to go but would need to call outside the BCT for air or naval support. Air support would come from an Army combat aviation brigade or the Navy or Air Force. Receiving naval fire support is rare for the Army. 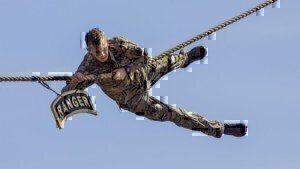 While all Marines train for amphibious warfare, few soldiers do. Instead, most soldiers pick or are assigned a terrain or warfare specialty such as airborne, Ranger, mountain or mechanized infantry. Ranger is by far the hardest of these specialties to earn, and many rangers will go on to serve in Ranger Regiment. The Marine Corps categorizes its infantry by weapons systems and tactics rather than the specialties above. Marine infantry can enter the service as a rifleman (0311), machine gunner (0331), mortarman (0341), assaultman (0351) or antitank missileman (0352). Soldiers can only enter the Army as a standard infantryman (11-B) or an indirect fire infantryman (mortarman, 11-C).

Marines who want to push themselves beyond the standard infantry units can compete to become scout snipers, reconnaissance or Force Recon Marines. Scout snipers provide accurate long-range fire to back up other infantrymen on the ground. Reconnaissance Marines and Force Recon Marines seek out enemy forces and report their locations, numbers and activities to commanders. Force Recon operates deeper in enemy territory than standard reconnaissance and also specializes in certain direct combat missions like seizing oil platforms or anti-piracy. Soldiers who want to go on to a harder challenge have their own options. The easiest of the elite ranks to join is the airborne which requires you to complete a three-week course in parachuting. Much harder is Ranger regiment which requires its members either graduate Ranger School or get selected from Ranger Assessment and Selection Program. Finally, infantry soldiers can compete for Special Forces selection. If selected, they will leave infantry behind and choose a special forces job such as weapons sergeant or medical sergeant. Infantrymen can also become a sniper by being selected for and graduating sniper school.

11 of the Most Dangerous U.S. Military Jobs