10 Life Hacks That Got You Through Deployment 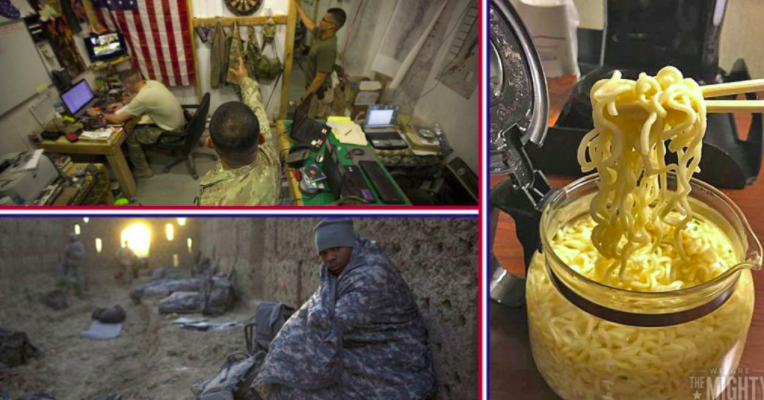 The one thing no one ever talks about with deployments is the mind numbing boredom that comes between missions. Times have changed from the “Wild West” days of early 2000’s where even having a power outlet was a luxury.

Things have gotten slightly less monotonous but they haven’t changed that much. Troops are still sitting at the same USO, playing on the same broken Foosball table, watching the same videos that have been shared by everyone.

Here are some pro-tips that help make the deployment a little less sucky.

There was nothing more valuable than a cheapo coffee pot that every PX larger than the back of a semi-truck sold. Even then they would probably still sell them.

Instead of using it for coffee like officers in S-3 do, place ramen noodles in the glass carafe and the powder on top where the hot water will eventually drip down. It will save you time on running to the dining hall or spare you another night of MREs (depending on your level of POG-ieness).

It also acts as the bowl from which to eat. (Image via The Mary Sue)

You can talk about the blandness of MREs for months at a time, but there’s hope: you can combine your way through any MRE, it just takes a lot of ratf*cking a bunch of ingredients from several other MREs. It’s common knowledge to combine the Cocoa powder, coffee, sugar, and creamer to make Ranger Pudding, but with enough creativity, you can take it to the next level.

Taken to the extreme, even the old dreaded Egg and Cheese Omelet (which was thankfully removed years ago, a long enough time to make it inedible by Army standards) could be mixed with the Beef Stew and crackers to make it “decent”.

If all else fails, have family members send out cheap seasonings like Lowry’s or Tony Chachere’s.

Mix until decent (Image by Logan Nye of WATM)

8. Knock off all that inter-unit bullsh*t

There’s no reason to keep up the “screw (whatever MOS) platoon!” Don’t stop playful banter — but don’t be a jerk, either. One team, one fight.

Everyone has one or two things that can help everyone else while deployed. Commo always have batteries and new movies. Medics always have medical supplies and hygiene stuff. Chaplin Assistants always have the best care packages. Mechanics always have cigarettes. The list goes on.

We all embrace the suck deployed.

If you can manage to get a bunk bed all to yourself, you’ve got it made.

Instead of storing gear on the empty bunk, hollow the bottom bunk out and brace it with plywood. This way you can use that space for your own bedroom. Complete with tough box furniture and one of those cheap lawn chairs.

Just tactically acquire a second poncho for both sides. (Image via Defense.gov)

Troops always deploy to unpleasant areas of the world — usually in crazy hot climates. It gets so bad that drinking water becomes so blistering hot, you feel more thirsty after drinking it than you did before you took a swig.

Here’s the solution: Take a single cotton sock and get it damp. Put a cool bottle of water from the dining hall or S-shop mini-fridge and stick the bottle in the sock.

The eventual evaporation helps cool down the water bottle inside. Same concept behind sweating. Because science.

Just use clean socks. Because logic. (Image via Eabco)

5. The Postal Service is faster than the Connex

Deploying to the sandbox and coming back stateside, troops split their gear and personal belongings into two categories: Stuff they take on the plane with them and stuff they send with the connex (which arrives months later).

Why not split it into a third? Things too bulky for the plane, but things you’d want immediately. The moment you get the APO address, send out your Xbox, cheapo TV, gear that might be useful, and extra personal supplies (hygiene stuff, ramen noodles, etc.)

Same deal for your return trip, too.

The postal service works both ways. (Image via Army.mil)

If you are deployed to an outlying post in the middle of nowhere, you probably noticed a few scorpions.

Spotting them while you’re walking at night is tricky. Since scorpions glow, pick up a black light flashlight to help guide your way.

Looks like we have another competitor for this week’s Hunger Games! (Image via Phoenix Pest Control)

3. MOLLE pouch for your Woobie

In the PX, there’s countless amounts of “sort of” military gear that no one is ever issued and no one really has a purpose for. The M249 SAW ammo pouch, however, can come in handy for plenty of things.

If you get sent on multi-day missions, that pouch fits your Woobie perfectly. No need to awkwardly dig through your assault pack when the ammo pouch is on the side.

Who would actually argue against bringing the greatest piece of military gear with them? Heartless souls. That’s who.

We Are The Mighty does not encourage smoking. But if you must smoke…

Every smoker who goes without a cigarette for an extended period of time can tell you that you can spot a cigarette from blocks away.

In the day time, the smoke floats and gives your position away. Especially dangerous at night is the glow of the cigarette, which can give a sniper a bright red target to aim at.

Take an expended .50 cal brass from the Ma Deuce and place it over the cigarette if you just need to have one while on mission. Still does nothing for the smell though.

And the brass slips perfectly under the MOLLE strap. (Image via Wikicommons)

1. No one is as stealthy as they think

It should seem obvious, but with your entire platoon squished into a tiny tent on a tiny outpost, there is very little privacy. The sooner you realize it, the sooner your platoon stops mocking you.

If you think you can take a piss in a Gatorade bottle without everyone else in the tent hearing it because you’re too damn lazy to get out of your bunk, you’re wrong. Same goes with everything else that happens in the tent.

It’s a “Safe for Work” way of saying “Dude, we can hear you…” (Image via Stripes)