10 of the World’s Most Lethal Special Operations Units

Special operations forces are the most highly disciplined, mission-capable, and formidable units in the world. They go through rigorous selection processes and training in order to conduct unconventional warfare tasks that are beyond the means of standard military forces.

The truth is, the world may never know exactly what these teams have accomplished, but their public records contain enough to earn global respect. In no particular order, these are ten lethal special operations units from around the world. 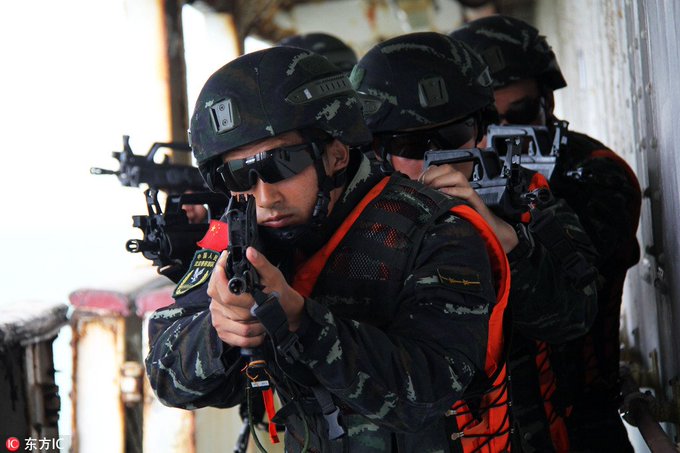 Formerly known as the Snow Wolf Commando Unit, named for the tenacity of arctic wolves and their ability to survive in harsh conditions, this is a specops unit of the People’s Republic of China. At their inception, they spent five years training in secret to conduct counter-terrorism, riot control, anti-hijacking, and bomb disposal for the 2008 Summer Olympics in Beijing.

The unit prides itself on the speed and accuracy of their marksmanship, their strength and stamina, and their spirit of self-sacrifice. Each recruit must serve in the People’s Armed Police for 1-2 years before undergoing physical and psychological tests. Perhaps where they excel the most is in martial arts and close quarter battles, but their sniper squadron shouldn’t be discounted.

Moving on, the next group made the news when one of their operators drowned an ISIS terrorist in a puddle. Yeah. Let’s talk about:

SBS with U.S. Delta Force at the Battle of Tora Bora.

“Not by strength, by guile” is the motto of the Royal Navy’s Special Boat Service, one of the United Kingdom’s most secretive and elite military units.

The SBS is the UK’s equivalent of the US Navy SEALs. The selection process for the elite team has a 90% failure rate and includes a grueling 4-week endurance test that grows increasingly more challenging and concludes with a 40 kilometer march — that’s 24.8 miles for my fellow Yankees — which must be completed in under 20 hours.

And that’s just Stage 2 of training.

Graduates will master weapons handling, jungle training, complex fighting, and combat survival before they are officially inducted into the elite unit.

Born out of World War II, today, the SBS remains one of the most well-respected units in the world. Since 9/11, the Special Boat Service has been deployed against Al Qaeda, ISIS, and the Taliban, as well as on rescue missions around the globe, including in Sierra Leone and Libya.

GROM is an acronym that loosely translates to the Group for Operational Maneuvering Response.

More poignantly, however, grom means “thunder” in Polish. It’s a unit that can trace its lineage to the exiled Polish paratroopers of World War II known as “the Silent Unseen.” 315 men — and one woman— trained for months in Great Britain before jumping into occupied Poland to oppose the Nazi hold there.

In 1990, the GROM unit was organized after Operation Bridge, a mission to help Soviet Jews enter Israel. Intelligence reports indicated a significant Hezbollah threat in the area of operations, so the elite counter-terrorist force was approved. It remained a secret from the public until 1994, when they deployed to Haiti for Operation Restore Democracy.

GROM performs rescue operations, including hostage recovery, as well as counter-insurgency missions. They have extensive weapons and medical expertise and have mastered a variety of military disciplines, including parachuting, amphibious insertion, diving, pyrotechnics, and vehicle handling.

Whether fighting terrorists or war criminals, GROM more than lives up to its name.

7. The Special Services Group in Pakistan

Business Insider reported that training for the Pakistani Special Services Group requires a 36-mile march done in 12 hours and a five-mile run in full kit in 20 minutes — if that’s true… then holy s***.

Due to their location, they are kept actively engaged in counter-terror missions. From hotspots along the India-Pakistan border to the ongoing conflict in Afghanistan to Operation Zarb-e-Azb, a joint military offensive targeting terrorist organizations, the SSG goes where the fire is hot.

Delta Force is the U.S. Army’s elite counter-terrorism unit, with Army Rangers and Green Berets among its numbers, but it also has operators from the Navy and Air Force. It’s been called many things — Special Forces Operational Detachment-Delta, the Combat Applications Group, and now the Army Compartmented Elements, but throughout its short history, it has maintained its superior ability to capture or kill high value targets, dismantle terrorist cells, and conduct covert missions in any area of operations.

Most of the missions executed by Delta Force remain classified — and it’s rare to find an official document that even acknowledges the unit — but one of its most notable accomplishments includes Operation Red Dawn, the capture of Saddam Hussein.

A leaked recruiting video gave a glimpse at different training methods for Delta Force, including tactical driving, vehicle takedowns, and assaulter team tactics. A testament to their precision, one of their final exams includes breaching operations with fellow team members playing the hostage as his brothers live fire against targets nearby. The operation builds trust within the team and provides the shooter a sober reminder not to hit the hostage.

The Group D’Intervention de la Gendarmerie Nationale is one of the world’s most combat-experienced counter-terrorist organizations. Somewhere between a SWAT team and Delta Force, the French GIGN responds to terrorist threats or domestic attacks.

The enemy has evolved — and so, too, has the GIGN. Their mission is to get access to the scene of an attack as quickly as possible, then capture or kill the assailants before they can inflict more carnage.

Their training program is notoriously brutal and lasts fourteen months — if recruits can make it that long. One documentary team followed a group of potential recruits and saw 120 of them whittled down to 18 in two weeks. It includes one of the best marksmanship schools in the world, weapons handling, airborne courses including HALO jumps, hand-to-hand combat, diving, survival training, and explosive ordnance disposal.

These guys are lethal, but they value fire discipline. Rumor has it that they’re just issued a 6-shot .357 revolver as their official sidearm — with only 6 rounds, you bet they’re going to make each one count.

​4. The Sayeret Matkal of Israel

Also known as “Unit 269,” Israel’s Sayeret Matkal is a highly secretive special-operations brigade with almost legendary status. Since its inception in 1957, Sayeret Matkal has gained a reputation for its deep reconnaissance capabilities and counter-terrorism and hostage recovery missions.

They rely on secrecy, attacking in small numbers and in disguise, then fading away before the enemy realizes what happened.

One of its most notable operations is perhaps the Entebbe rescue in 1976, when an Air France plane carrying 250 passengers to Paris from Tel Aviv was hijacked by terrorists. The non-Israeli passengers were released, but 106 hostages remained. The rescue mission took a week to plan and a little over an hour to execute.

The disguised task force was airlifted in with Land Rovers and a Mercedes-Benz. They managed to infiltrate the local army, kill the terrorists, and rescue all but four of the hostages. Only one Israeli soldier was killed in the attack.

That’s the thing with Sayeret Matkal — once you know it’s there, you’re already out of time.

Spain’s Special Naval Warfare Force was created in 2009 when the country merged different units of the Spanish Navy into one combatastic entity. The “Fuerza” is comprised of the Special Combat Divers Unit, Special Explosive Diffusers Unit, and the Special Operations Unit — its main tactical predecessor.

They have a strong history of utilizing those tactics in hostage rescue and pirate confrontation. In 2002, the hombres rana supported Operation Enduring Freedom in the Indian Ocean when they stormed a North Korean vessel transporting SCUD missiles to Yemen. Then, in 2011, they rescued a French hostage from Somali pirates.

And that’s just what’s known to the public — like the other elite units on this list, most of their missions remain classified.

Russia’s badass Spetsnaz is shrouded in mystery, but it dates back to the Red Bolshevik Guard, a paramilitary force organized during the height of the Russian Revolution in the early 20th century. Most of its members are comparable to U.S. Army Rangers, but an elite few train like Delta Force.

They had a traditional background of battlefield reconnaissance, shattering enemy chains of command and lines of supply, and targeting the enemy’s tactical weapons and advantages, but one thing that makes them different from U.S. operators, however, is their freedom to “mix and match” their weapons.

Recently, Russia has been increasingly modeling its Spetsnaz off American counterparts.

To a casual observer, they can appear difficult to distinguish from one another, but at the end of the day, there’s a reason Russia is trying to keep up with the United States.

Members of U.S. Navy Seal Team One move down the Bassac River in a SEAL Team Assault Boat (STAB) during operations along the river south of Saigon. November 1967.

I lied. I saved this one for last. Because, come on.

United States Navy SEALs are perhaps the finest special operations forces in the world. The competitive standard to even be considered for BUD/S training is to swim 500 yards in 10:30, 79 push-ups, 79 sit-ups, 11 pull-ups, and a 10:20 1.5 mile run. That’s just to get in.

Preparation to become a SEAL consists of Basic Underwater Demolition, Parachute Jump school, and SEAL Qualification Training — which have all been described lightly as “brutal” — then they do another 18 months of pre-deployment training.

From the Korean War and the Vietnam War to Somalia to Operation Iraqi Freedom and Operation Enduring Freedom, to Operation Inherent Resolve, and, of course, the death of international terrorist Osama bin Laden, Navy SEALs have made their mark.

READ NEXT: WWII VET PLAYED SONG FOR SNIPER WHO TRIED TO KILL HIM