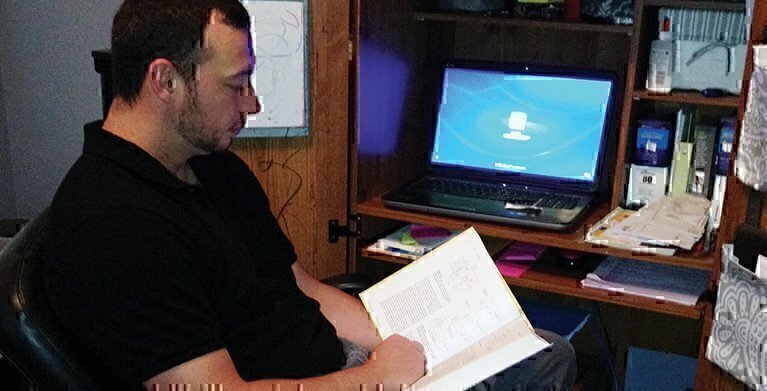 Becoming a U.S. service member was not part of Michael Doub’s original plan.

As a multi-sport athlete at Surry Community College in Dobson, N.C., he helped his basketball team land a top 10 position in the National Junior College Athletic Association (NJCAA) standings. As a baseball player for Surry, he was a closer – a relief pitcher specializing in final inning strikeouts during tied or close games.

Everything was falling into place.

“Initially, it was not a goal of mine to serve in the military,” says Doub, a clinical radiology engineer at Wake Forest Baptist Medical Center in Winston-Salem, N.C. “At Surry I earned All-Conference, All-Tournament and All-Region honors. My sights were set on continuing my education and pursuing an athletic career.”

His athletic abilities attracted the attention of coaches at Ferrum College, and Doub was accepted to the Virginia school to play baseball and basketball. Midway through his junior year, however, he said juggling his academic and athletic responsibilities, while grappling with mounting finances, began to take a toll. “At the start of the second semester, money for textbooks ran dry – as a computer programming major, that’s not a good situation.”

Back home in Winston-Salem, a U.S. Marine Corps recruiter spotted him and passed along his contact information. “At that point, I had applied for countless positions, ranging from security guard to janitor, but I never received any call backs.” In the days that followed, Doub realized he might benefit from the discipline and leadership experience that the USMC could offer.

“I was first stationed at Camp Lejeune with 2nd Battalion, 2nd Marines, otherwise known as ‘The Warlords’ – ooh rah! My military operating specialty (MOS) was in electro-optical ordnance repair. I served two tours in Iraq earning my Combat Action Ribbon and was honorably discharged as a USMC corporal in January 2008,” he says. “All told, I completed five years active service and three years inactive reserve.”

In between earning an associate in applied science (AAS) degree in electronic engineering and a second associate degree in biomedical equipment technology, Doub watched manufacturing jobs leave the region as he considered the ways his training would translate to the civilian workforce. He found correlating job openings as a biomedical imaging engineer and made sure his course work connected to the requirements. An instructor recommended Thomas Edison State University (TESU), and Doub applied to the Bachelor of Science in Applied Science and Technology (BSAST) degree program in biomedical electronics. At the same time, an internship resulted in an offer for a full-time position at Wake Forest Baptist Hospital.

“Staff at TESU and the U.S. Department of Veterans Affairs have been a huge help in my transition,” remarked Doub. “I transferred a ton of previous college credits in addition to credits for my military experience. Many courses that I assumed would only be applicable in the military actually transferred to my degree program,” says Doub, who hopes his degree will position him for managerial roles in the future.

In spite of his outward success, however, Doub admits that his transition to civilian life was challenging.

“I’m the type who tries to square everything away before I step into a mission, and I really applied myself in my End of Active Service Training classes, but it was difficult. From dealing with finishing college, to starting a family, and not being 100 percent sure of what my source of income would be next, I would end up taking jobs that were not necessarily a good fit,” he recounted. “But the main thing was, I had a goal. Without a goal in mind, you can’t start toward it. Luckily I have a wife, Amanda, who is very supportive and a good family that stuck with me. For my fellow veterans, I will say this: The road is hard. The road is long. But at the end of the day, it will all be worth the effort.”

Doub recommends that veterans look for something that interests them and offers solid prospects for the future. He said he watched many of his friends pursuing fields that were a mismatch for them – often due to shifts in their local job market – thereby wasting precious time and having to enroll or re-enroll in school to pursue a different track.

“Minimally, you have to look at where you live or want to live and examine the surrounding job market. Draw on your military experience, make the best use of your tuition assistance benefits, discover what kind of jobs are available, and find out what you know you will be happy doing.”