The 8 Worst Jobs You Performed in the Military 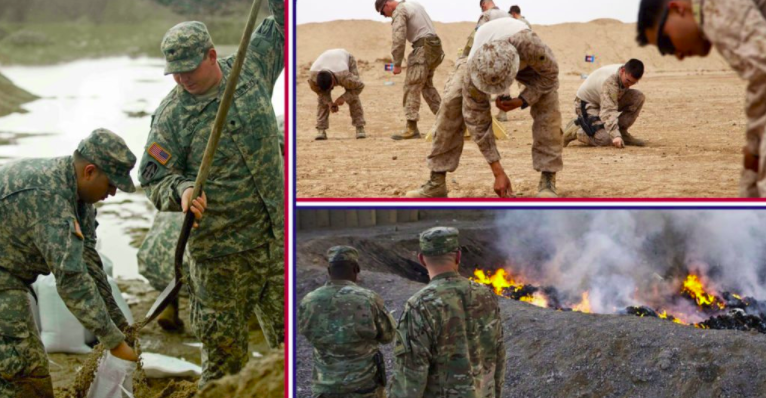 Troops don’t become salty because of the “long hours and deployments” like the lists claim. They suck it up, buttercup. What really shatters morale are details. But hey! Somebody has to do them, right?
Keep in mind, these aren’t always punishments. They can be, but almost everyone can get slapped with these from time to time.

Imagine having a garage that can never stay clean. Just full of crap that never gets touched except when it gets reorganized months later by the ‘Good Idea Fairy.’

Organizing these before deployment is great. Don’t expect to open it back up in country and anything to be in any kind of order. You know what that means…

#2. Police calls (and other cleaning tasks)

No matter how many cigarette butts troops pick up through out their career, there will always be more flicked out the window of a car or smothered underfoot and abandoned.

Just like the connex, most of these things only ever get touched when there’s a new commander signing off on the inventory.

Painstakingly laying out every last piece of equipment takes forever and when you finally make it look like everyone else’s layout, the commander just ends up fudging the hand receipt.

(Mostly) gone are the days of skinning potatoes.

Doesn’t make working in the kitchen beside the cooks any less mind-numbing. Afterwards, maybe you’ll show a little empathy next time you want to raise hell because they “wouldn’t give you double servings of bacon just as the dining facility opened up.”

Writer’s note: I am a firm believer that if anyone makes a scene in a dining hall, loses military bearing, and starts cussing out the cooks over a serving size, they should be sent to the back to work KP, and we should bring back the time-honored tradition/punishment of skinning potatoes.

If you thought being promoted out of the E-4 mafia meant you’d be safe — think again.

No NCO enjoys standing by and watching troops pee. And if they do, they’re freaking creeps who are the reason we have safety briefs.

With everything in the military, there’s a limit to the amount of times you can clean something, organize something, or fine tune something until it’s completed (or needs fixing again).

Not sandbags. Fighting in desert environments means that there is a never ending supply of sandbags to fill. You’d think it’d stop when the bags ran out…but no, it doesn’t work like that.

The supply NCO doesn’t even order the sandbags. The empty bags get pulled out of their ass like tissue paper. The supply NCO then laughs maniacally at the dread of all the lower enlisted.

Burn pits were used to clear out garbage and human waste in a hurry. Even though more efficient, eco-friendly, and healthier options (for literally everyone in the vicinity) have been more readily available, reports of open air burn pits still exist.

At the expense of sounding like a cheap law firm swarming victims like vultures, if you believe you might have be affected by burn pits, register with the VA at this link here. It’s a very serious health concern and the more veterans that stand up, the more seriously the issue will be taken.

The results should not be inconclusive. If the CDC says five cigarettes a day is unhealthy enough to be a medical concern, spending 12 months with your face in front of plumes of burning human sh*t shouldn’t be seen as less risky than some f*cking dust.

There is no contest to what the most painful detail or duty in the military actually is.

Nothing can come close to what kind of heart break and hell the Casualty Notification Officers go through each and every time they walk up the doorway. They must skip the euphemisms like “they passed away.” No. They have to be blunt and straight forward. “Your __ was killed less than four hours ago.”

It’s the most thankless job in the military. No one wants to tell a parent, a spouse, or a child that their hero isn’t coming home. They have to be the ones to break the news. Over and over again.

While you clean the floors, laying out your vehicles kit, or skinning potatoes, just know it could always get worse.