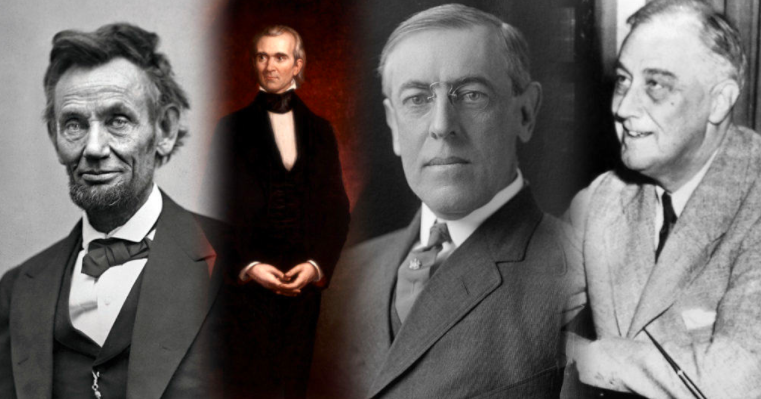 By the power of the Constitution, American presidents are the ultimate link between the people and the military. As commanders-in-chief, presidents are responsible for committing the nation to war — a very tall order.

Here are 4 presidents that navigated the vagaries of public sentiment better than most:

President James K. Polk was almost certainly not a snake that dressed up as a human, despite his appearance. (Portrait: George Peter Alexander Healy)

President James K. Polk was an expansionist and wanted land from Mexico so that the U.S. would stretch from sea to shining sea. There is a dispute among historians on whether Polk wanted a war or was just willing to accept one, but he sent 4,000 troops under general and future president Zachary Taylor to a portion of land claimed by both Texas and Mexico.

Ten months later on May 8, 1846, Mexican troops attacked what they perceived to be American troops on Mexican land.

Polk acted quickly when he got word of the fighting. On May 11 he asked Congress for a declaration of war with the cry that Mexico had “shed American blood on American soil!” While a very few anti-expansionist Whigs – including then-Senator Abraham Lincoln – protested the fact that it was technically not “American soil,” the rest of the Whigs and the majority of Congress voted for war.

2. Lincoln rode on the coattails of his generals

President Abraham Lincoln’s tactic for keeping public support of the war was to win it. (Photo: Alexander Gardner)

President Abraham Lincoln, one of the most popular and well-respected leaders in American history, was not always popular in his time. Indeed, during the road to the 1864 election with the war going badly. Even Lincoln expected a crushing defeat in his re-election bid. When the Democrats nominated Gen. George B. McClellan on a platform of peace with the breakaway Confederacy, all seemed lost.

But Lincoln had pushed hard for aggressive generals during the war, and two of them saved him in the final months before the election. Lt. Gen. Ulysses S. Grant had been handpicked by Lincoln for the top job, and Grant’s favored subordinate, Maj. Gen. William T. Sherman, delivered Atlanta to the president on Sep. 3, 1864.

The victory in Atlanta was soon followed by Grant’s wins in the Shenandoah Valley campaign. With the war suddenly going well, Lincoln was able to rally the North to keep going and win the war.

Lincoln still nearly lost the election. But, despite how closely contested each state was (he won nearly all of them by narrow margins), he achieved an electoral college landslide of 212 to 21. He saved the Union but doomed himself to an assassin’s bullet on Apr. 14, 1865, less than six weeks after his second inauguration.

3. Wilson leaked the “Zimmerman Telegram” to the press

President Woodrow Wilson looked like a nerdy professor because he was one, but he still managed to mobilize America in World War I. (Photo: Harris & Ewing, Library of Congress)

President Woodrow Wilson was notoriously reluctant to join World War I despite Germany’s unrestricted submarine warfare which killed hundreds of Americans and sank prized ships. One of the tipping points for Wilson was when Britain revealed the “Zimmerman Telegram” to him.

The Zimmerman Telegram was a secret proposal from Germany to Mexico. Germany promised Mexico Texas, Arizona, and New Mexico if Mexico entered World War I as a German ally against the U.S. Wilson authorized the Navy to begin arming civilian vessels and leaked the telegram to the public. Once the American public was in a fury, he went to Congress and asked for a declaration of war.

President Franklin D. Roosevelt holds a “Fireside Chat” and speaks directly to the American people on Dec. 24, 1943, about the Tehran and Cairo conferences. (Photo: National Archives and Records Administration)

President Franklin D. Roosevelt knew a thing or two about keeping up appearances. Though crippled by polio, he led America through most of World War II primarily by projecting strength. To make sure that reporters didn’t skew his message or show him looking weak, he befriended the journalists who covered him by holding small, intimate meetings with them in the Oval Office.

When he wasn’t glad-handing journalists, he spoke directly to the American public over the radio during his iconic “Fireside Chats” that actually started in the early days of his presidency when the U.S. was more worried about the Great Depression than the wars in Europe and Asia.

READ NEXT: HOW TO AVOID BEING ‘THAT GUY’ IN YOUR PLATOON OR WORKPLACE

Article Name
4 Ways Wartime Presidents Rallied Americans
Description
Throughout the history of the United States Presidents have been able to garner public support in different way. These 4 wartime Presidents were able to rally support through these unique tactics.
Author
Logan Nye
Publisher Name
We Are The Mighty