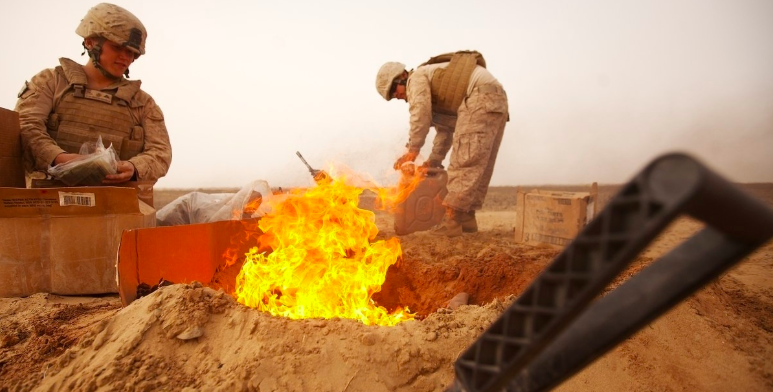 The exposure of troops to burn pits and open-air sewage pits is a black eye on the Global War on Terrorism. While troops were fighting in Iraq and Afghanistan, a quick and easy solution to getting rid of garbage and sewage was to simply set it on fire. Years later, this has resulted in wide-spread health issues that affect many of our veterans.

The use of burn pits and the subsequent failure to address them as a serious issue has been likened to the struggles that Vietnam vets faced with Agent Orange in countless headlines. And, frankly, there is truth to this comparison.

It shouldn’t take this much hassle to prove that breathing burning garbage, chemicals, literal human sh*t for twelve months is harmful to our lungs.(photo by Sgt. Anthony L. Ortiz)

Agent Orange was a powerful herbicidal chemical used to defoliate the jungles of Vietnam. Countless veterans suffered from leukemia, Hodgkin’s lymphoma, and various cancers as a direct result of being exposed to Agent Orange. It took until 1991, eighteen years after U.S. involvement in Vietnam, for the Agent Orange Act to pass. It took eighteen years for veterans to be declared eligible for medical treatment for issues resulting from exposure to a known toxic chemical.

History is repeating itself with the veterans of the post-9/11 generation who are walking in frighteningly similar footsteps. The IAVA has been making strong headway in getting burn pits and open-air sewage pits recognized as hazardous to troops’ health. But full recognition requires proof and an accurate count of exactly how many veterans this practice has effected.

We cannot make the same mistake with our veterans again.(U.S. Air Force Photo)

This is where the VA’s Burn Pit Registry comes in.

If you’ve been affected by burn pits or open-air sewage pits, it is of the utmost importance that you — and every veteran who has been affected — make your voice heard. At the time of writing, over 144,000 veterans (not even 1/20th of the number of veterans who’ve been to Iraq or Afghanistan) have completed their registry questionnaire.

The questionnaire will take around 40 minutes to complete and it’s very thorough in documenting every base, FOB, COP, and anywhere else you’ve deployed. If you took R&R;, you’ll even have to document your one-week stay at Ali Al Salem before getting back into the details about your deployment.

It should be noted that, despite its name, the Burn Pit Registry also covers open-air sewage pits.(Photo by Sgt. 1st Class Erick Studenicka)

This is much bigger than any individual. Every questionnaire filled out is one step closer to getting our brothers and sisters the medical treatment that they need. While only the affected veteran can fill out the form, anyone can help by spreading awareness of the Registry and its significance.

READ NEXT: THIS MEDAL OF HONOR RECIPIENT LED A COUNTERATTACK HIS FIRST TIME IN COMBAT

Article Name
Why It's Important for Veterans to be on the Burn Pit Registry
Description
Post 9/11 military veterans who have been exposed to either burn pits or open air sewage pits should register their names on the burn pit registry. Here's why.
Author
Eric Milzarski
Publisher Name
We Are The Mighty