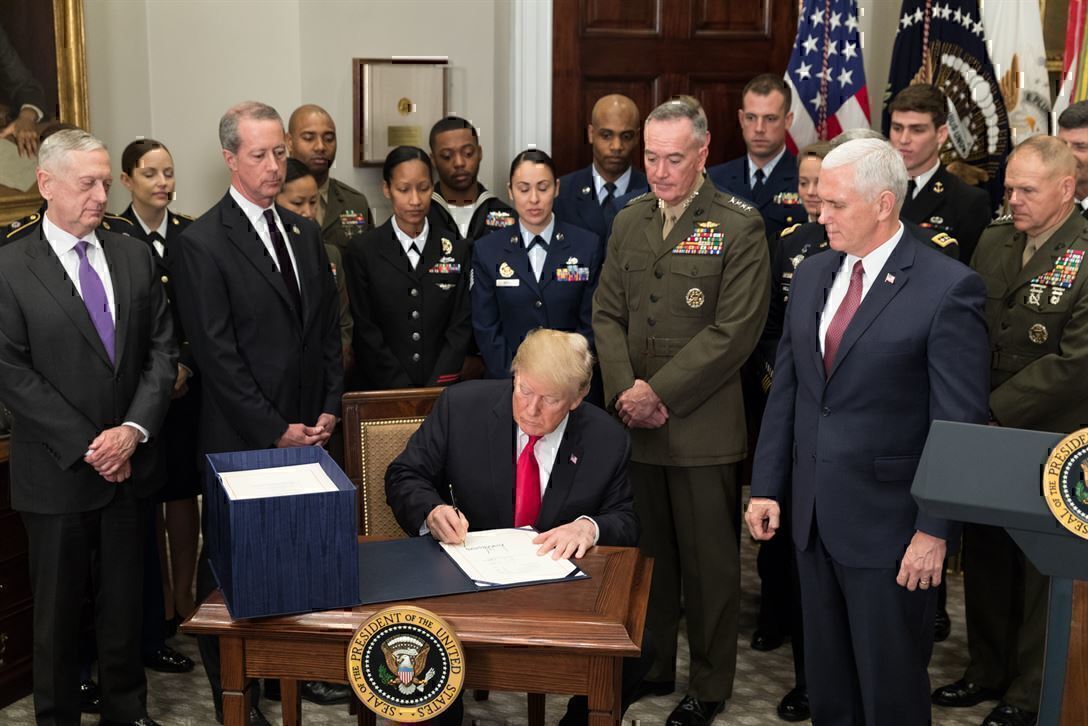 “Our government’s first duty is to its people, to our citizens — to serve their needs, to ensure their safety, to preserve their rights, and to defend their values.” – Donald Trump

President Donald Trump has unveiled a new National Security Strategy which aims to “set a positive strategic direction for the United States, restore America’s advantages in the world and build upon our country’s great strengths”

The President has made it well known, throughout his campaign as well as his time in office, that one of his principle focuses is to secure the United States borders and put into place more stringent immigration laws. This is outlined in the new National Security Strategy as a key part of the plan to protect the homeland.

Jihadist terrorists, who use “barbaric cruelty to commit murder, repression, and slavery, and virtual networks to exploit vulnerable populations and inspire and direct plots,” is the first threat listed. The other is “transnational criminal organizations,” which use drugs and violence to disrupt communities and weaken America’s allies.

The strategy states that in order to deal with these threats, they will be confronted before they reach the United States borders, thus preventing harm to the population. Reactionary measures are also outlined, such as deploying a missile defense system in order to prevent missile attacks.

The plan also mentions measures to protect the infrastructure of the nation, particularly digital networks, which have become more important and vulnerable with technological advances.

President Trump’s stated goal is to strengthen the American economy in order to protect the American people and sustain America as an international power.

In rejuvenating the American economy, Trump contends that America’s workers and companies will benefit, thus ensuring America’s place in the pantheon of international powers. In this rejuvenated economy, America will seek to uphold “fair, free and reciprocal economic relationships.”

Referring to the “21st century geopolitical competition,” Trump notes that America must continue to be at the forefront of technology, research and innovation. Additionally, the United States must protect its innovation from the reach of those who “steal our intellectual property and unfairly exploit the innovation of free societies.”

In an effort to deter hostility, the President claims that America must be “strengthened, renewed and rejuvenated.” America’s military must be further strengthened, in order to “ensure it remains second to none.”

Trump states that continuing to grow in the space and cyber domains as key cogs in “revitalizing capabilities that have been neglected.” To protect America’s interests, it will “use all of the tools of statecraft in a new era of strategic competition.”

Another aspect of preserving peace, Trump notes, is relying on, and expecting more of America’s allies in the way of addressing and preventing common threats. This goes along with Trump’s plan to ensure America’s hand in the balance of power in key parts of the globe.

The new National Security Strategy refers to America as a nation which has been a “force for good throughout history.” In order to uphold this reputation, the President says that America “will use its influence to advance our interests and benefit humanity.”

This will be accomplished by enhancing America’s influence overseas in an effort to protect America’s people and promote their prosperity. Part of enhancing America’s influence, as noted in the strategy, will be continuing to foster positive economic relationships with like-minded states and countries. This will allow America to find new economic opportunities for its people while challenging its competitors.

By championing its values, America can stand as a greater influence on the pursuit of world peace and the development of successful societies.

You can read the official synopsis of the National Security Strategy, as well as the full document here