Tim O’Donnell, Heart Attack Survivor, Gets Back in the Race 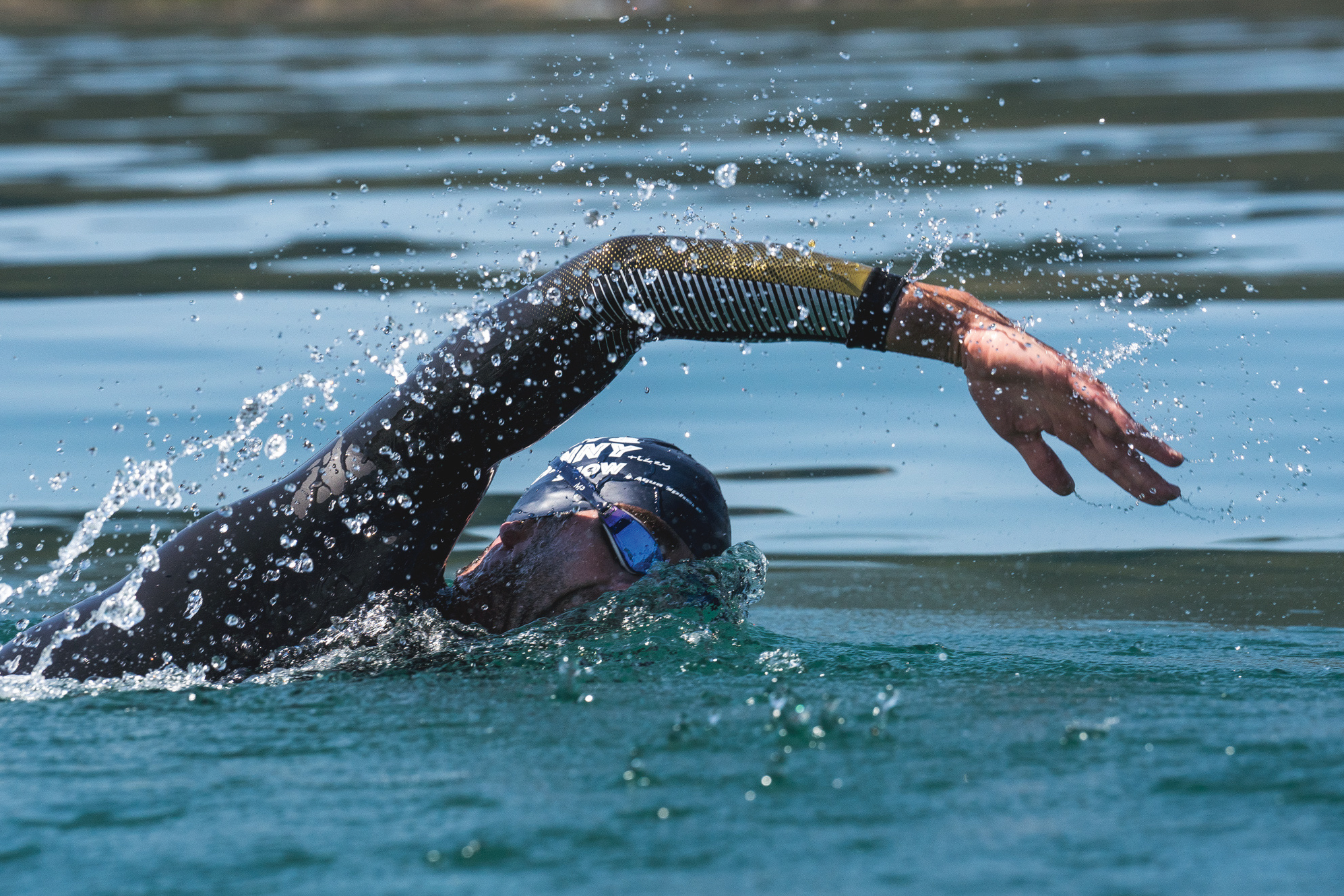 No one paved the course for Navy veteran and Ironman champion Tim O’Donnell. He forged his own way, as a Naval officer and as a world champion triathlete.

With over 50 podium finishes, he’s clearly a great success, but he’s humble enough to point out his challenges, too.

And at 41, the athlete whom insiders call “T.O.” is focused on overcoming the toughest challenge of his life.

During the 2021 Challenge Miami in March 2021, O’Donnell suffered a severe heart attack, one so grim that doctors call it the “widow maker.”

But not for O’Donnell.

How Tim O’Donnell Went From USNA to Ironman

O’Donnell, who was a competitive swimmer and triathlete at the US Naval Academy, had a unique active duty career. Balancing responsibilities to his unit, EOD Group 1 at NAB Coronado, Calif., he gained approval to serve as an active triathlete, which supported the Navy as a public relations and recruiting tool.

“There’s a reason why the military and triathlon are so intertwined,” he said. Former Naval officer John Collins and his wife Judy created the Ironman.

O’Donnell found that the triathlon and his experiences in the Navy challenged his mind in similar ways.

When comparing the two he said, “It’s this test of every aspect of who you are, mentally, emotionally, physically, spiritually. It all comes together in how you test yourself on that one day. And I think a lot of that drive to see who you are and to push the limits, comes from military training and the military background, and the ability to fight through adversity and to problem solve under pressure.”

O’Donnell’s active duty racing career sent him to the US Olympic Training Center in Colorado Springs, Colo. He won the Armed Forces Triathlon Championships six straight times, which he said is “one of the biggest feathers in my cap.”

But competing in Ironman racing, which is a 2.4-mile swim, 112-mile bike ride and a full marathon, was the ultimate goal. After leaving active duty in 2012, O’Donnell devoted his professional life to the sport.

“For me, I’ve really shaped my career around the Ironman World Championship in Hawaii,” he said. “It’s sort of the pinnacle event for the sport.”

In October 2019, he made history as the first American to finish that race in under eight hours, taking second place on the Ironman World Championship’s coveted podium.

Even O’Donnell faced challenges, both on active duty and as a triathlete.

“You have to just accept that as part of your journey, and it’s usually those moments that you overcome that are most memorable, regardless of the result,” he said.

“I’m Tim’s biggest fan and he’s mine, and he’s someone that I definitely know I can go to and have an honest conversation,” Carfrae said. “He understands the dynamic of racing and training and all of that so we can have that… trustworthy sounding board.”

O’Donnell finds strength in his family, which helps him overcome challenges.

“A lot of my why right now is for my kids, is to show them that we don’t give up, and we keep plugging hard,” he said.

In June 2019, O’Donnell competed in Ironman Boulder. Getting to Boulder was hard, as he’d broken some ribs earlier that year.

Then, during the run, his quads fired up, forcing him to walk. In pain, O’Donnell was frustrated.

“And then I saw my daughter on the side of the course,” he said. He remembered why he was there.

“I’m going to get to the finish line and give my daughter a big hug, and I’m going to show her I don’t quit,” he said.

O’Donnell got back into pace, his legs relaxed, and he finished third. It was a memorable experience indeed, as it qualified him to go to the Ironman World Championship that year, where he made history.

“You take quitting off the table, it’s not an option,” O’Donnell said. “And when you remove that from your mind, it’s so much easier to continue to move forward, despite what obstacles lie ahead.”

Racing Through A Heart Attack

One obstacle he wasn’t expecting was a heart attack.

But as he pedaled during the 2021 Challenge Miami, his chest and left arm began to hurt, and his jaw began to seize.

“I said to myself, is this a heart attack?” O’Donnell recalled. “This isn’t the normal pain you’d feel during a race that you just have to push through.”

But his symptoms worsened.

Later, at the hospital, he learned that he had over an 80% block of his left anterior descending artery (LAD). A heart attack indeed.

An LAD blockage prevents blood flow and oxygen to the left side of the heart, stopping normal beating. The American Heart Association estimates that only 12% of people who suffer an LAD heart attack outside of the hospital survive. Survival rates inside the hospital increase to a mere 25%.

When emergency room personnel prepared O’Donnell’s room with defibrillators, he became starkly aware of his situation.

“I asked myself, are you going to die?” he remembered. “And that was probably the scariest moment.”

Overcoming The Challenge & Shifting Your Mindset

But O’Donnell redirected his thoughts to his “why.”

He focused on his wife, two children and life for the long haul.

This helped him through those initial fears, as well as recovery later.

“It’s been a difficult several months,” O’Donnell said. “You
kind of take a moment to just internalize everything and reprioritize what’s important.”

“When Timothy had his heart attack, it just reminded us more and more to live in the moment and enjoy the little things,” Carfrae reflected. “That’s basically what we’ve been doing, just enjoying more time as a family and stressing less about trivial things.”

Training was welcome, but difficult, too. Seeds of doubt held him back at times, and he’s adjusted his routine to training indoors or always with partners for long distances outside.

“That’s just something I’ve had to work through,” he said. “It’s one of those things where it just takes time to become comfortable again.”

Coaches reassured him along the way by focusing his attention on maintaining a healthy heart rate and safe training routines.

“I absolutely love training,” he said, explaining that even when he’s retired, he’ll always enjoy the social, emotional and physical benefits of a good run or ride.

Tim O’Donnell Recovered and Prepares For The Race Ahead

O’Donnell’s diligent and careful work toward a safe recovery paid off. In October 2021, his medical team gave him the all-clear to resume racing.

Certain he still has more to give the sport, he’s kept his sights on the number one spot of the Ironman World Championship podium.

As the 2022 triathlon season begins, a focused and formidable Tim O’Donnell will unleash the competitor that’s been chomping at the bit since March.

“I’ll be back on the start line,” O’Donnell said.

Where can you find T.O.?

Find Tim O’Donnell and Carfrae on YouTube: “The Tim and Rinny Show.” They update fans on O’Donnell’s health, and they also document their unique lifestyle.

On his Youtube show, get the inside scoop on:

For more veteran success stories, employment tips, industry trends, and education resources download the GIJ App. On the app, you can access all the GI Jobs articles, download the full magazines, register for upcoming events, and access the veteran job board.

With Tim’s story in mind, move on to create your own success after the military. Explore career paths you could take in the civilian world by reading the Top 25 Jobs For Veterans.