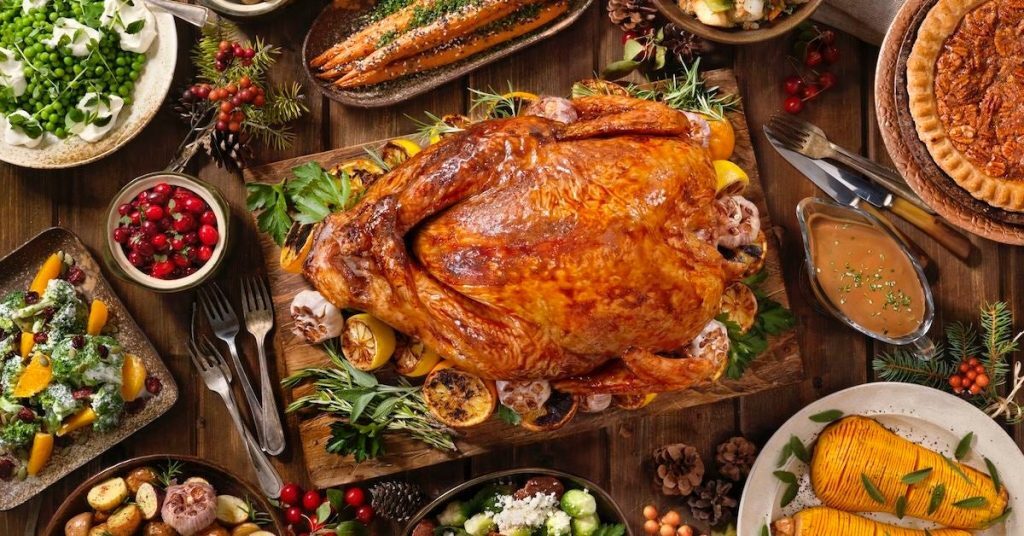 Thanksgiving (the undisputed #1 holiday) is finally upon us. The only day of the year where your aunt’s cooking ability is worth tolerating her 30-minute story about “her church friend meeting Patti LaBelle in 1998.” The only day we brave bumper to bumper highways, chaotic airports, snot-nosed grandkids, and Detroit Lions football. The only day where you see that one cousin who you always forget the name of, but you’re pretty sure it’s Brett (it’s Ted).

It’s all in the spoon-bending, mouth-watering, wrist-quivering name of food. But which Thanksgiving foods are the best? Everybody has an opinion, and here’s ours. Don’t like it? Grab a plastic chair and plop your ass down at the kids’ table.

Corn on the cob

Our list starts off with a classic. However, that’s corn’s Achilles Heel—it’s too classic. We eat corn constantly throughout the year. Thanksgiving is essentially marketed around eating food that you wouldn’t eat outside of special occasions or trips to Boston Market.

Also, corn is fine. It’s not bad. Its complacency is numbing.

Green bean casserole is a wild ride through culinary mayhem. Look at it from a structural standpoint: the entire point of the dish is to then hide it’s main ingredient (the worst vegetable on God’s green earth) in a slop that is, essentially, heated-up cream of mushroom soup. It’s then capped off with yet another polarizing vegetable (onions) that have been fried and breaded beyond recognition, probably for the better…

And yet sometimes, it truly hits the spot. It just has such a low floor. When it’s bad, it is BAD. It’s a casseroller-coaster (sorry).

Mac and cheese suffers from the same contextual affliction as corn on the cob—we simply see it too much during the year. However, mac and cheese gets the slight nod here because of the bells and whistles that come along with Thanksgiving. Is it going to have Panko crumbs on the top? Does it have big fat noodles? Is it going to use 4 different cheeses? These modifications all factor into how good mac and cheese is.

Dinner rolls end up on everyone’s plate, even your sister’s new boyfriend, who claimed to be “gluten intolerant” earlier. It complements every dish. I personally like to squish them into flat space saucers and use them as an edible mashed potato shovel. They’re commonly used to mop up excess gravy. They are a valuable food/tool.

Cornbread gets the nod over the dinner roll for an obvious reason: it’s better. Legend has it that the sweet crumby goodness of cornbread is so pervasive that it was confined into perfect squares to try and retain their buttery deliciousness from ascending physical form.

Turkey sits, perfectly, in the middle of our list at #5. Turkey brought everyone to the party. It’s the glue that holds the holiday together and needs to be respected as such. Sure, it’s dry, and it makes you fall asleep, but so does Jeopardy, and it’s been on TV for 34 seasons. That’s part of the appeal. It is the very thing that Thanksgiving aims for: the warm safe feeling that comes from comfortable homestyle hygge.

Cranberry sauce, the dark horse of the race, brings the tart sweetness you need. It’s loud. It’s bright. It doesn’t give a damn if you know that it came from a can, it wears its rings upon its body like a tattoo of unabashed confidence. Go ahead, slather it all over your turkey, cranberry sauce don’t care. You need cranberry sauce. Cranberry sauce doesn’t need you.

Mashed potatoes are always the first food to run-out, and for good reason. We always underestimate how much we really want it.

It’s a tale as old as time… You scoop out two spoonfuls on the edge of your plate, pile on the rest of your food into a mound and sit down. You munch through your food, parsing out bits of mashed potatoes and gravy on each bite. 30% of the way through your meal, you realize you need more mashed potatoes to continue your breakneck pace. You ask for your uncle to pass it to you. He’s too drunk. He’s singing the praises of Amazon Prime to your grandpa. So you ask your momma. She does so, but not after making a parallel realization and scooping 3 for herself before passing it down the line towards you. Her act of self-preservation sparks a cascading domino effect: every person that touches the bowl takes a couple more scoops on the way to you. Your uncle takes 7. By the time it gets to you, it’s a shadow of a side dish. Your spoon sings the humbling song of metal against porcelain as you scrape what final bits you can find on the walls of the bowl. You make it work. You are jealous of your uncle’s drunkenness, as the earth continues to turn in cold black space, inching ever-closer towards entropy.

Ham goes so hard. Honeybaked ham? Get the f*ck out, it’s amazing. Little bit of brown sugar on ham? Tastes like that pig was proud to die for every bite. It tastes like turkey thinks it tastes. And it doesn’t stop there. It’s the gift that keeps on (i’m so sorry) thanks-giving: it’s the ultimate black Friday sandwich ingredient. If you’re lucky, your grandma will sneak you a gallon ziploc bag of the savory, salty, goodness. Slap it on a warmed up dinner roll with some mayo and cheese for a leftover that rivals the initial product.

God knew what he was doing when he made yams. The ancient Egyptians knew what they were doing when they created marshmallows. The crazy bastard who put em in the oven together had no idea what he was doing. He/She spawned a dish that is equal parts: dessert, side, and angel. If my significant other was dangling off a cliff and candied yams were dangling off a cliff, and I could only save one—then you catch me at my significant other’s funeral with a warm pyrex dish and a big ass spoon.

I’ll bet some of you sick freaks are wondering “where was stuffing on the list?!” The answer is, it is so so so far low on the list, that it is literally below anything has ever been consumed on Thanksgiving since Columbus showed up and committed humanitarian atrocities. How people have convinced themselves that mashed soggy bread would be better if it was stuck in the ass of a bird is beyond me. Then, somewhere along the darkest timeline in history, somebody decided they would dice up celery (a stalk of tasteless future teeth-stuck green string) and toss it in for literally no reason. It is the worst thing that you could eat that starts in the stomach of a turkey and exits from its anus. It is an abomination. I’m embarrassed to exist at the same time as stuffing.