The Army Once Designed Anti-Tank Grenades Out Of Nerf Footballs 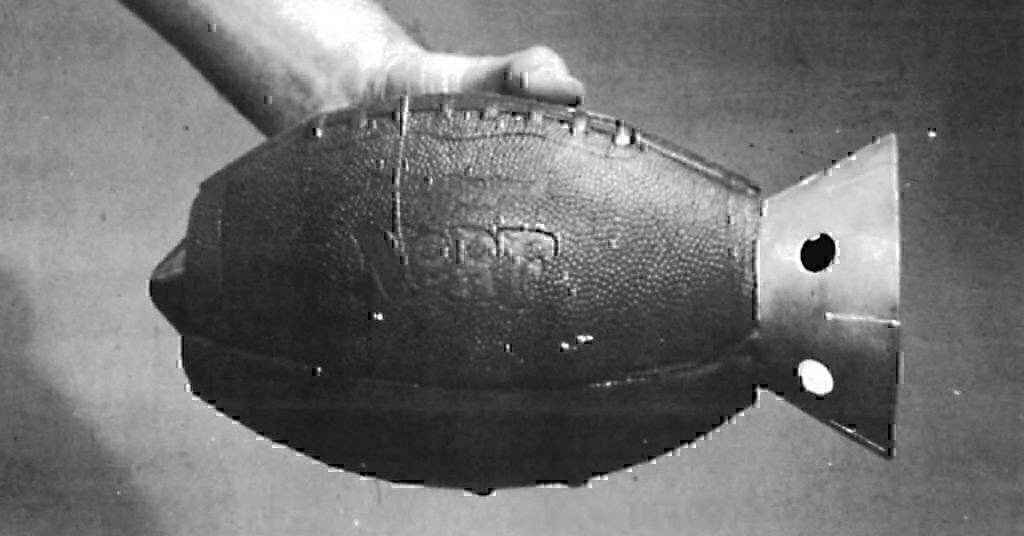 Light, soft and easy to throw, Nerf footballs have been a staple of nearly every American boy’s childhood, helping them play out dreams of throwing a game-winning touchdown pass in backyards and parks across the country.

Because of their small size, light weight and popularity among young males — especially in the military — the US Army once actually tried to turn these toys into deadly anti-tank weapons.

In the late 1960s, Parker Brothers released its Nerf line of toys — foam footballs that would fly longer and farther than regulation pigskins, essentially turning anyone with an okay arm into the equivalent of Joe Montana. Nerf footballs surged in popularity, quickly becoming a best-selling hit for the toy manufacturer.

Around the same time in Europe, Army brass were wringing their hands over the potential for a Soviet invasion that would surely involve mechanized units. Tanks rolling through tight German streets in towns and cities would be a nightmare for American soldiers to deal with, especially since they lacked anti-tank grenades which would be effective against the latest tanks and armored vehicles fielded by the Soviet Union.

Soldiers were completely ill-equipped to wage war against armor in these conditions.

During a possible Soviet invasion, USAREUR troops would have to face tanks like this T-62 in the streets of European cities and towns (Photo Wikimedia Commons)

To fix this problem, infantry commanders at US Army Europe contacted the Land Warfare Laboratory in Aberdeen, Maryland, with the intent of creating a highly portable and easy-to-use hand-thrown weapon which could quickly disable a tank at close quarters. Engineers theorized that a football-shaped grenade would be a decent concept to explore further because “most U.S. troops are familiar with throwing footballs,”  as the official test report read.

The lab came up with a prototype that consisted of a hollowed-out Nerf football, packed to the brim with explosive charges and a detonator. The working theory was that once thrown, the football grenade would spiral perfectly up to a tank and blow up, irreparably damaging the vehicle and rendering it useless. This would do well for USAREUR soldiers fighting off a possible Soviet invasion.

The M72 LAW was the Army’s standard infantry anti-tank weapon, though it could not be safely used in close-quarters situations (Photo US Army)

Theories don’t always equate to reality, however. In tests, the flight path of the football grenade was scarily unpredictable, thanks to the uneven weight distribution inside the device. Instead of a toss that would be worthy of an NFL scout’s approval, the grenade fishtailed and spun wildly.

By this point, it would have been more of a danger to the troops who were issued it than the tanks it was designed to destroy.

Interestingly enough, this wasn’t the first time the military had tried to relate sports to warfare. Around the time of WWII, it was largely assumed that every young American male would hypothetically be able to throw a baseball with a decent level of accuracy. To that end, the Office of Strategic Services tried to develop and field a hand grenade with a size and weight similar to that of a regulation baseball, known as the BEANO T-13.

A T13 on display at the CIA’s official museum. The OSS, which came up with the idea of the T13, served as a predecessor to the CIA (Photo Wikimedia Commons)

As with the Nerf anti-tank grenade, this project proved to be highly dangerous to the troops who were issued these unique weapons in limited quantities. Grenades would often ignite prematurely after being armed or even if just jostled around, maiming the soldier or OSS operative attempting to use it against Axis foes. By the end of the war, an order was passed down to destroy all T-13s, though some inert models still survive today as curiosities for collectors.

Fast-forward to 1973, and the Nerf grenade project was killed off altogether. Despite the Land Warfare Lab’s efforts, USAREUR never received the anti-tank grenade it sought, leaving troops to have to rely on M2 heavy machine guns and M72 Light Antitank Weapons, which both required a degree of separation between themselves and the targets for effective usage — completely unfeasible in close quarters battle.