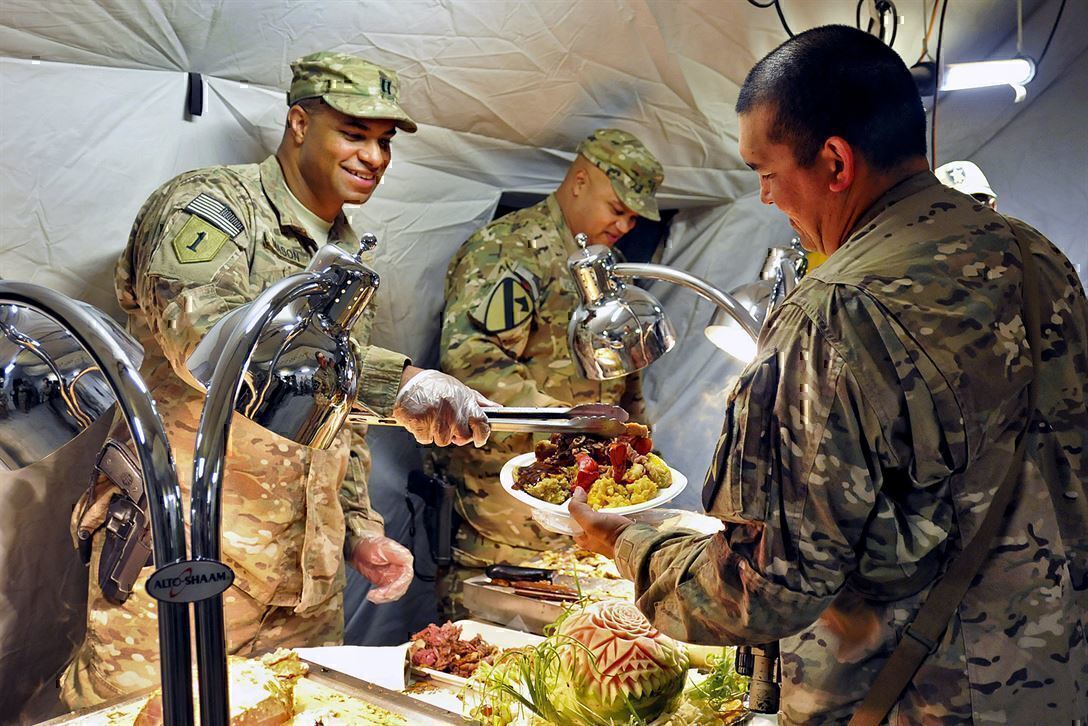 Thanksgiving is here and I can almost smell the deep-fried turkey, I can hear the buzz of an impassioned sports debate and I can see a snoring relative that had too much turkey and egg nog. Thanksgiving is rooted in a historic tradition, and within it you’ll likely find any number of smaller traditions specific to the families and friends that celebrate the holiday.

Mini traditions like a family football game, special recipe, or a group walk have become just as much a part of the holiday as the Thanksgiving turkey. The idea of holiday tradition is of particular importance to me this year as my wife and I will be celebrating Thanksgiving with our newborn son for the first time.

This special occasion has encouraged me to examine how my relationship with Thanksgiving and its emphasis on tradition has grown throughout the years. The Thanksgiving traditions I had at home and experienced in the military will undoubtedly form those my wife and I share with our son.

At these gatherings there were of course the near-mandatory and universal traditions to uphold. There was your standard golden brown turkey, flanked on all ends by an assortment of sides and fixings. Mashed potatoes, buttered dinner rolls, cranberry slices and more, all strategically placed on a table that could barely sustain the weight. Around this table would be our family and friends nervously awaiting their turn to detail what they were thankful for, despite having a whole year to think about it.

When acting out these tried and true American traditions, new family-specific ones began to emerge. One year my dad and I decided to deep-fry a turkey as opposed to smoking it. I would fill the pot with oil, place it on the burner, he would light it, and together we would slowly lower the turkey in. We did this the next year, the following year, and every year after until it had quietly become a family tradition.

Our guests began acting out their own traditions over the years. Different relatives were responsible for certain dishes, and certain cousins were always tasked with clean-up. As I look back on those holidays I can see now that these traditions were implemented to maximize holiday efficiency. With a well-organized day, we could make the most out of our time together.

When I left home for the Army at 20 years old, I had no idea that I wouldn’t return home for another Thanksgiving for at least the next decade. My first November in the service rolled around and with it came an intense nostalgia for my family’s Thanksgiving Day traditions. What I soon realized is that I had joined an entirely new family, one with much older holiday traditions of their own.

When Thanksgiving arrived all of the lower enlisted soldiers were instructed to make their way to the dining facility. I showed up as instructed and was immediately taken aback at how impressively decorated the entire dining facility was.

Orange and brown streamers dangled from the ceilings, walls were plastered with cartoonish illustrations of turkeys and pilgrim hats, and each table was set with sparkling grape juice. When I looked behind the counter, I was shocked to see every member of the leadership team fitted in their dress uniforms, fixed with aprons and utensils, serving Thanksgiving dinner to all of the soldiers.

It was surreal but I knew that I had just become a part of a long-standing military tradition, leaders eat last. Years later and thousands of miles from home in Afghanistan, Thanksgiving found me on a small combat outpost. Even in a remote area of a foreign country, the Army made an effort to ship us a Thanksgiving meal including a number of decorations to beautify our living space.

With our Thanksgiving rations running thin and very little turkey to spare, our company leadership’s adherence to military tradition did not waiver. They remained behind the counter, serving dinner to the soldiers until the last slice of turkey was gone.

When I look forward to building a Thanksgiving day tradition with my wife and son, I will do so with an eye towards my childhood. In those days I learned how important it is to embrace the traditions of the past, while leaving room to create new ones. I will also pull from my time in the service, which taught me to not only acknowledge the importance of traditions but to respect them. Thanksgiving has become a day to not only give thanks, but one to connect us to our pasts and futures through tradition.

READ NEXT: WHAT I LEARNED ENDURING COLD WEATHER IN THE ARMY