Why It’s Awkward to Thank Veterans on Memorial Day 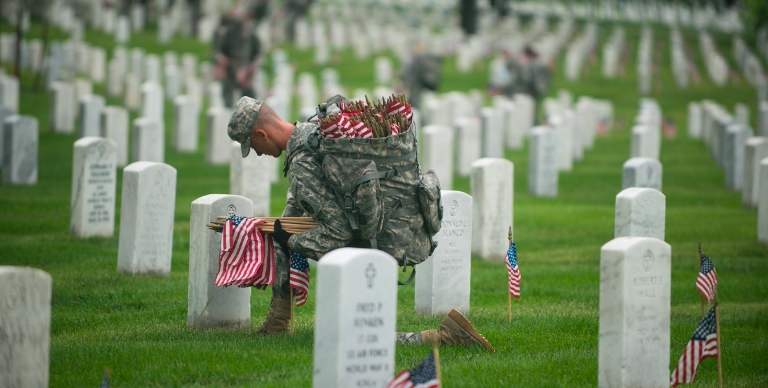 Thanking those who served is always appreciated. Nearly every single veteran signed on the dotted line to contribute to something bigger than themselves and, when civilians extend their gratitude, the good will is reciprocated — that is, on any day outside of the last Monday in May.

Yes, the gratitude is always welcomed, but Memorial Day isn’t the time. If prompted, nearly every veteran will give a polite response along the lines of, “thank you for your sentiment, but today is not my day.”

Memorial Day is a day that’s often confused with Veteran’s Day (November 11th) and Armed Forces Day (the third Saturday in May). While most countries around the world remember their fallen troops on Armistice Day (which commemorates the signing of the treaty that ended World War I — also November 11th), the United States of America began its tradition of taking a day to remember the fallen shortly after the end of the American Civil War.

In its infancy, the holiday was also called “Decoration Day” and generally fell on or around May 30th — depending on where you lived. It was a time when troops, civilians, family, friends, and loved ones would visit the graves of fallen Civil War troops and decorate them with flowers in remembrance.

It was expanded after WWI to include all fallen troops from all wars.

The date was chosen because no major battles had taken place on that day — instead of honoring those died in a single battle, mourners could remember all who fell. It was also around the time most flowers started to bloom in North America.

After World War I, the country gradually transitioned to using Memorial Day as a way to honor fallen troops from every conflict. The celebration was kept around the same date and, on this day, the nation still decorates the graves of fallen troops with flags and flowers.

The final Monday in May became a federal holiday with the creation of the Uniform Monday Holiday Actand was chosen out of convenience. It gave every American a federally recognized, three-day weekend in order to continue the tradition of honoring those who sacrificed everything for our freedoms.

As pleasant as it is to enjoy time off and a cookouts are, it turned into a double-edged sword.(Photo by Senior Airman Brett Clashman)

The convenience of this three-day weekend was noted in a 2002 speech by the Veterans of Foreign Wars, who said the change undermined the meaning of the day to the general public. To many, it also marks the unofficial beginning of summer, a time filled with barbecues and trips to the lake.

Now, that’s not to say that these pleasantries should ever stop — Americans enjoying their freedoms is what many troops fought to uphold. It’s important to remember, however, that day has, and always will be, in remembrance of the fallen. It’s a day of solemn reflection most troops and veterans spend thinking of their fallen brothers- and sisters-in-arms.

If a veteran can make it there, this is generally how they spend their three-day weekend. If they can’t, this is where their head is at.(Photo by Senior Airman Phillip Houk)

To properly thank a veteran this Memorial Day, visit one of the many national cemeteries and join them in placing flags, flowers, and wreaths on the graves of those who deserve our thanks. To find a national cemetery near you, please click here.

READ NEXT: 10 OF THE MOST INTENSE BATTLES IN US HISTORY