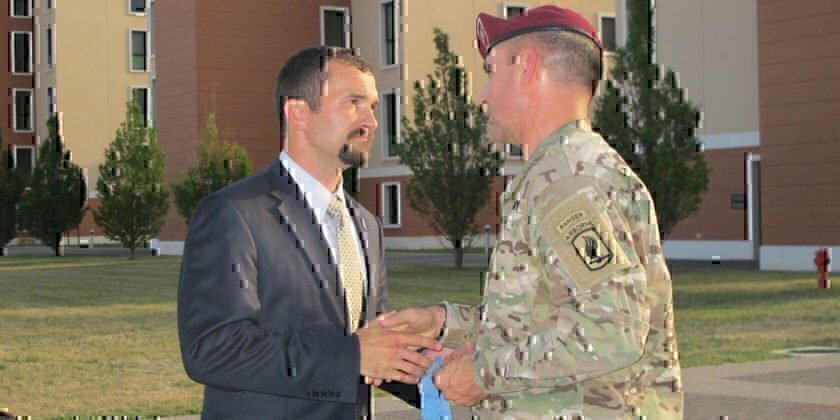 VICENZA, Italy — The Medal of Honor has always hung heavily around Staff Sgt. Salvatore Giunta’s neck. On Wednesday, he finally got to take it off.

In a ceremony marking the 173rd Airborne Brigade’s new memorial to all the brigade’s soldiers who earned the military’s highest award, the former Subway sandwich maker unfastened the medal’s blue ribbon from his neck and handed it over to the brigade commander.

“It can’t be with me because it’s ours,” said Giunta. In 2010, for his heroic actions during an ambush in Afghanistan, became the first living man to earn the medal since the Vietnam War.

“I want this to stay in Vicenza, Italy, with the 173rd, with the men and women who earn this every single day through their selflessness and sacrifice,” he said.

Giunta’s gift to the brigade came near the beginning of a casual, 45-minute event in which privates, children and civilians strolled with war heroes, sergeants major and a major general along a brick walkway on a balmy Italian evening. The walkway, stretching from the brigade headquarters to the gym, is lined with 18 memorials to men who, on what was frequently the worst and final day of their lives, displayed conspicuous gallantry and uncommon valor.

Two fought in World War II, 13 fought in Vietnam and three fought in Afghanistan, including Giunta, Sgt. Kyle White and Staff Sgt. Ryan Pitts. All are remembered with a stone pedestal bearing plaques that show their faces and recite their heroic deeds.

Brigade commander Col. Greg Anderson says the 173rd is the most decorated brigade in the Army. “I don’t say that to brag. I don’t say it as a point of pride,” he said. “I say that to emphasize that the brigade has always received the difficult missions.”

Giunta, then a 22-year-old specialist with B Company, 2nd Battalion, 503rd Infantry Regiment, was several nights into an October 2007 mission in the Korengal Valley when his unit was ambushed and began taking casualties. He repeatedly exposed himself to fire to pull fellow soldiers to safety and threw grenades to advance into a wall of bullets, Alone he charged headlong as bullets whizzed past toward enemy fighters, whom he saw carrying off a wounded American, one of his best friends.

“Sal never broke stride. He leapt forward. He took aim. He killed one of the insurgents and wounded the other, who ran off,” President Barack Obama said at Giunta’s ceremony.

Such losses make it hard for surviving soldiers to accept their medals for heroism. So does the military “band of brothers and sisters” ethos: No one does anything alone. “Hearing the Medal of Honor is like a slap in the face,” Giunta told Vanity Fair several years ago. “I don’t think you know what I did. I didn’t do s—.”

Giunta has spent the past several years on the speakers’ circuit. In a few weeks, he will be an economics major at Colorado State University. His wife, Jennifer, a registered nurse, attended the ceremony and took all the adulation of her husband in stride. “We have a regular life at home,” she said. The couple have two children.

The brigade had planned to bring retired Lt. Col. Alfred Rascon to the event. Rascon, who was unable to attend, was awarded the Medal of Honor in 2000 for his actions as a medic in Vietnam in 1964, when he repeatedly used his body to shield the men he worked to save from enemy fire.

But other Vietnam vets made the trip, including Dave Gardner, from Memphis, Tenn. “We were the beginning of this,” he said, referring to the 173rd’s storied involvement in Vietnam.

“You want to see what people are doing with your legacy.”

Gardner, 70, who said he spent 43 months in combat and whose son is an Army Ranger now in Iraq on his fifth deployment, assayed the new memorial. “Marvelous,” he said.

READ NEXT:  6 Jobs in the Military That Require Insane Brainpower