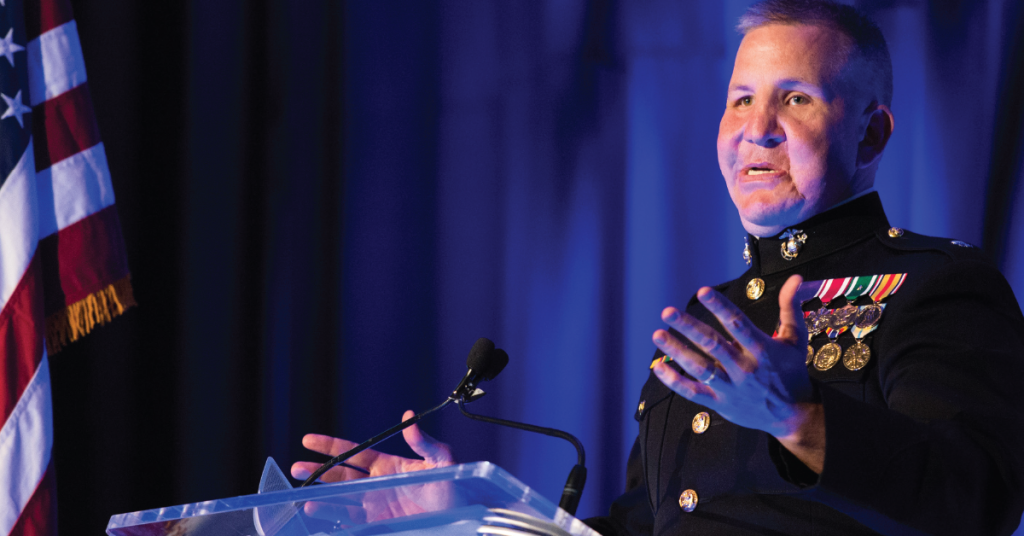 It is impossible to tell just how many people Justin Constantine inspired. A wounded warrior who became the face of post-9/11 veterans, Justin had an enormous impact on the world around him. He not only survived a horrible wound in Iraq but thrived for years afterward inspiring others while achieving his own dreams. His dogged determination, insatiable appetite for life and message of hope inspired everyone who encountered him, from those closest to him to strangers who simply followed him on social media.

“When I think of Justin I just think of endless laughter, and endless love, not just for me, but love of other people and love of life and the world around him,” said Dahlia Hamza Constantine, his wife of 14 years.

We decided early in 2022 to devote the cover story of this issue—which celebrates 250 issues of G.I. Jobs—to Justin. At the time he was battling Stage IV prostate cancer—his second fight for life. Yet he agreed to participate in the project because he had no intention of quitting. He was still fighting when he died on May 5 …at the age of 52.

“In my mind he very much is the hero who died on the battlefield, in the middle of battle,” Dahlia said.

‘You Are Stronger Than You Think’

G.I. Jobs first published Justin’s story in July 2016. He was promoting his first of two books titled, “My Battlefield, Your Office” and shared lessons on leadership with our audience. Justin had already become a popular motivational speaker. In 2015 he gave a lecture at TEDxBeaconStreet, where he mesmerized the audience with the story of his horrific injury in Iraq and how he overcame obstacles in the aftermath. Some audience members at the “You Are Stronger Than You Think” lecture wiped tears from their eyes as he shared his story. Others shook their heads in disbelief. Some sat transfixed by the courage of this veteran to speak in public despite his disfigured face and difficulties speaking.

Justin joined the Marine Corps in 1997 while attending law school at the University of Denver. He served six years active duty as a Judge Advocate (JAG) before separating in 2004.

He met Dahlia in the spring of 2006 at a Spanish immersion language class in Argentina. Justin made an immediate impression.

“He walked in the classroom and he was a force to be reckoned with. He was a force of nature,” she recalled. “And I think a lot of people pay attention to his life post-injury and everything he’s accomplished, but he just walked into a room and he kind of owned the space.”

They began dating before he returned to Virginia and she to California.

In September 2006, Justin deployed to Iraq as a civil affairs officer with the Marine Corps Reserve, leading a team of eight in Al-Anbar Province. Dahlia was in Cambridge, England, working on a doctoral degree in teacher education. They communicated frequently, and she talked to him the night before he was wounded.

“He said he was going outside the wire the next day but don’t worry he was going to call me by the time it was my morning,” she said.

The call never came. During a combat patrol on Oct. 18, 2006, Justin was shot in the head by a sniper. He wasn’t breathing when the corpsman with his team rolled him over, performed rescue breathing and conducted an emergency tracheotomy to keep him alive.

Dahlia immediately traveled to see Justin at Landstuhl, Germany. He was heavily sedated, the doctor warned, and probably wouldn’t recognize her. He had suffered extensive damage to his face, the doctor warned.

During his long recovery at Walter Reed National Military Medical Center in Bethesda, Md., Justin endured more than two dozen reconstructive surgeries. His work as an ambassador for wounded warriors began there.

“When he was in the hospital, someone came by with a Wounded Warrior (Project) backpack. And that just meant a lot to Justin. And Justin started doing things to help other wounded warriors.”

Justin received the George C. Lang Courage Award from the Wounded Warrior Project, which led to his involvement with the nonprofit’s programming and ultimately nine years on its Board of Directors.

“It was this slow evolution of one thing leading to the next that led to all his work with wounded warriors. And then other people who were struggling … people who were formerly incarcerated, people with disabilities.”

Justin’s career as a motivational speaker began as modestly as his work with wounded warriors. He was invited to give a speech at the fundraising gala for a state trooper and Marine veteran who was killed in the line of duty.

“We sat with his family, and I just remember looking at that woman’s face, with his wife and his kids, and thinking, ‘I don’t know how she handles this,’” Dahlia said. “Who knew that would be me? I thought the worst was behind us, right?”

On the way out, the couple was handed an envelope full of cash. The idea that people would pay him to speak inspired his own business as a motivational speaker. It also led to his first Ted Talk, “You Are Stronger Than You Think.” The audience gasped when Justin showed a photo of his swollen face during his recovery on the large screen on stage.

“I can’t see out of my left eye,” he told them. “I can’t run any more because the doctors removed bones from my legs and from my hip to use in reconstructing my upper and lower jaw. I also am missing most of my teeth and the end of my tongue, and as you can tell I can’t speak perfectly clearly. I also suffer from Post-Traumatic Stress and Traumatic Brain Injury. But you know what? I’m the luckiest person you’ll ever meet.”

He emerged closer than ever to Dahlia, he said. He also found a resilience and strength he never knew he had.

“We’re all stronger than we think we are, and we’re all capable of doing amazing things. And it’s important to remember that when you’re having a bad day, or a bad week, or a bad month. And it feels like your whole world is caving in around you. Because if you dig deep, you’re going to find resources you may not know you had before.”

‘Live Life in the Future’

It was the foundation of a message Justin would share again and again over the remaining years of his life, even as he pursued his dreams. Justin was the Honor Graduate of his class at the Marine Corps Command and Staff College. In 2015, he graduated on the Dean’s List from Georgetown University with an advanced law degree focusing on national security. That same year he co-founded the Veteran Success Resource Group, a nonprofit organization that provides networking events for veterans and their family members. He published two books.

“I want to live life in the future, not in the past,” he told the Tedx audience. “I’ve learned through inner strength and humility and the victorious spirit we’re each capable of doing amazing things. I’m not defined by what happened to me in Iraq, but what I’ve done since then.”

Justin received numerous awards for his work as a veterans advocate. He was named a Champion of Change for Veterans by President Barack Obama and was one of the wounded warriors painted by President George H.W. Bush in his book “Portraits of Courage.” He led the Wounded Veteran and Caregiver Program for the US Chamber of Commerce Foundation’s Hiring Our Heroes initiative. In 2018, Justin became the chief business development officer for JobPath, a company that provides employment and transition services to veterans.

“Justin’s contributions to support veteran hiring will stand the test of time,” said Jack Fanous, CEO and co-founder of JobPath. “Within our company alone, his work has already helped thousands of military veterans–many of whom had recently separated from the military–build their career skills, discover what industries are the best fit for their civilian future, and find a career that will help them provide for their loved ones.”

Justin was diagnosed with Stage IV prostate cancer in February 2020. The aggressive cancer had already spread to his bones and lungs. Like every other battle he had faced, Justin met this one head on.

“We leaned on the Iraq injury to get us through a lot of it,” Dahlia said. “We leaned on the fact that we had been down this road before, that Justin wasn’t meant to survive the injury in Iraq but here he was.”

Justin never quit. Two days before he died he was making sure he had enough calories passing through his IV and talking about his workout plan.

”I have a beautiful love story that is now, I hope, eternal,” Dahlia said. “It survives death. I had 16 years on earth, in physical form, with this incredible man. Those 16 years are better than some people’s 110 years.”

Dahlia will soon finish her Ph.d. She recently sold her first children’s book and plans to pitch headlong into a career as a children’s book author, a dream Justin encouraged and championed.

Dahlia and Justin’s closest friends want the world to know about the real Justin Constantine.

“He’s this icon in the wounded warrior space. He’s met presidents, he’s done this, he’s done that. But to us he’s this goofy guy,” Dahlia said.

“We want Justin admired for his courage and his bravery and his public persona, for sure. We also want everyone to know that here is this man who also loved Shakespeare, and who helped baby bunnies, and who loved photography and learning languages and learning to cook and learning everything. And reading. And all of these things. That’s the Justin I wish everybody could know. Yes, he’s the man who did all these amazing things. But the man just had an insatiable appetite for life.”