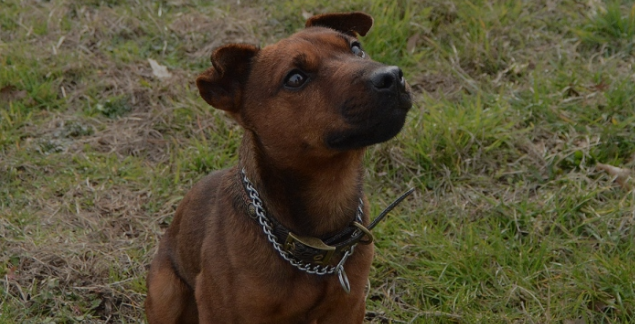 There’s a pint-sized pup preparing to sniff out drugs on the world’s largest naval base.

Meet Puskos, a 15-pound Jagdterrier who is about a fifth the size of a typical military working dog at Naval Station Norfolk.

Puskos’ small stature allows him to fit into tight spaces aboard ships and submarines that would be difficult for a much larger German shepherd or Belgian Malinois. Another advantage of a small dog is that Puskos will be easier to carry down steep ship stairwells. He is the only small dog assigned to Naval Station Norfolk and expected to be certified to search for narcotics by the end of the month.

Puskos and Japec have been working together since late January, and Japec acknowledges he was taken aback at first when he learned who his partner would be.

“My first reaction was like, ‘Whoa.’ When you think of a military working dog, you think of an 80-pound German shepherd or something like that,” he said. “I was excited just because there’s less than five small-breed dogs like that in the Navy.”

The Jagdterriers were bred from fox terriers, English wirehaired terriers and Welsh terriers. The result was a courageous breed that takes pleasure in work, according to the federation.

That’s Puskos in a nutshell.

Puskos’ reward for doing as he’s commanded is an orange rubber ball that he loves to chew on.

Puskos can be a little stubborn at times, so Japec carries two balls in case he needs to use the second one to regain his attention. The pair were still working to strengthen their bond recently on the base’s obedience course.

Japec as part of the team’s training has a distinct way of saying “Good boy!” to reward Puskos with praise, recognizing that he might not always have an orange ball with him. Japec also likes to make sure Puskos gets plenty of playtime so it’s not all work and no fun.

At 2 years old, Puskos is fully grown and easy to miss, but he already has fans. He’s appeared on the front page of the base newspaper and on television. Passersby stop to watch him work out on the obedience course.

It all results in a lot of attention for which Japec’s colleagues are all too eager to make fun.

“They call me and him movie stars, and if you want to interview me you’ve got to talk to my agent,” Japec said. “But I figured it would be like that when I got him.”

>>>Continue Reading at the Virginian Pilot!