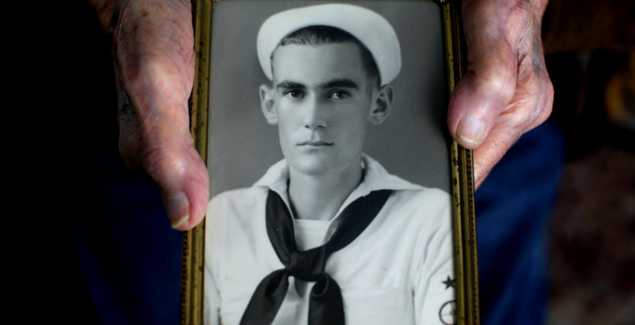 When Robert Greenleaf closes his eyes, he still sees the red circles painted on the wings of Japanese warplanes headed toward nearby Pearl Harbor.

He was 19 then, a gunner’s mate third class in the Navy. Suddenly, he was at war, frantically loading Browning .50-caliber machine guns.

“When we saw the red meatballs on the wings,” he recalled, “we realized who they were.”

Greenleaf, now 94, is among a dwindling number of veterans who were on the Hawaiian island of Oahu on Dec. 7, 1941, when a Japanese surprise attack killed more than 2,400 people, and propelled the United States into World War II.

Now, 75 years later, the impact of that day — ingrained in the psyche of earlier generations — is softened by the passing decades and the more recent tragedy of Sept. 11, 2001.

“I asked a girl one day at the high school track what she knew about Pearl Harbor,” Greenleaf recalled, “and the girl said, ‘Who is she?’ ”

On Wednesday, remembrance ceremonies at Pearl Harbor will be the last time that survivors gather on a milestone anniversary of what President Franklin D. Roosevelt called “a date which will live in infamy.”

The number of living veterans of the Pearl Harbor attack is not known, according to the Pentagon and Navy.

But Lou Large, departing president of the Sons and Daughters of Pearl Harbor Survivors, said he had heard only 400 remain alive. Of that number, only dozens are expected at the ceremony, a Navy spokesman said.

Greenleaf, who is house-bound, does not plan to be there. Neither does George Hursey, a 96-year-old Brockton man attached to the Army artillery on Oahu 75 years ago.

As vivid as those memories are for Greenleaf and Hursey, that day is ancient history for nearly everyone else.

Shane McKenna, a 26-year-old student at the University of Massachusetts Boston, expressed surprise on a recent day that the Pearl Harbor anniversary was approaching.

“People respect it, but not like it used to be,” McKenna said. “No one saw it happen.”

Nate Goudreault of Allston, another UMass Boston student, was not aware of the upcoming milestone. Much of his generation, the 21-year-old said, is focused on the turbulent world of today.

Like McKenna, Goudreault cited 9/11 as his generation’s touchstone tragedy — a “globalized issue” like the attack on Pearl Harbor that has affected the country for years.

Boston University professor William Keylor, who teaches history and international relations, said the 2001 attacks without question have surpassed the memory of Pearl Harbor.

Not only is 9/11 closer in time, but the attacks on the World Trade Center were directed against civilians instead of the military, Keylor said. Nearly 3,000 people died that day.

In 1941, Hawaii was not yet a state but a faraway territory. And before 2001, the American mainland had not suffered a large-scale attack by a foreign enemy since the War of 1812, when British troops burned Washington.

Still, Keylor said, many of his students are familiar with Pearl Harbor’s iconic place in American history — including students from Japan.

“They were very aware of the situation and quite interested in it,” he said.

A map of the island of Oahu, showing the deployment of Japanese planes that day, is on one wall in his ranch home. Near that is a World War II poster extolling the Merchant Marine, which Greenleaf joined after his Navy discharge in 1943.

On a table below them is a photograph, taken three weeks before the Pearl Harbor attack, of the newly promoted teenager.

“The years have gone by awful fast, I’ll tell you,” Greenleaf said, shaking his head slightly. “It feels more like 75 months.”

But after three-quarters of a century, Greenleaf’s memory of the day remains filled with specific detail — the sights, sounds, and feel of a lazy Sunday morning that quickly turned horrific.

He was in a beachside tent when the attack began and mistook the first explosions for practice rounds by US coastal artillery. Then, he saw a squadron of Japanese torpedo planes headed for Battleship Row.

Later, Greenleaf and others at the machine-gun school targeted Japanese aircraft that were firing at American B-17s that had arrived by chance during the attack.

Three Japanese warplanes were downed, Greenleaf said. Each hit was greeted by a roar “like scoring a touchdown at a football game.”

Only afterward did Greenleaf learn the extent of the day’s stunning blow: 18 Navy ships sunk or badly damaged, including eight battleships of the Pacific Fleet, and more than 340 aircraft destroyed or damaged. At least 1,177 lives were lost when the battleship USS Arizona exploded and sank.

Greenleaf was back on his destroyer about 10 days later, eventually sailing between Hawaii and San Francisco as convoy protection and then joining a US task force to South Pacific locations such as the Marshall Islands.

By the time of his discharge, Greenleaf recalled, “I was 6-2 and 120 pounds. They worked us to death, three hours of sleep a day, every day.”

Greenleaf said he tried to reenlist in 1943 but was rejected, opting instead for Merchant Marine duty that took him to England several times with aviation fuel, as well as to the African port of Dakar. He remained at sea until 1951 and eventually worked at Savage Arms in Western Massachusetts and as an independent firearms consultant.

Despite the hardships, Greenleaf looks at the war as a special time.

“Those were the best years of the country, in a sense. There were no slackers,” he said. “The good thing, in a way, about the Pearl Harbor attack is it made the entire country have the same goal.”

On that day, Greenleaf said, he simply did his job — like everyone else around him on a morning they never forgot.